Chocolate and Asphodel is a slash anthology e-zine that focuses on the Lupin/Snape pairing. Contributors included members of the Lupin/Snape Lurve Livejournal community.

Chocolate and Asphodel 1 was published in June 2007 and contains 219 pages. The PDF is formatted for letter-sized printing and there are several full-colour pieces of art, as well as graphic stories, the debut of a doujinshi group, and other art and fic in a range of ratings. You can download it here. 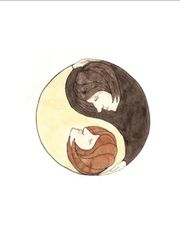 back cover of issue #1, "Two Dream" by Xterm
The acknowledgment:

In some ways, the internet is a boon to fans in that it offers us quick access to all the fanfiction and fan art we could want; it's easy to find, and it's easy to post, making the process a great deal simpler for 21st Century writers, artists, and readers. But in some ways, the internet has diminished the anticipation and specialness of each work of fanfiction and fan art; instead of it being a rare treat, we can mass-consume it, picking and choosing among hundreds, perhaps thousands, of pieces in a single archive.

But that wasn't always the case. Before the internet, 'zines were the only means of sharing fanfiction and fan art. 'Zine is short for "fanzine", which is short for "fan magazine", and the first acknowledged fanzine was published around 1930. They were used primarily as a means of communication at first, produced on mimeograph machines and sent via snail mail, but gradually, 'zines grew to include fanfiction, poetry, filk songs, art, and other expressions of fannish creativity as well. As technology improved, so did the quality of the 'zines, and they continued to be distributed by mail or at conventions. With the rise of the internet and the creation of countless websites, mailing lists, message boards, journal communities, and other forums for communicating with other fans and sharing fanfiction and fan art, 'zines have seen a decline in recent years, although they are still published, and they can be found in stacks or boxes in the dealer's room of many conventions. As a long-time member of off-line fandom who began reading and collecting 'zines around twenty-five years ago, I'm delighted that our ship has one, albeit in electronic format, and I hope readers will go to the trouble of having it printed and bound, if possible. Downloading from a mailing list, journaling service, or website and printing it out is a nice way of preserving stories and art you know you want to revisit, but it's not quite the same thing as holding a 'zine in your hand, feeling its weight and knowing you're about to delve into the collaborative efforts of other fans who devoted their time and energy to creating it. And 'zines do take time, energy, and a host of people working behind the scenes to make everything come together, which is why we must stop and thank the contributing writers and artists who created the content and the editors who vetted the submissions and proof-read/-viewed the material that was chosen for inclusion: Arionrhod, busaikko, Cordeliadelayne, Kellanine, Snegurochka Lee, and Xochiquetzl. Special thanks go to lore for organizing the zine and to Karasu Hime for her hard work on the layout. She went above and beyond the call of duty to create something visually special for us all.

The stories and art in this 'zine all pre-date the release of Harry Potter and the Deathly Hallows, but I'm certain that won't curtail anyone's enjoyment of them. It was a labor of love for all involved, and on behalf of the editors and contributors, I hope our readers enjoy the results as much as we enjoyed putting it together. -- McKay

OhmygodOhmygodOhmygod!!! This is amazing! Beyond amazing. The work that must have gone into it - it's extraordinary. Thanks lots of tons to all the wonderful talented and generous folks who made this happen. An embarrassment of lovely Snupin riches! [1]

Ooh, what a spectaular surprise, and right before the incredible nirvana of Snusa!! I'm beyong bliss. It's so beautiful and perfect, the best thing we could ever hope to have. I cannot wait to dive into the Snupiny goodness! Thanks so much to everyone who contributed and graced our happy community with this gorgeous work! I <3 every single one of you! [2]

Holy shit! This is incredible! I knew there was a reason for ordering the new colour photocopier/printer for work last week but I didn't know it'd get a workout like this so quickly.

Now I have a huge dilemma; do I not read the electronic version until the photocopier arrives and is installed and then I can print it out and enjoy it over the Christmas break? Or do I read it all now and then read it again? Urk! I'm conflicted!

You guys are absolutely marvellous. Seriously. What a fantastic Christmas gift for the Snupin fandom! Thank you! [3]

OMG! OMG! You guys are the bestest and greatest and most amazing people EVER. I was getting frustrated because I´m broke and woudn´t be able to buy it, and then- awww I love you.[4]

Woah, this is awesome. I've only looked through the art so far, but I must post some comments!

-The doujinshi was awesome. I love the idea and the execution, and I don't know why, but the panel with the house elves taking the decorations up the stairs makes me squee a lot. -I love the style of xterm's pieces, they're quite different from what she (you? haha, I can't decide who I'm addressing this to.) has done before, a bit bolder and both of them really gorgeous. -neodandiesrule, I love the cliche images in the corners muchly. ;) isildurs_babe (I assume?), I love the alphabet and the genre drawings! karasu_hime - The layout of the book is beautiful, all the fonts/flourishes/etc are well picked and the colours of the cover are gorgeous!

The rest of the art was wonderful too, but these were the things that impressed me personally the most. :) [5]

Chocolate and Asphodel 2 was published in November 2009 and contains 141 pages. The PDF is formatted for letter-sized printing and there are several full-colour pieces of art, as well as illustrated stories. 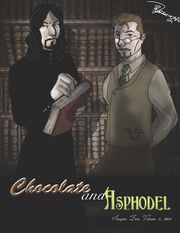 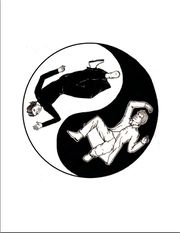 back cover of issue #2, "Two Dream" by Xterm

"To give the 'zine some context, I'll start with a brief history lesson. As difficult as it may be for some younger fans to believe, fandom didn't originate on the internet, and fans have been writing fanfiction, drawing fan art, attending conventions, writing/drawing/editing fanzines, and squeeing over their pet obsessions for decades.

In the olden days, back when dinosaurs roamed the earth and there were no personal computers, fans had to communicate via snail mail, and 'zines were mimeographed (some of you are, like me, probably old enough to remember huffing that purple ink as soon as we were given a handout in school), and later, they were photocopied. They were distributed via snail mail or sold in the Dealer's Room at conventions.

As a side note, if you've never been to a convention, watch Galaxy Quest. To paraphrase Homer Simpson, it's funny because it's true. Personally, I love 'em, but they can be intense and exhausting.

The first 'zines I ever bought were for ElfQuest back in the 1980s, and later, I both bought and contributed to Star Trek 'zines in the early 1990s. There's nothing quite like holding a 'zine in your hand, flipping through to look at the art, and then going back to read the stories, poems, and filks at a more leisurely pace. It's a totally different experience from reading fanfiction online, and 'zines are also designed with the printed page in mind, which gives them a different aesthetic.

And that brings us to Chocolate & Asphodel. If you were around when "the zine project" was in progress on the comm, then you may remember it was originally intended to be printed out, bound, and sold (not for profit) prior to the release of DH, but for various reasons, it was delayed, and it was released in November, 2007, as a free downloadable pdf instead.

The good side of that is that the 'zine was available to people who might not otherwise have been able to afford it or might have had to deal with overseas shipping costs."[6]