LZL Slash Factory was a personal X-Files slash fanfiction site. It hosted the stories of Loren Q, Louise Wu and Zoe Takashi. Louise Wu was the webmaster of the site.

It featured the Exigency series by Zoe Takashi and Louise Wu and other stories. Several of them won awards. 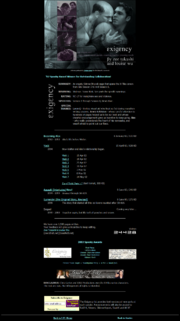 Baser Desires by Loren Q, September 2001 (36 KB). Mulder/Krycek - NC 17. Warnings: Dark and violent. Mulder fights the truth about himself and his connection to Krycek. The story was a Lisa e Krysa finalist.

All of It by Loren Q, May 2001 (8 KB).No pairing - PG. Warnings: Contains the actual dialog from that scene. Loren's version of what really happened in the Existence garage scene.

It Has to Be You by Zoe Takashi, May 2001 (7 KB). Mulder/Krycek - NC 17. Warnings: Very dark, violence, character death. Proceed at your own risk. Mulder and Krycek's relationship comes to its inevitable end. The story was a 2001 Lisa e Krysa winner in the "Short Story" category.

Syncretistic by Loren Q, Apr 2001 (80 KB). Mulder/Krycek - NC 17. Warnings: None. Magic and mischief as Mulder and Krycek work an X-File together. The story was a Lisa e Krysa finalist.

Xanthe - Queen of Skinner-fic. A great storyteller… stories of all kinds.

Down in the Basement - All X-Files, all the time. Has links to the old Archive-X and MKRA sites.