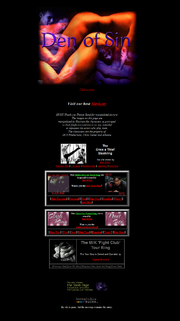 Den of Sin is the website for fanfiction by Nicole S., Aries and Orithain. The Den of Sin banner is a manip by The Theban Band.

The hosted fanfic was mostly X-Files and Once a Thief slash but there was also slash fanfic for Andromeda, Buffy the Vampire Slayer/Angel, Crusade, DaVinci's Inquest, Due South, Earth Angels, XTRO II/Aliens, Gladiator, Hard Core Logo, Highlander/Sliders, Homicide: Life on the Street, OZ, Star Trek: Voyager, Star Wars: The Phantom Menace, Harry Potter, Hockey RPS, Horatio Hornblower, Popslash, Queer As Folk (US), Rent, X-Men and a few other fandoms. In addition to a fanfic listing the page had a links section and a page with useful zine links and information about X-Files and Once a Thief zines.

The site was a member of The Once a Thief Slashring, the Mulder/Krycek Slash Ring, the Slash Fan Fiction Ring and The M/K 'Fight Club' Tour Ring.[1]

The last update was 1 August 2005. At that time the site was renamed The Den - Fanfiction by Nicole S. and got a new banner. The previously featured stories by Aries and Orithain as well as collaborations were still archived there. The last available Wayback capture is from 2009. As of 2011 the site only displays the message There's no more fic here.

The wonderful Nicole S. also hosts the works of Orithain and Aries on her site, and has some of the best in co-authored X-Files fic anywhere.[2]

Den of Sin - Doesn't this site have such a delicious name:) Fortunately for us, it also has really great fic. Force me to choose, and I'll pick Green Eyed Monster, by Aries, but all the stories are worth reading (and drooling over, etc ;) Be warned, however, most use the framework of the X Files only as the barest excuse to slash. Which is never a bad thing...;)[3]