You may be looking for the Star Trek: TNG story Earth Angel.

Earth Angels was an NBC presentation pilot that wasn't picked up as a series. The pilot was filmed in Toronto in 2001. It's a good-versus-evil story about warring angels on Earth and the concept is by Anne Rice.

The only reason why this is a fandom to begin with is that Nicholas Lea, the actor who played Krychek on The X-Files, had the role of Maximilian, the devil's son. (talk about typecasting! *g*)

Places where one can find Earth Angels fanfic are author sites of X-Files slash writers and archives that specialize in fiction with Nick Lea's characters like for example Focused on Nick Lea or The Nick Zone's Zone Zines.

Four parts of Anne Rice's story treatment for the series have been published in 1999 as a bonus in a comic book series called Anne Rice's Tales of the Body Thief.[1] 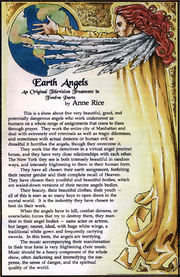