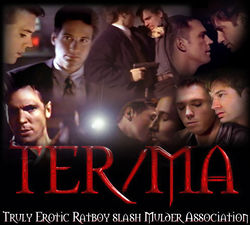 When the page changed hands from 'tite chatte and Endymion to The Theban Band, the website moved as well. The word Terma was still part of the URL but the archive got a new layout, a new name (RatB), and Once a Thief fanfiction and Skinner/Krycek slash got their own index pages.

In July 2003 the archive was split up in several more specialized archives.[2] RatB became the main Mulder/Krycek archive (including crossovers and Krycek/Other), WArm thoughts the main Skinner/Krycek archive, The Agency the main Once a Thief archive and TER/MA once again became the author archive but was no longer updated and was later preserved by alice ttlg.

In January 2018 it was announced that TER/MA would be moving to the Archive of Our Own as an Open Doors Project[3]. The import was completed in September 2020.

In the early years there were themed monthly challenges that were not so different from fanfic challenges today. Rentboys, handcuffs, malfunctioning sex toys, crossdressing, badfic, Mary Sues, personal ads or AU premises like 1001 Alexian Nights - if it was a popular trope or just seemed like a good idea, it became a challenge. Often the challenges were accompanied by Theban Band manips as a source of inspiration and sometimes the challenge was to write something based on a particular manip. 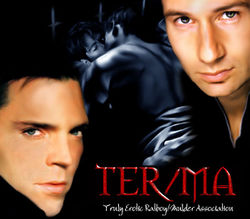 However, one particular challenge, The Understanding Slash Challenge, was very different because of its meta nature. In May 1999 Rowanne issued the following challenge:

This challenge is brought about by three different influences. First, a recent discussion with an author brought up the fact that people have very differing views on what slash is and how it is viewed. Second, I was very impressed with a recent member's story of how she became interested in slash. Lastly, I have a minor in anthropology and a natural curiosity about cultural phenomena, which I think the slash genre is.

That said, this month's challenge is to write a description of what your personal relationship with slashfic is. This can include whatever you feel appropriate—your history with it, what you think the definition of slash is, how you think the public views slash, how you think various actors/actresses view slash, how open you are about being a slash fan with others, including your friends, coworker, family etc... You might also include information about your demographic background like education, nationality, sexuality, employment, age, and experiences.[4]

39 people responded and the archived responses give a valuable insight into what people thought about the genre at that point in time.

How other sites describe it