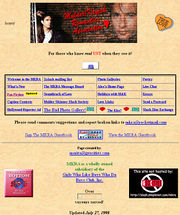 The Mulder/Krycek Romantics Association (MKRA) was the number one place for M/K fic in the early days of the fandom. It was the predecessor of TER/MA and RatB.

The motto of the Mulder/Krycek Romantics Association was: For those who know real UST when they see it! It was a comment on the often talked about Mulder/Scully UST and referred in this context to all the angry tension between Mulder and Krycek that was perceived as sexual.

The MKRA had a link to the X-Slash mailing list, featured a soundtrack of love, a few essays, caption contests, photo galleries, links, a slash zine exchange, a page for the M/K kiss from season 5, and of course M/K slash fanfiction!

MKRA was a wholly owned subsidiary of the Girls Who Like Boys Who Do Boys Club, Inc., which also owned the Mulder/Skinner Slash Society, the Due South Romance Association, and The X-Files Fanfic Hall of Shame [1].

It was the sponsor of X-Files Eggbeater Challenge.

So go back in time to an era when classic authors like torch, A. Leigh-Anne Childe, JiM, and DBKate were still writing XF. See Woodinat's insane and very funny "Deny Everything--Especially Pendrell's Death." Find out why this story and so many others in that time period had eggbeaters in them. Visit an era in which I read Mulder/Skinner (though I couldn't write it). Me, I'm glad it's all still there.... [2]