Mulder/Skinner and Mulder/Krycek had their own page, all other Mulder m/m fics were archived under Mulder/Other.

Separate pages existed for the threesomes

The site was a member of the Slash Fan Fiction Ring and the Mulder's Sanctuary webring and had several mailing lists: 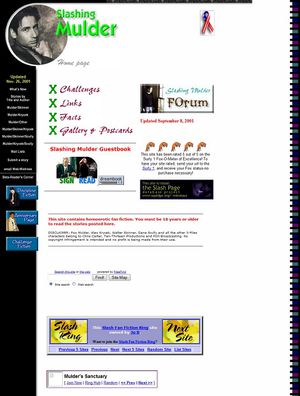 The link section of the archive was last update August 19, 2001, and included links to:

You want Mulder slash, you got it. Fairly simple to use site with lots to read. The only sad thing is the standalone stories are no longer being updated. Always worth a visit though.[1]