Electronic Male is a gen Data/Brent Spiner newsletter with at least thirteen issues.

A fan in 1993 wrote: " A periodic updating of "Spinerisms" (which in itself is a must for Data/Brent fans!) by witty commentator Joyce McDonald. Contains con reports, info about the TNG cast, letters of comment, book and fanzine reviews, and even news about Data fans. Especially noteworthy for excellent tape-sharing operation for those wishing to view all of Brent's performances caught on tape.[1]

Despite the possibility of the newsletter's title having something to do with the then-newfangled thing called "email," the title does not (at least according to a comment in issue #11) seem to be a pun on this new technology.

One Zine Leads to Another

From Joyce McDonald in the first issue:

Six months ago, I started work on a publication which was to be both my debut and my swan song in the area of authorship. Having satisfied my urge to write and publish at least one work, I planned to disappear back into the world of computers and programming with scarcely a look back.

One factor, however, that I did not anticipate was the tremendous response Spinerisms would receive even before it was submitted to our publisher. Because of the attention we have received from all over the world, I have come to the conclusion that we are filling a void with our network and that members are hungry for an organ that will express and respond to their interests and concerns. We have designed our Electronic Male newsletter for that purpose. If Electronic Male is to survive, it must, above all, be a forum. Your interests, your news, your opinions will make up the content of ail future issues of Electronic Male. The fact that I have written most of the articles and offerings in the first issue does not mean that I want this newsletter to serve as a personal ego trip. My primary intention is to spark your imagination and demonstrate the format and focus that we wish to take.

Here, then, is Electronic Male. Send us your opinions, reviews, artwork, and news. We do not at this point take fiction, but might be able to help you find a publisher through our network connections. Above all, LET US HEAR FROM YOU!!!

A number of the newsletters record the unhappiness of fans regarding Brent Spiner's no-shows at cons and perhaps less-than-diplomatic comments regarding fans.

Issue #7 is one example: it includes a photos of Spiner and the caption: "Can you believe it?!! It's really HIM... doing a convention!" That issue includes: "BRENT'S CONVENTION SCHEDULE!!! Save your pennies, folks, because here he comes!! Brent is doing SEVEN (count'em) conventions through September 1992, so just about all of you Brent-hungry folks can drink your fill. He's doing this to promote his album, SOOOO BUY SOME MORE!!!" [2]

Electronic Male News 1 was published in January 1990 and contains 7 pages. 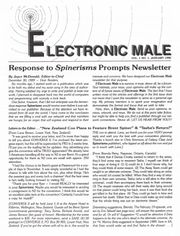 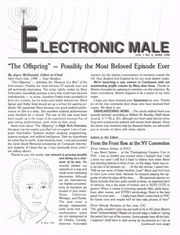 inside page from issue#2

Electronic Male News 3 was published in August 1990 and contains 8 pages. 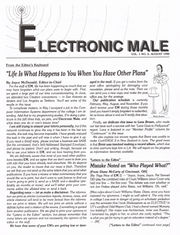 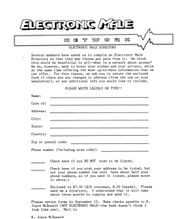 application for the Electronic Male Network

Electronic Male News 4 was published in December 1990 and contains 14 pages. 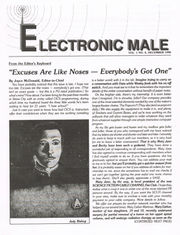 Electronic Male News 5 was published in February 1991 and contains 16 pages. 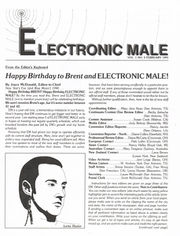 ELECTRONIC MALE usually does not address itself to rumors, but since we have heard this rumor more than once, and since the reported action could affect us directly, we feel compelled to mention it: Paramount may be cracking down on unofficial Star Trek organizations. In the event that this is true, and EM is asked to discontinue its activities, we must have a contingency plan. We would like your input. We have several possible courses of action:

First, dissolve the organization completely, and in the unlikely event that funds are left in the EM account — donate them to charity. : Second, dissolve and attempt to refund any remaining subscription money (a massive headache!).
Third, remain in contact and divert our attention to another topic such as: a) a popular and educational view of artificial intelligence, or b) another cult favorite TV show.
Fourth, make the ANDROID OWNER'S MANUAL our swan song,

If you'd like to make some suggestions, please write us. Again, this may be just a rumor, but in any event, any good business should have a dissolution clause, since one cannot effectively predict the future.

Electronic Male News 6 was published in July 1991 and contains 16 pages. 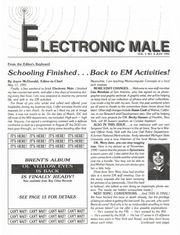 Electronic Male News 7 was published in November 1991 and contains 24 pages. 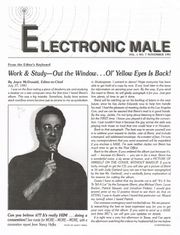 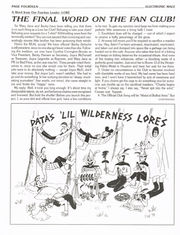 inside page from issue #7, a fan club parody

Electronic Male News 8/9 was published in October 1992 and contains 37 pages. It has illos by Fran Wong, Charlotte Graham Clarke. 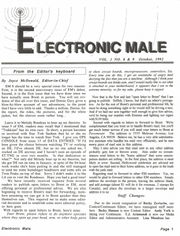 Electronic Male News 10 was published in August 1993 and contains 12 pages. 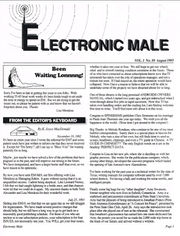 Electronic Male News 11 was published in February 1994 and contains 14 pages. 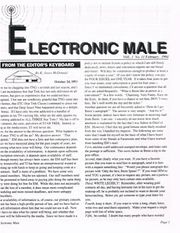 Electronic Male News 12 was published in May 1994 and contains 17 pages. 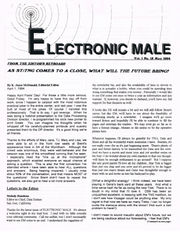 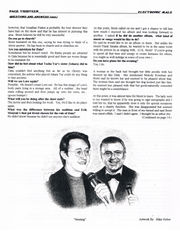 Electronic Male News 13 was published in February 1995 and contains 12 pages. 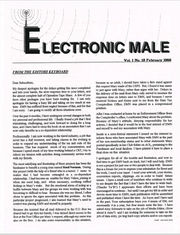