Accidental Baby Acquisition is a trope found in a number of both canon works and fanworks. In the most common version, the fanwork's main pairing accidentally acquires a baby and they have to take care of the child together. Occasionally, an ensemble cast will be stuck taking care of a baby; a pairing may or may not arise out of that. Or a single character will wind up caring for a group of de-aged teammates; again, pairing is optional.

This trope is usually used to bring together a pairing through the joint care of the baby or child that they have found themselves in possession of, although sometimes, the story is more focused on the situation that resulted in them winding up with a child. While the child is usually found by one or both of the pairing involved, sometimes the child is given to them to tend by a friend or family member; in some cases, the baby is a friend or teammate who has been de-aged.

Depending on the situation, accidental baby acquisition can be short-term or long-term, leading to kidfic. Long-term fanworks usually involve an orphaned child that the pairing adopts. While the title of the trope says "baby," this can include fics with older children; the key aspect is whether the fic focuses on the accidental origin of childcare and unexpected parenting requirements.

Garnet and Amethyst with baby Steven 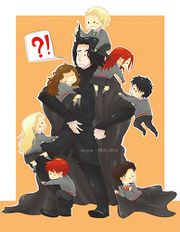