Flint/Wood or Marcus/Oliver is a Harry Potter pairing involving Marcus Flint and Oliver Wood, the Slytherin and Gryffindor Quidditch captains in the first three books.

Marcus Flint and Oliver Wood are rival Hogwarts Quidditch captains—of Slytherin and Gryffindor respectively—from Philosopher's Stone through Prisoner of Azkaban. Originally, Flint is described as a year ahead of Wood at Hogwarts. His appearance in Prisoner of Azkaban after he should have left school (an acknowledged mistake or "flint") was explained by J.K. Rowling as his having failed his exams and repeated a year. However, revised editions of the books place Flint in the same year as Oliver. While the original canon of Flint being older is more prevalent, both versions are widespread and tend to be accepted. In either scenario, the two likely shared classes at least in the Prisoner of Azkaban school year.

The two have a hostile relationship. For example, when instructed to shake hands before a Quidditch game, they each appear to be "trying to break the other's fingers."[1] Flint repeatedly attempts to undermine the Gryffindor Quidditch team's chances with unfair tactics (in-game fouls, interfering with their practice time, rescheduling games on false pretence, trying to sabotage Harry by dressing up as a Dementor), which angers Wood. Indeed, their very names suggest that the characters were designed with this antagonism in mind and as complements of one another: flint and wood makes fire, something that represents a heated rivalry but can also be interpreted by slashers as romantic or sexual passion.

Interest in the pairing emerged in early 2001, when the cast of the first Harry Potter film started to be announced and fans were intrigued by photos of Sean Biggerstaff (Oliver Wood) and Will Theakston—who would actually appear in the film as Terence Higgs but was initially reported to be playing Flint. Khirsah's November 2001 "Violence Fetish", the first Flint/Wood fanfic posted to hpslash, was a direct response to Jamie Yeates's somewhat unexpected depiction of Flint in the first film.[2]

Flint/Wood fanfiction gained popularity in 2002. Mireille was one prolific early writer for the pairing, writing over 10 Flint/Wood stories by August 2002. Other early authors for the pairing include digikym (Thrasia), V, and Silvia Kundera.

The LiveJournal community roughquidditch was founded in January 2003 and was active through 2012. Another LJ community, marcus_oliver, was active in 2006 but has since been deleted.[3] Two popular LiveJournal RPGs were also influential in popularizing the ship: Hogwarts After Dark (lumosnox) (2002–2004) and The Leaky (2004–2006). 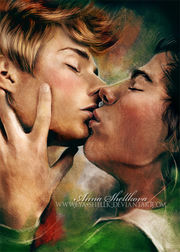 Flint/Wood fanart by Anna Shellkova. A unique realistic depiction of Flint and Wood kissing. The red and green of their clothing suggests their Hogwarts Quidditch uniforms, and their windblown hair gives the impression that they are flying.

Many Flint/Wood fanworks are set during canon in the first three books, Marcus's and Oliver's final years at Hogwarts. Works usually focus on their canonical Quidditch rivalry: Oliver is canonically obsessed with Quidditch and, in fanfiction, this often carries over to an obsession with Marcus. There are also Quidditch-focused works set after they leave Hogwarts: Oliver canonically goes on to play Quidditch professionally with Puddlemere United, and Marcus is also often depicted as going pro after Hogwarts—usually with the Falmouth Falcons, due to their reputation for a violent playing style matching what we see of Flint's proclivity for fouls in canon.

Some Flint/Wood fiction touches on the war against Voldemort. Canon does not indicate whether the Flint family has connections with Death Eaters, although this is common fanon due to Marcus being a Slytherin and (per Pottermore) a pure-blood. On some occasions (such as Mireille's The Last Time, July 2002), Marcus is depicted becoming a Death Eater himself, resulting in conflict or a doomed relationship with Oliver. More commonly, Marcus is caught between Oliver and his own friends and family in the war.

Fluff and schmoop are relatively uncommon in Flint/Wood fanworks.[4] Many early stories, in particular, have elements of darkfic and angst, and even get-together fics tend to emphasize physical attraction over romance. Some fans suggest that this is because Flint/Wood is "jockslash" and tension and PWP are more true to the characters. Drew writes in his 2004 Oliver Wood character essay:

In the grand tradition of Mortal Enemies Having Sex, however, many authors stick these two in a broomshed/locker room/closet/etc. and watch the hot and heavy happen. If we're going to approach this pairing, it's important to recognize that these are not two characters who are going to wax philosophical or poetic about the other's beauty -- these are two teenagers (or 20somethings or however old you make them) who are, bluntly speaking, jocks. Jocks who, in all likelihood, are ready to jump just about anything that moves -- remember, in the books they're teenagers, and the hormone overload is probably running fast and furious in these two. If an author forgets that, that is, turns one of them into a lofty academic or pouting fop, then you're not really reading Marcus/Oliver slash -- you're reading original character fiction written in the Harry Potter universe.-- Drew (babyofthegroup) at idol_reflection, Which broomstick?, Nov 2004[5]