Space City was launched just before Labor Day weekend. One year later, we decided to throw ourselves an on-line 'party' in honour of our birthday, and that tradition has continued each year, despite the change in the list name. (For non-American list members, "Labor Day" is a floating holiday observed on the first Monday in September, resulting in a three-day weekend.)

To help inspire the writers, we usually come up with a theme for the party, something general enough to be adaptable to any season or any group of the crew that a member might prefer to write about. For example, two past themes have been "love" and "hidden aspects". Members start making suggestions for the theme early in June, and then the List Admins put up a slate of the suggestions and the membership votes.

Note: you aren't required to use the theme by any means. It's there to help people think up stories, but if some other idea seizes your imagination, we're equally happy to read that instead.

Also: Some people choose to contribute through graphics/art. These should be put on to a web page, and a message giving the URL posted to FC.[1]

The parties were most active in the 1990s and early 2000s but at least one piece was published onlist every year until 2014. Kalypso recalls that for the early parties, the list owner originated the theme and often wrote an opening paragraph for others to continue. Subsequently themes were suggested and voted on by list members, as described in the FAQ, but for the later parties, there was often only a single suggested theme.[2]

Longer works from the parties were often re-published in printzines. According to the editor, one of the purposes of Tales from Space City was a way to get a lot of themed stories from the annual Labor Day Party collected in one place.[3] 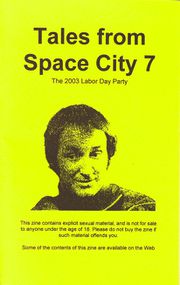 2003 party stories were collected in this issue

The theme was 'Smut Hotel - the characters book in, security guards watch the CCTV footage in amazement.' Stories include:

The theme was 'Dreams of Love - an alien invades the characters' dreams, demanding to know about love.' Many stories were collected together in the first Tales from Space City. Editor Helen Patrick commented: Given the smutty little minds to be found on Space City, you'd expect huge volumes of erotica. You'd be wrong <grin>. We had a wondrous variety of expressions of love, and the statistics compiled by one kind soul make interesting reading.[4] According to Susan Cutter's stats, there were 24 gen stories, 14 het, 8 slash, 2 multiple/orgy & 4 other. The most common pairings were Avon/Servalan 5, Avon/Blake 4, Avon/Cally 3 & Avon/Anna 3. Avon was by far the most popular character, especially in slash, featuring in 21 pairings, followed by Blake (7), Tarrant (7), Servalan (6) & Cally (5); surprisingly, no stories featured Vila in a pairing. Unusual pairings included Dayna/topiary bear, Jenna/Chewbacca & Tarrant/Link.[5]

The theme was 'Hidden Facets - an old woman urges the characters to look into a mysterious mirror.' Susan Cutter explains how the theme was chosen: I've been mulling over some of the suggested themes – and I think that three of them (7 deadly sins, misused characters, missing scenes) could be combined rather neatly under the title of "Hidden Facets," with the question of whether the "facet" is a trait/activity that a character wants to keep hidden OR one that just was never properly showcased in the series OR those scenes that didn't make it to the screen (and past the censor? she murmurs hopefully) left up to the writer.[6] Many stories were collected together in Tales from Space City 2:

The theme was 'Something New - for the first year on Freedom City.' Stories included:

The theme was the 'Seven Deadly Virtues - any or all of them.' There was no themed edition of Tales from Space City, but some stories later appeared in other fanzines or online, including:

The theme was 'Come As You Are'. Stories included:

The theme was 'On Board - scenes on a ship.' Stories include:

The theme was 'It Seemed Like A Good Idea At The Time - but it never turned out as they expected!' Some of the stories were collected as the seventh issue of Tales from Space City:

The themes were 'Shore Leave/Teleport Duty - a tie, and they seemed to tie in.' Some of the stories were published in Tales from Space City 9.

Another tied vote resulted in the themes 'Minions/Minor Characters' & 'Room 101'.

The theme was 'What If? - make one change to an episode & see what happens.'

The theme was 'Clones, Androids and Robots.'

The theme was 'Communications.'

No formal theme, but a member suggested 'Orac has found and has been reading the Prism (tm) logs. Which characters, I wonder, have been visiting the most interesting websites and emailing or chatting to the most unexpected correspondents (not necessarily under their real identities...)'