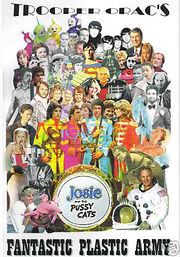 "... I love the cover! And the back cover magazine, which boasts Tyce Sarkoff as its cover girl and (supposedly) an article entitled 'Ten good reasons to inform on a friend'. There are quite a few adverts/photo montages (this is the noughties after all, people) throughout the zine as well, which I like and which fit with the pop culture theme of the covers. Nicely and simply laid out again - god bless the word processor." [1]

Trooper Orac's Fantastic Plastic Army is a Blake's 7 fanzine, edited by Neil Faulkner and produced by Judith Proctor. Published in 2001, it runs to 134 pages and contains predominantly gen material, with one slash story. This zine is sometimes referred to as "tofpa."

Having finally found the courage to announce that I would not be doing another zine, I promptly got my arm twisted into... doing another zine. The first submissions arrived within days, and they were so good I could hardly back out. For a long while I provisionally called the zine Eric, not for want of a better name, but because I wasn't sure I could pull off my rather ambitious plans for a cover. These plans were first hatched in 1997, with B7's 20th anniversary looming. Had this idea of launching the latest issue of AltaZine in January 1998 with the catchy subtitle It was twenty years ago today... Does this remind you of a certain song? It did me. Unfortunately I didn't have a PC then, so my graphics potential wasn't up to much. Never mind, better late than never. [2]

'Trooper Orac's Fantastic Plastic Army' is rather different from Mr Faulkner's previous anthology zines. For a start, at 134 pages -- with ten meaty stories plus assorted shorts and cartoons -- it's exactly the size of 'Stadler Link' and 'Pressure Point' combined (can this be a coincidence?). For seconds, the production values have leaped: gone forever the black-and-white, ink-jet printed, side-stapled, coffee-stained covers in favour of an all-singing, all-dancing (all too literally) colour photomontage. 'tofpa' also contains a more equitable distribution of B7 characters than either of the previous zines, as well as a much higher concentration of serious pieces. And finally, the zine includes several stories with 'adult' content, and thus must probably be considered a 'mixed' zine.

The typesetting is unpretentious, clean and readable. In general, the proofing is of a reasonable quality, though someone should probably inform Mr Faulkner of the difference between 'discrete' and 'discreet' (we all have our blind spots...). 'tofpa' might be considered an art-lite zine -- apart from the covers, there are only three small illos by Andrew Williams (including an excellent seedy Justin on p118) plus a single full-page Cally by me. The deficit is supplied by occasional photomontages and an amusing couple of cartoons masquerading as Aunty Anna's Casebook.

'tofpa' contains three long pieces and, while two illustrate different archetypes of the 'Blake's 7' fanfic genre, Ika's 'With/out Blake' is an original. In a style somewhat reminiscent of Neil Faulkner's own 'Kriegspielen', 'With/out Blake' creates the supremely believable Space Commander Siv Holland and her post-Galactic war world. With excellent characterisation of the third season crew, plus cameos from various well-known figures, the saga moves effortlessly from an outer-world refugee camp to Space Command HQ to an interrogation unit and finally to the _Liberator_, taking in asides into revolutionary and sexual politics, not to mention a bit of fanfic cliché bashing along the way.

On the other hand, Marian de Haan's rollicking ensemble adventure 'A Clever Plan' makes ingenious use of a familiar format, with a mission that just *keeps on* going awry. Great characterisation and deft humour in this light-hearted story where almost everybody wins.

Morrigan's 'Physics 101' is an illustration of Newton's third law -- the Action being Blake's destruction of the shadow farm on Zondar, the Reaction being the Terra Nostra's response -- in the form of a hurt/comfort story. Though the idea is novel and intelligently handled, I hope the author will forgive me if I say that I felt nearly 30 pages might be a little too long for the exposition.

Morrigan also contributes two medium-length pieces. Quite simply, 'The One Shot' is the most moving PGP I've ever read, and I'm delighted that it's found a home here. 'The Second' is primarily an Avon--Blake character piece, written to illustrate the Freedom City 'Seven Deadly Virtues' theme. Set in a skilfully evoked primitive culture, it's the little details that make this piece so entrancing: Avon tearing his hanky in half, little boys scuttling after pistol shot for melting down and recasting, the collaborative ruse to persuade Blake to wear body armour...

'tofpa' appears to be a particularly masculine zine: not only a male editor, but no fewer than *three* male contributors! The editor's warning 'Escaping from imprisonment by pretending to be violently sick, or crawling through conveniently large ventilation ducts, does not normally win me over' seems to have inspired Tom Forsyth's story 'Escape', which gives a reasonably realistic view (with one obvious initial caveat) of the options open to a particularly ingenuous prisoner in a Federation base. There are some interesting thoughts on mutoid technology along the way, as well as a few cute jokes. I found the characterisation a touch bland, but you can't have it all. Readers of a delicate stomach might appreciate a four sick-bag 'ick' warning for Andrew Williams' 'Animal Nature' -- a well-written attempt to make something interesting and biologically plausible out of the similarly named episode. (For those of us who can count to three, Steve Rogerson also contributed to the shorts.)

Another justly reviled episode is the focus of 'Twilight', by Ellynne Grant. (I won't reveal which for spoiler reasons.) While nicely written with a lovely dreamlike feel, I felt that this was a somewhat less successful rehabilitation job: Avon as a repressed telepath has become a bit of a cliché and the plot developments felt to me to have been rather shoe-horned into the author's ideas.

And finally there are my two contributions, both prequels. 'A Short Ride in a Fast Machine' was conceived cinematically with accompanying music for each section, and speaks to the difficulties of connecting with others in a city environment. It's a five PoV piece which was great fun to write; the reader can decide how successful it is. 'What Might Have Been' examines the life of a revolutionary in the sterile environment of the Earth domes. The story brings together Blake and Avon in an environment without guns, bombs or pursuit ships, only to find that problems with trust as well as their differing political ideologies still lead inevitably to tragedy. For what it's worth, I personally consider this to be my best story yet using the B7 characters.

Among the shorts, the Executrixian 'Begin As You Mean To Go On' stood out for me as an examplar of the great effect a skilful author can achieve with just a few hundred well-chosen words.

Interestingly, Mr Faulkner does not appear to deign to put his name on this zine, though interested parties might spy his face hiding near the back on the cover. He does, however, contend in his editorial that this is the best collection of B7 fan fiction he has ever amassed. Given the quality of its antecedents, this is rather a forceful claim: 'Stadler Link' and 'Pressure Point' each contain unforgettable, stand-out pieces of fiction -- I'm referring, of course, to Alison Page's 'The Young Ladies Home Companion' and Nickey Barnard's 'Haunted' -- which make one look differently at the series afterwards. I don't see in 'tofpa' any such stand-out piece; in my opinion, the strength of the new zine lies in the uniformly high quality of *all* the contributions, as well as the exceptionally varied nature of the contents.

In this light, I find it interesting to compare 'tofpa' with two other recently published anthology zines with predominantly gen content, Judith Proctor's 'Star Four' (Autumn 2000) and my own 'ttba' (February 2001). (All three zines are available via Judith.) Unsurprisingly, the three zines overlap substantially in their contributor base (of 26 authors, 11 appeared in two or more), yet the differing tastes of the editors have made for rather different flavours.

Making generalisations is bound to reflect a degree of observer bias. With that caveat, I'd say 'Star Four' focuses on character and character interactions, with a strong bias towards ensemble pieces (50--60%); stylistically, it generally sticks to the more traditional end of the spectrum. In 'ttba' I set out with the aim of accumulating a range of writing styles and structures, and was lucky enough to receive tribs that reflected my interests. My bias as a reader is towards small intimate character pieces, and that's again reflected in the contents (only 30% ensemble). I'd say that 'tofpa' is more similar to 'ttba', in that it encompasses a wide range of writing styles and treatments, and tends to focus on the individual/small group, rather than large ensemble pieces (again around 30%). In terms of looks, 'tofpa' has a much more straightforward typesetting style than 'ttba', and is much less heavily illustrated than either 'Star Four' or 'ttba'.

In conclusion, I'd say that 'Trooper Orac's Fantastic Plastic Army' is an excellent zine, well worth its asking price, whose contents are sufficiently wide ranging to please anyone but the most ardent slash fan. The high quality of the fiction included in 'tofpa', 'Star Four' and 'ttba' (if I might be so immodest), as well as 'Stadler Link' and 'Pressure Point', is a tribute to the B7 fans who continue to write it. Personally, I'd have been sad to have missed out on *any* of these zines.[3]