needs a summary, some basics

Karl May (1842-1912) was one of the most popular German authors ever.[9] He sold more than 200 million copies world wide and mostly wrote about the adventures of his first person narrator in the American Old West and the Middle East. Said narrator - Old Shatterhand (Charley) in the Wild West, Kara Ben Nemsi (meaning "Karl, son of Germany") in the Middle East - shares many characteristics with a typical Mary Sue and sometimes May even claimed to be his own main character and presented the events described in his books as his own experiences. He is best known for his Winnetou novels which are about the epic friendship between Old Shatterhand and the Apache Winnetou. The two men start out as enemies, turn into the best of friends and become blood brothers, although by today's standards their relationship seems much more romantic than brotherly. For example, this is Charley thinking about Winnetou's lips: "The gentle, lovingly mild and yet so energetic bow of his lips was always visible, those half-full, I want to say kissable lips"...[10]

When May published his first Winnetou novel in 1892, that kind of escapist literature was already very popular[11] and he successfully recombined familiar elements and stereotypes in his armchair travel accounts. The result was a character that for generations of Germans influenced the idea of what Native Americans are like.[12] 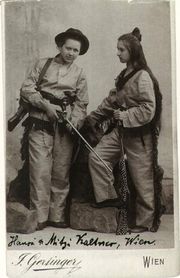 Thanks to May we know what fandom looked like in the late nineteenth/early twentieth century. In an open letter[13] he apologized for not always immediately answering his fan mail and asked his fans to send him pictures of themselves because he wanted to create a photo album of his readers. He wanted pictures and pictures he got. The Karl May Leseralbum[14] consist of 494 photos and they show a fandom that was mostly young, often male, but with a much stronger female presence than one would otherwise expect. They also show some impressive examples of cosplay, for example Hansi and Mitzi K. dressed up as Old Shatterhand and Winnetou, complete with Winnetous famous Silberbüchse (his rifle) and Winnetou's hair style from the books.[15]

Dressing up as characters from the Karl May novels has a long tradition and so does reenacting the stories in open air festivals called Karl May Festspiele. The first of these festivals was in 1938 and there are still several festivals each year.[16]

In the 1960s a series of Karl May movies reintroduced the characters to a modern audience. Winnetou was played by French actor Pierre Brice who became so strongly identified with this character that he had trouble finding other roles. Old Shatterhand (aka Kara Ben Nemsi) was portrayed by American actor Lex Barker. A 2001 parody of these movies was a huge success in Germany. It relied strongly on familiarity with the Winnetou movies, played with the homoerotic subtext of the source material, and was mostly one big fan film guised as a professional production.

Although there are several Karl May adaptations and sequels and the Karl-May-Gesellschaft e.V. is dedicated to the analysis of the original works, there is very little fanfiction that we know of. The Karl-May-Wiki quotes a letter from 1895 to one young reader who had asked May for permission to write a story with Winnetou and Old Shatterhand for a magazine. May allowed it but asked not to be killed by Indians because his readers knew that he was still alive.[17] There are rumors of the existence of a W/OS zine called In den Bärenfellen but even the essay[18] that mentions it says the author only heard about it. Most of what is available on the net is listed in the small Karl May Fanfiction Index. However, the influece of May's characters on German media fandom sometimes shows up in the context of other fandoms. One example is the SGA vid Stargate: Atlantis - Hadschi Halef Omar[19] which uses a 1980s song about Kara Ben Nemsi's trusted sidekick Hadschi Halef Omar Ben Hadschi Abul Abbas Ibn Hadschi Dawud al Gossarah (Yes, that is his full name!) from the Middle Eastern adventures to tell a humorous story about Rodney McKay. The song elevates Hadschi from sidekick to hero and the vid mirrors that by casting John Sheppard as Kara Ben Nemsi and turning Rodney into the main character just like so much fanfiction in the first few seasons did.

Perry Rhodan is a science fiction series published since 1961 in Germany. It's also the name of the main character. The series is a space opera that begins in 1971 with the first manned moon landing by U.S. Space Force Major Perry Rhodan and his crew, who discover a marooned extraterrestrial space ship from the planet Arkon. Appropriating the Arkonide technology, they proceed to unify Terra and carve out a place for humanity in the galaxy and the cosmos.

The first issue appeared in 1961 and more than 50 years and 2700 issues (as of May 2013) later the series is still ongoing with a new issue published every week. The stories are told in an arc structure (called “cycles”) and have dealt with every SF trope and topic under the sun, covered thousands of years (including time travel, parallel universes, etc.) and many galaxies, making the canon so complex that even the current generation of writers would be lost without reference sources such as the fan-run Perrypedia.

One of the series' creators was Walter Ernsting who co-founded the Science Fiction Club Deutschland in 1955. In the 1950s and 1960s, Science Fiction publications in Germany were dominated by English and American authors. German authors had trouble getting published (to get around that, Ernsting had to invent an American pseud and pretended his first novel was actually a German translation of an American original work). That changed when Perry Rhodan brought "the liberation for independent German Science Fiction" with a weekly magazine series that was written exclusively by German-speaking authors.[20] As such, the series captured a substantial fraction of the original German science fiction fandom and exerted influence on many German-speaking writers in the field.

The first known translation was a fan translation in 1965, when the first four issues were translated into Hebrew.[21]

An old report (YouTube link) by a mainstream news program is a good reminder of the prejudices SF fans in Germany faced on a regular basis.[22] The alarmist reporting seems ridiculous today, however, inadvertently the clip functions as a source that shows Perry Rhodan merchandise from wayback when, tells us what fans thought about the series, mentions that there where 600 Perry Rhodan fan clubs in 1969, offers insight into the creative process behind the scenes and one of the creators talks about the close connection between writers and readers.[22]

Fan activity mostly consists of discussing the canon and everything PR related, creating blueprints for space ships, building models, collecting merchandise, and meeting other fans at conventions. One fan film has been in the making for forty years and includes footage that was filmed 30 years ago.[23][24] It is about a story that started in issue #50, the first meeting between Perry Rhodan and Atlan, an Arkonide prince who has spent the last 10,000 years stranded on earth. They are both immortals (their relative immortality was a gift from an alien entity) and they start out as enemies but soon become best friends. The relationship between these characters has always been popular and it has even been compared to the friendship between Old Shatterhand and Winnetou.[25]