FanFiktion.de, short FF.de, is a German-language multifandom archive that was created in 2004. It is not a pure fanfiction archive; users can also upload their own novels, meta, poems and autobiographical texts.[1] Content requirements are minimal and mostly address legal concerns, such as the laws against pornography, the child protection laws, intellectual property rights and Volksverhetzung.[2] Other rules were introduced to provide minimal quality control. Chat style, a type of script format, was banned, as were so called "empty chapters" (chapters which aren't part of the story, but instead consist of begging for reviews or announcements that the next chapter won't be posted within the week), bad spelling and grammar and extensive linking within the story.[3] 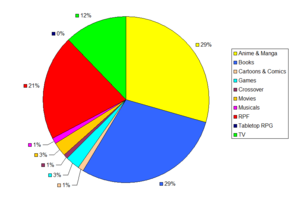 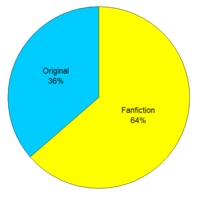 FF.de is popular among writers of fanfic for anime and manga fandoms, RPF, and book fandoms. Many authors also write original fiction and poetry, some do so exclusively. This sometimes leads to a clash of cultures within the archive, since some original fiction authors look down on those who write fanfic exclusively.[13]

The most popular book fandoms are Harry Potter, Twilight and The Lord of the Rings, with Harry Potter fanfiction making up about half of all book fanfic. All other book fandoms are small with less than 500 stories, often less than 100, written for them.[14] The biggest animanga fandoms are Digimon, InuYasha, Naruto (the biggest), One Piece and Yu-Gi-Oh!, but smaller fandoms, including Avatar, are not necessarily small.[15] Popular RPF fandoms are Football RPF, Tokio Hotel and J-Pop and J-Rock RPF and Finnish Bands.[16] All other fandoms are medium to small in size, with less than or just over 1000 fanfics.

4 years later the debate was still simmering when Helge, one of the administrators created a blog associated with the FanFiktion.de archive. The first post was published on 2008.01.01. and was titled Atti und die Zukunft der deutschen FF-Szene or (Atti and the Future of the German Fan Fiction Scene).[18] The post included a link to a photo of the FFP archivist, Atti. While the photo was not used with permission,[19] it had been publicly available prior to that point somewhere else on the net in connection with her name. Still, its use seemed superfluous to some and disingenous to many who felt that its purpose was to higlight the fact that the FFP archivist was an overweight woman. The archivist Helge disagrees with both assessments pointing out that he used the image because "it put a face to the name, nothing more. It would have been set too if Atti were the most beautiful person on the planet." [20] The blog would subsequently become a source of controversy as it repeated the history of disagreements over the nature of the two main German fan fiction archives, Fanfiction Paradies and FanFiktion.de: moderated vs open fiction postings, ad-supported vs ad-free, web design and color schemes etc.

The site archvist, Helge, has also referenced concerns involving writer Diana Gabaldon on the Talk page without offering further detail. He has discussed the author's position on fan fiction in his blog here and here (note: blog posts are in German). Both seem to elaborate on the archives decision to not permit any fan fiction based on her works even without receiving a cease and desist letter from the author.[22] Some members have questioned the decision to proactively ban fan fiction based on Diana Gabaldon's work, pointing out that while other writers have objected to fan fiction in general that this has not resulted in the archive banning fan fiction based on their works.[23] For example, Anne Rice's Vampire Chronicles still has its own category on FF.de in spite of the author's well known objections to fan fiction.[24]

The site has been forced to remove RPF about two German celebrities, violinist David Garrett [25] and the soccer player Andreas Görlitz [26] According to the archivist, the site received cease and desist letters from their representives on some unspecified date. Further details are unavailable at this time. A similar case repeated in 2012, when the agency SportsTotal approached the archive and forced them to ban a long list of several famous German footballers from their side, including popular fic protagonists like Marco Reus [27], Mario Götze [28], Benedikt Höwedes [29] and Toni Kroos [30]. In consequence, several authors were forced to delete or change their fics. Some authors stopped writing RPF altogether, others moved to communities on LiveJournal.

Finally, the site was the focus of a trademark dispute in 2010 (see The Lichtbändiger Case) below.

In March 2010, the archive was served with a cease and desist letter in connection with the claim that some of the Avatar fan fiction hosted on the archive infringed on a trademark.

Avatar: The Last Airbender has been translated into many languages. In Germany, it has been translated to mean: Avatar – Der Herr der Elemente. However, since 'Airbender' is only one of the superpowers demonstrated in the movie (ex the ability to bend the element of air is very much like the ability to bend water or fire elements), fans have created an additional superpower, Lightbender which means "Lichtbändiger" in German. A eyeglass manufacturer with a similar name, Lichtbändiger Brillendesign, felt that any use of the word 'Lichtbändiger' online constitued an infringement of their tradmarked name and ordered the archive to remove any fan fiction that referenced this fictional super-power.

That is to say, the company Lichtbändiger Brillenglasdesign registered the term "Lichtbändiger" as a trademark. Under this trademark, they sell a variety of glasses whose colourful decorations are their distinguishing characteristic. These glasses can look like this, this or this. The company Lichtbändiger Brillendesign asked FF.de to remove all stories that contain the term "Lichtbändiger". We contacted our lawyer, who advised us to comply with the request. While there is in fact no direct relation between the element benders from Avatar and the glasses, the trademark "Lichtbändiger" applies to electronic publications, which fanfics are in a sense, as well, and so the trademark law applies. [31]