This article documents a currently unfolding situation within the fannish realm. Content may change quickly, and the page structure itself may undergo major revision. New details are very welcome.

Destielgate is a name given to a series of events and occurrences in Supernatural fandom, beginning 5th November 2020 with the canonization of Destiel. This canonization was celebrated by some fans, but the unrequited love confession was controversial for other fans and led to renewed complaints of queerbaiting and homophobia. Destielgate extended past Supernatural's controversial final episode, with many fans referring to the event as Supernatural Season 16.

It marked a period of increased engagement by fans. Supernatural and Destiel trended regularly on social media and blogging platforms as fans shared updates, theories, memes and shitposts. There was a noticeable increase in the production of SPN and Destiel centric fanfiction and fanart.

On this date, Season 15 Episode 18 made Destiel canon, with Cas proclaiming his (unrequited) love for Dean. This development produced an explosion of fan reaction on sites like Tumblr and Twitter. On the second day of vote counting in the US presidential election, and with the result of that election still uncertain, Supernatural and Destiel began to trend on social media and blogging sites around the world.

Many shippers were unhappy with the canonization as the series killed off Castiel immediately after his love confession; Supernatural's problematic history of killing queer characters was referenced in many posts.[2] Many fans also questioned whether this could be considered a true 'canonization' of the ship at all, due to the fact that the scene consists of one character confessing unrequited love and then immediately dying. 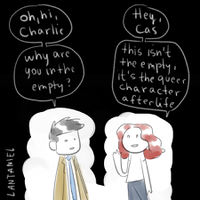 Fanart by Lantaniel on Tumblr joking that canonically queer characters like Charlie and Castiel are sent to the "queer character afterlife".

There was discourse and debate about the narrative, but there were also many memes that highlighted the Bury Your Gays trope by referencing gays going to superhell or turbohell. On November 5th and 6th, Destiel memes proliferated on Tumblr, often referencing current events and other SuperWhoLock fandoms. V for Vendetta was also referenced due to that fandom's connection to November the 5th.

[maximilian-desoto:]
this is the first time in years that tumblr has felt organic. No I will not elaborate

It should be noted that at this stage, many long time Supernatural fans did not believe Cas's death was final. Supernatural regularly kills main characters only to bring them back. So many fans were gleefully celebrating Cas's confession and awaiting a Destiel reunion in the final episodes.

The airing of, and subsequent reaction to, 15x18 happened at the same time as the spreading of a false rumour involving the resignation of Putin. Because of this, memes and jokes spread around sites such as Tumblr, implying that the two were linked and that Putin was resigning either because he was a Destiel shipper who disliked the confession scene's handling, or because of homophobia, in that he disliked Destiel becoming canon. Many people appeared to find out about Putin's (false) resignation through these memes, which then lead to more memes.

The response also took place during the period of time in which the results of the 2020 United States presidential election were still up in the air, specifically around the results for the state of Georgia. This also lead to memes both relating these two things to Destiel, as well as the general absurdity of that night. Some fans used the tag SuperPutinElection to share posts and memes related to these events.

Election related memes continued for a number of days, as the election count itself continued. This culminated in a press conference at Four Seasons (Total Landscaping), which in itself inspired many memes, and during which the election results were called. The Fours Seasons Total Landscaping AU arose from those memes and Supernatural was one of the first fandoms to employ that trope in fanfiction.

The excitement that accompanied many fans discovering Destiel was canon, alongside rumours that Putin was resigning, encouraged similar memes referencing other current events and fandom related news. This included:

During the mayhem, dashconstaff seemingly returned to Tumblr to announce that Dashcon was returning in March 2021. It took Tumblr users awhile to notice that this was a parody account. The donation link in the announcement post went to a non-profit organization unassociated with Dashcon or any other fannish event.[4]

just had to take a fucking second and close my eyes because i remembered that on the night of november 5th tumblr had convinced me, an outsider, that this was an actual gif of Castiel Supernatural being sent to mega fruit hell [5]

On November 25, fans discovered that a Latin American Spanish dub of the show included Dean reciprocating in response to Castiel's confession, saying "(Y) Yo a ti, Cas" ("(And) I you, Cas").[note 2] This led to widespread confusion, celebration, and speculation among fans about edited dialogue and cut scenes in the episode, with many fans believing that the dub must have been based on an earlier version of the script or scene, which was later changed. The hashtags #TheySilencedYou and #TheySilencedThem began trending on Twitter, with outraged fans demanding that Dean's canonical bisexual identity (and the reciprocation of his love for Castiel) be acknowledged and not suppressed.[6]

The Spanish dub was seen by some in SPN fandom as evidence of a conspiracy theory which was already gaining traction in fandom. This is a fan theory which asserts that the writers intended to make Destiel a fully canonical and requited pairing, but this decision was overturned with last minute script rewrites and cut scenes.[7] This conspiracy theory is often referred to as Destielgate, and much fannish activity has been focused on finding evidence that Desitel was supposed to be endgame.

Fans also made a number of jokes and memes about the fact that Destiel was "only canon in Spanish", with the Tumblr is-destiel-canon-yet posting:

Is Destiel Canon Yet?

Later that day, Misha Collins addressed the commentary on the Spanish dub, saying a "rogue translator" added their own incorrect dialogue, and that there was "no conspiracy within the network, staff, or cast of #SPN to minimize or erase representation from the narrative".[9] This led to more confusion and frustration from many fans who felt as though Collins was minimising the extent to which Castiel's immediate death after confessing to Dean played into the Bury Your Gays trope, regardless of whether the Spanish dub was or wasn't official.[10][11] Fans also expressed their scepticism that a professional dubber would be allowed to "go rogue" on the translation and have it aired with no-one objecting or noticing the discrepancy.[12] Others, however, pointed out that "rogue" translators changing dialogue on their own was possible and has happened in the foreign dubbing of other American television shows.[13][14] German fans of The Simpsons even created a website to document such instances in the German dubbing of their show.

Once again, many memes and jokes have been created in reference to the Spanish dub, both for the Supernatural fandom and for others.

Rumors of other foreign dubs also having Dean reciprocate Castiel's confession soon surfaced. The most prominent of these was a recording of what was supposedly leaked footage of the Italian dub. The footage was later revealed to be fake and its creator explained in a Tumblr post why and how they created it.[15] The hoax occurred in November 2020, but the eventual release of the Italian dub in September 2021 also caused an upset in fandom. The Italian dub ultimately un-canonized Destiel by using the platonic version of "I love you" rather than the romantic in Cas's confession. Reaction was swift from fandom and actor Misha Collins, with the translation accused of homophobia in Italian media.[16]

General opinion of the finale appears to be have been mixed, with the majority of SPN fandom underwhelmed or disappointed. Regarding Destiel, the episode was criticised for Castiel having seemingly been forgotten about. Memes about how the car went to heaven, yet Castiel went to superhell arose.

Fans were also critical of the narrative choices made in the finale - namely Dean dying on a hunt and Sam giving up hunting to live a suburban life. Many fans pointed out that ending negated all their experiences and character growth in the 15 seasons of SPN, as both brothers would have made the same choices and suffered similar fates if Dean had not sought out his brother's help in season 1 episode 1. There was also criticism for the manner in which Dean died, and memes that he died of tetanus subsequently arose.

Fans were also critical of production in the finale episode. Old Sam's wig, and the vampires in clown masks were two points often ridiculed. There was an acknowledgement within fandom that the interruption to production caused by Covid-19 would have to result in changes to ensure all actors and staff were safe on set, but that didn't prevent fans from been disappointed by unresolved storylines and baffling narrative choices.

Fannish events taking place in SPN fandom following the finale are often referred to as Season 16 episodes. The Spanish Dub with its rogue translator was possibly the first episode of S16 but there were many others, and there may be more to come. Following the finale, fandom was also regularly reacting to multiple dubs, many scripts revelations and interviews given by actors and creators during online panels. Destiel went canon on multiple occasions, and fans also celebrated the monthly anniversaries of Cas's love confession.

Given the wide ranging impact the events of Destielgate had on sites like Tumblr and Twitter, a metafandom has arisen.

In response to the finale groups of fans set up fundraisers in honor of each of the main characters:

Plus fundraisers in honor of some of the supporting characters: