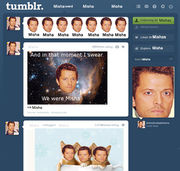 screencap of a tumblr dashboard on April 1, 2013. Screencap by skywalkerchick1138
The Mishapocalypse was a Tumblr meme associated with April Fools Day, 2013. On that day, SPN fans on social media switch their avatars to a particular photo of a grim-faced Misha Collins. Apparently enough people participated that some people would see their entire tumblr dash full of posts from "Misha". People who were not excited to see pictures of Misha Collins were confused or annoyed. At some point the meme became meta and evolved to include some very odd gifs and manips commemorating the experience of everyone turning into Misha.

According to Know Your Meme, tumblr user lokisleathersuit first suggested the idea for the Mishapocalypse in a 4 March 2013 post, changing he icon on March 31st and coining the term "Mishapocalypse."

There are rumors that the Mishapocalypse has also taken place on April 1st of subsequent years, though with less participation and with less impact.[1]

Following Destielgate and the Supernatural series finale, efforts were made to revive Mishapocalypse. This culminated in Mishapocalypse 2.0 taking place, primarily on Tumblr, on 31st December 2020.