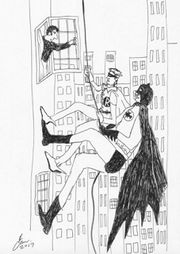 In 1966, the term "Batmania" took on worldwide popularity as the Batman (1966) television series took to the airwaves. Batmania had previously been an early 1960s fanzine by Bill "Biljo" White, its title originally referring to fan activity surrounding the comic book character Batman. The zine had the tacit approval of DC Comics, after White sent a copy of his first issue to renowned fan-friendly editor Julius Schwartz, who liked it, and even gave it a plug in the pages of Batman #169.

The Greenway Productions series was based on the DC comic book character from Detective Comics and a self-titled comic. The show starred Adam West and Burt Ward as crimefighters, Batman and Robin the Boy Wonder, in Gotham City. They had to defend citizens from a Rogues' Gallery of bizarre, colorful villains. [1] The Dynamic Duo championed the importance of using seat belts, doing homework, eating vegetables, and drinking milk. [2] The show is remembered for its "camp" style [3], upbeat theme music, and intentionally humorous, simplistic morality aimed at its largely teenage and family audiences. The show's style inspired a reinvigoration of the parent comics. Typically, episodes were aired twice a week, with a cliffhanger at the end of each Part 1 to keep viewers returning same Bat time, same Bat channel.

After the first season, a Batman motion picture (often promoted as Batman: The Movie) was released into cinemas by 20th Century Fox, the film featured the combined talents of four arch villains, the Riddler, the Penguin, the Joker and Catwoman, having formed "United Underworld". The increased budget permitted the creation of new stock footage: a new Batcycle and sidecar, a Batboat and a Batcopter. For decades, only this version of the show was available on home video, until complex rights issues and profit-sharing over the TV series could be untangled.

A highlight of the second season was an unusual crossover episode, guest-starring The Green Hornet and his sidekick, Kato, from another (but non-camp) Dozier production. Yvonne Craig was added as Batgirl in the shorter, third season, in a (failed) attempt to bolster ratings and appeal to a wider range of potential fans. The show also dropped to one episode per week. Throughout the 70s and 80s, the TV series ran in almost-perpetual syndication reruns.

By early 1967, the "Bat-mania" success of the TV series had led to a proliferation of tie-in merchandise. In typical meta way, it even began to influence the parent comics. In Detective Comics #365, the Joker "tries to counteract the popularity of Batman merchandise by selling cheaper Joker merchandise, designed to undercut the sales of Batman merch..." and, in Batman #194, "a staggering amount of Batman merchandise in Gotham City led to Blockbuster (who had a sort of insane fear/hatred of Batman) going crazy again..." [4]

In later years, several of the cast members were involved in TV spin-offs and revivals, including The New Adventures of Batman (1977 animated series), the live action Legends of the Superheroes (two episodes, "The Challenge" and "The Roast"), an appearance on Family Feud, and Return to the Batcave: The Misadventures of Adam and Burt, plus two animated DVD/Blu-Ray specials, The Return of the Caped Crusaders and Batman vs Two-Face.

In 2013, the rights issues over a home video release for the TV series were finally resolved and brought remastered DVDs and Blu-Rays [5] and interactive Digital HD comics [6] to new and previous audiences, and renewed fannish interests in the show, particularly in online message boards. DC Comics released a 30-issue comic which used the likenesses of the actors (despite a few exceptions for which clearances were not possible), and even adapted an unfilmed, "lost" Two-Face story, once proposed by Harlan Ellison. Several crossover miniseries have also been published, in which Batman and Robin (and sometimes Batgirl) meet the likes of The Green Hornet, The Man from U.N.C.L.E., Steed and Mrs. Peel (The Avengers of UK TV), TV's Wonder Woman, and Archie Andrews of Riverdale. A one-shot comic featured a meeting with the Legion of Super-Heroes.

And, as the arch villains: 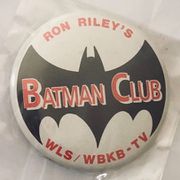 Ron Riley was a radio DJ for WLS Chicago from 1960 to 1971. In the mid-1960s, Riley began commentary on the "Batman" TV show on his radio program, which was soon expanded to create a Batman Fan Club. He was often photographed broadcasting in a Batman costume. A collectible button was included as part of the fan club membership package, along with a certificate signed by Riley (and Batman himself) and a sticker. [7] This Batman club became hugely popular, and even resulted in Riley guest-starring on a 1967 Mr Freeze episode, as an usher in "Ice Spy".

The fanzine Batmania (later renamed Beyond the Clock) became an early conduit for discussion and debate for fans of the comic book iteration of Batman when the TV series was imminent. Several issues featured Adam West on the cover.

Another US-based club could be contacted by writing to Masked Heroes Dept. on Melrose Avenue, Hollywood, CA. Their "Batman & Robin the Dynamic Duo Fan Club" distributed Batmogram News, a membership card, dance steps for the Batusi, and photographs of the actors and the TV Batmobile for $1.00.

In the UK, an Official Batman Fan Club was promoted on the reverse of A & BC "Batman" gum cards (a reprint of the US Topps art cards). Based in Heanor, Derbyshire, English fans could join by sending a "Bazooka Bubble Gum" wrapper and a Stamped Self-Addressed Envelope (SSAE).

The pending arrival of the new Tim Burton-directed "Batman" motion picture (1989) resulted in a revival of the 1966 series on TV and even the tie-in 1966 movie in cinemas. In Sydney, Australia, a fan troupe eventually known as Harpic Productions was asked to make costumed appearances, and create a "Rocky Horror Picture Show" vibe with some audience participation, while the movie played on the big screen. The characters made their live entrances timed with the movie's opening credits. Robin ran past the screen with a shark fin on a stick during the helicopter scene. Black balloons were passed around the audience during the "Some days you can't get rid of a bomb..." scene. Without the need for instruction, the patrons burst their balloons at the appropriate time.

Battalion: the Australian Legion of Batman Fans was a fan club embracing all aspects of Batman, but particularly the Adam West & Burt Ward Batman TV series. The inaugural meeting of Battalion was at the Sugar Reef Cafe, Glebe, after the 1989 movie's gala premiere. [9] In 1990, club members were interviewed about the "Batman" series on an episode of Australian TV's Couchman. [10]

Commencing in 1989, the Batman Television Series Fan Club was a newsletter dedicated to the 1966 TV series, published by special events publicist, Hal Lifson [Management], out of Sherman Oaks, CA, USA. 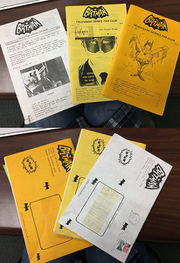 The TV series itself toys with romantic het attractions between Batman and Catwoman, Batman and Marsha, Robin and Pussycat, Bruce and Barbara, and, in the movie, Bruce and Miss Kitka (Catwoman). When Lee Meriwether appeared as Lisa Carson in Season Three, Bruce's attraction to Lisa was a fun in-joke and callback.

It seems that some fans wrote and shared the inevitable slash stories about Bruce and Dick. [11]

A 55-minute, parody fan film mash-up (or crossover), in three-parts, is Star Trek vs Batman (2006). It was produced by Christopher Allen of Indianapolis, IN, USA, and was been released on Youtube. [12] A "Making of..." special, Behind the Cowl is also available. [13]

In 2013, with rights issues finally resolved over the DVD and Blu-Ray releases of the TV series, Mattel secured the actor likeness rights for a short-lived 6" line of Batman (1966) action figures, with Batgirl finally added a year later. Funko made a set of "Wacky Wobbler Bobble-Head" figures. Figures Toy Company began selling 8" Mego-style action figures from the series, and managed to cover a large number of main characters, their alter egos, many key villains, costume variations, and even sets of henchmen (G.O.O.N.s) and molls. Sadly missing were likeness rights for Neil Hamilton and Madge Blake, so no Gordon or Aunt Harriet figures were made. MezcoToyz produced Batman '66 "Mez-Itz" figures and a Batmobile to scale. In 2017, Funko began selling a line of 4" action figures, including rare "chase" figures and the TV Batmobile, but sales were not strong enough to result in the long-promised second wave. Funko also released distorted "Vinyl Idolz" and several waves of "Pop!" figures. Both Mezco and McFarlane Toys produced Batcave playsets and new 4" and 6" action figures, respectively, in 2021.