You may be looking for the zine Star Trek.

Trek is a hybrid magazine. It has many elements of amateur zines (fan fiction, some fan art, con reports, fan letters, interviews with fans), but it was very much a for-profit venture.

It began in 1974 and ran for nearly twenty years. The first three issues, perhaps more, are tabloid-sized (11 x 16). The most popular articles were eventually collected into 18 The Best of Trek books published from 1978 to 1996. More information is here at Trek Today.

Throughout TREK's run, several articles were published with speculations on the connection between Star Trek, Sherlock Holmes, Doc Savage, and the Wold Newton Family. There were also a few articles comparing and contrasting James Kirk and Horatio Hornblower.

From "Best of Trek"

In 1978, the editors told fans why they started this zine series -- from the introduction to "Best of Trek," an annotated pro-book collection of things from the zines:

Thanks to Star Trek, our society and technology is about to take a quantum leap in the next fifty years or so. Why? Consider this: Millions of young, impressionable people are out there, right now, watching Star Trek. And they see a wonderfully advanced technology; men and aliens working together. They see what could be. And then they go out into the world and see what is. Can anyone wonder that these people are going to prefer the idealized Star Trek vision and carry it with them all their lives?

And here's the exciting part. Some of these people (not all of them, or even most of them, but some) will go on and gain the necessary skills to change our technology and society. And with the enthusiasm and determination that the idealized view of Star Trek has given them, they will indeed start to transform our world into that vision.

It’s wonderful, and if will happen. We have no doubt. It’s one of the primary reasons we started Trek. Sure. Trek is a labor of love, but it is also our statement of belief in this wave of change which will happen because of Star Trek.

We started Trek almost three years ago with a specific purpose in mind; to give Star Trek fans a professionally produced magazine in which their interests would be upper- most, We wanted to augment the personal views; to push the dreams along a little bit.

So, no facet of Star Trek has been too small for too big!) for us to cover, as long as we felt that it would be interesting, entertaining, and educational to our readers. In this vein, we have mu articles on everything from the mechanics of the Enterprise warp drive to a guide for making a Star Trek needlepoint wall display. And we are constantly on the lookout for new writers with fresh ideas. So if you have an article or feature which you feel would be suitable for Trek, please send it to us.

As we know our readers are very much graphics-oriented (thanks to the wonder of television), we supplement these articles with photos and artwork, and constantly strive for a fresh and exciting presentation of our articles and features.

Thanks to the enthusiasm of our readers and contributors, Trek has become the leading Star Trek magazine. This is especially gratifying as Trek is sold only by mail and is not readily available to most of our readers. [1] 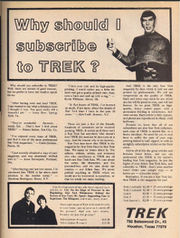 It seems as if there isn't a Star Trek fan anywhere who doesn't love TREK the moment he lays eyes on a copy. And the reason why is no mystery.

And TREK is the only Star Trek magazine by fans which is laid out and printed by professionals. We will not compromise on the quality of TREK. Each and every copy must be one which any fan will be proud to own. and will last forever. So we print TREK on high-quality, heavy coated paper, with a permanent binding in extra-heavy, full-color covers. Each article is fully typeset, and photos are reproduced in sharp, vivid halftones. Because we know that all of our subscribers are also Star Trek collectors, each copy of TREK is mailed flat, in a heavy envelope. No need for you to ever have to suffer the pain of your copy arriving folded in half, ripped, or with an unsightly subscription sticker on the front Add to all of this the great articles and features listed below, and you can understand why TREK is the nation's leading Star Trek magazine. So join the legion of your fellow Star Trek fans, and subscribe to TREK. Don't miss another issue! Order your sample copy — or better yet — subscribe today!

Remember, if you are a Star Trek fan, then TREK is the magazine for you! [2] 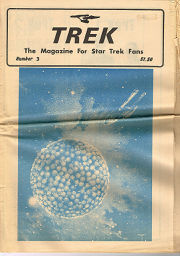 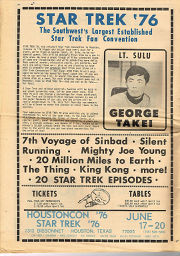 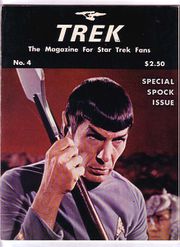 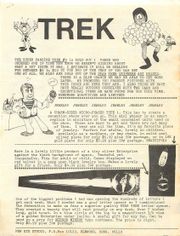 flyer for issue #4, and other Trek swag

TREK is truly impressive. With the lithographed repro, dozens of great photographs, and good articles, you can't go wrong.

This TREK is a "Special Spock Issue." Along with this theme, then, are presented three articles - nearly half of the zine - concerning Spock. The first is "Mr. Spock: Supporting Cast to Superstar" by Janet Smith, discussing the character's growth within the series and in public popularity. Next comes an interesting feature: "Spock Scrapbook"- reprints of portions of articles (from Janet 3nith's collection) that appeared in the late Sixties in the TV and teen gossip magazines. I hope these are continued. And finally, "Mr. Spock: A Personal Memoir" by Leslie Thompson, about the impact the character of Mr, Spock had on her personal outlook towards life. There is also a good-sized article, replete with great photos, about "Space 1399." It was obviously written before 1999 began showing here in the U.S., and is mainly concerned with a trip to the studios where it is filmed. The authors, Kike Clark and Marc Wielage are fans of the "Super-mar ionation" TV shows of the 1999's producers, Garry ana Sylvia Anderson.

There is no fannishhess about TREK. Everything is geared toward a professional looking slick format. The emphasis is on articles and lots of photos. The one convention report by James Van Hise of the 1975 N.Y. ST Con (Feb.14-17), while being well written, didn't really contribute to establishing a feeling/mood of intimacy that marks the admittedly amateurish fan publication. That that this is bad or undesirable, however. What Star Trek fandom could really use at this time is a good, professional, regularly appearing magazine devoted to Star Trek and associated fringe interests, that doesn't try to rip off Star Trek fans with an outrageously high price or by just printing a whole lot of photographs, or some other exploitive editorial attitude. And the more I look at it, the more convinced I become that TREK now is, or could someday be just that magazine. On the whole, then, and with little exception, the articles are all easy to read and are entertaining as well as informative. A good buy at the price. Recommended. [3]

Trek 5 was published in July 1976 and contains 40 pages. Back cover by Steve Fabian, interior illos by D.F. Holman. 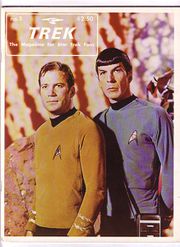 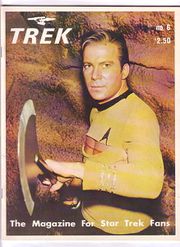 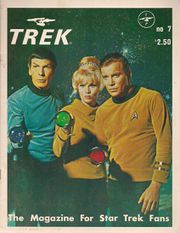 Trek 9 An Evening With George Takei; A Look at Leonard McCoy; Time Travels In Star Trek (with a rebuttal), and a special 11 page Star Wars section with a review, credits, special effects and photos. Also: Trek Roundtable.

If you are a Kirk fan, an insatiable Shatner devotee, or a Trekker, with a special interest in starship commanders, then this issue is a good investment... It is 40 pages of marvelous Kirk/Shatner. The articles range from 'Jim's Little Black Book' by Irwin to 'A Brief Look at Kirk's Career' by Leslie Thompson. Included with these articles are a large number of photographs. All in all, well done. An article by Mark Schooney called 'Bill Shatner, An Acting Critique' is a short history of Shatner's career and includes some excellent photographs such as the one from 'Kingdom of the Spiders'... If you are an insatiable Shatner fan, as I am, this issue is well worth the price [$2.50]. If you're interested in Trek fiction , then you'll have to look elsewhere. [4]

Trek 11 was published in 1978 and contains 44 pages. Wraparound cover by Mike Minor. 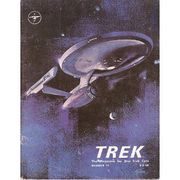 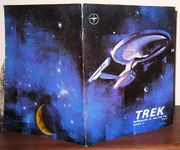 front and back covers of issue #11 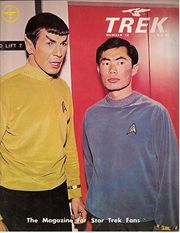 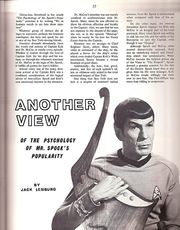 inside page of issue #12

Trek 13 was published in March 1979 and contains 40 pages. It was to be the first issue to contain zine reviews. 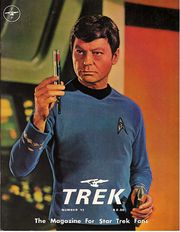 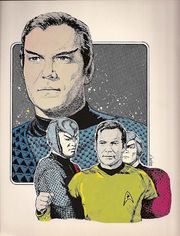 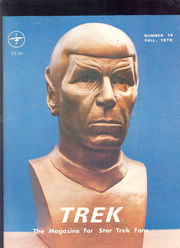 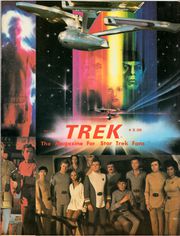 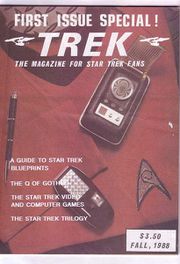 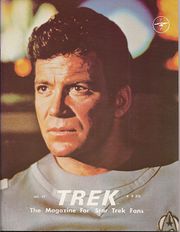 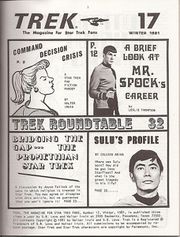 inside page from issue #17 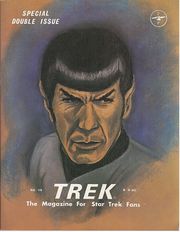