From Fanlore
(Redirected from The Sahaj Universe)
Jump to: navigation, search

Sahaj is an original male character created by Leslye Lilker. Stories about him take place in what fans often called "The Sahaj Universe".

Sahaj is Spock's son, and he comes into Spock's custody after the boy's mother dies.

The Sahaj stories appeared in a number of zines;

Like Kraith and other popular fan-created universes, the Sahaj Universe spawned much fanon, and even the fans had a hard time keeping it straight. When a fan used a word that Leslye Lilker had created in a story, the fan and the editor of the zine it appeared in had to apologize. "In "And God Against All" In R&R XII, Collette Mak used the term, Vljn'd'Jt, which is a term coined by Leslye Lilker for the Sahaj universe. Collette thought it was one of the usual terms in Treklit. I knew it was Leslye's, but I missed It. Both Collette and I apologize; the term is Leslye's, and our use of it was unauthorized." [1]

In August 2015, Leslye Lilker added to Fanlore: "Apologies to Collette Mak. 40 years ago I was a real jerk. I should have been honored that Collette thought enough of the term to use it. Besides, I didn't create it. It was given to me by Trinette Kern. The place is Val'jn'jt these days, and if you use it -- well, thanks. [2]

Some of Sahaj material was lost at a con. It is unknown if it was returned to its creator.

From IDIC #4: "At Bicentennial -10 in New York: a spiral notebook containing two hundred handwritten pages of an unfinished novel, and two pencil portraits of Sahaj. If anyone knows where these two items are, or inadvertently picked them up while visiting, please return them to to the editor of this zine. I will reimburse postage. Thank you."

S'Con the First will be held at the Ramada Inn-Airport, San Antonio, TX, April 25-27, 1980. Fan Guest of Honor will be Leslye Lilker, editor of IDIC and author of the Sahaj series. Dr. Michael H. Hart, formally of NASA & author of numerous articles on Extraterrestrial Intelligence, will be guest speaker. Tickets are $10 for all three days. There'll be ST episodes, In Search Of episodes, sf films, art display & auction, costume contest & editor panels & fanzine tables, etc (no pro dealers). Tickets, information, suggestions, write to Lynda Kaye Boots [address redacted]. Attendance will be limited to 350. 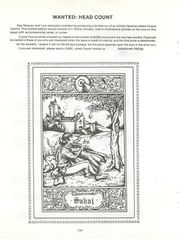 A 1978 proposed zine called "Crystal Visions" -- "Gee Moaven and I are seriously considering producing a limited run of an artistic fanzine called Crystal Visions. This limited edition would consist of a 'Sahaj Fantasy', told in illustrations (similar to the one on this page) with accompanying verse, or prose. Crystal Visions will be a limited run, based on the number of SASEs received in the next few months. Flyers will be mailed to those of you who are interested when the issue is ready for mailing, and the final price is determined. (At the moment, I expect it will run $5.00 plus postage, but the price depends upon the size of the print run.) If you are interested, please send a SASE."

In 1978, an art zine by Gee Moaven and Leslye Lilker was proposed. For unknown reasons, it did not make it off the ground.

The last Sahaj novel was to be called "And Straight On 'Till Morning." It was to take place ten years after The Bronze Cord. In Universal Translator #22, Lilker wrote: "This will be the last novel in the Sahaj universe. Overlapping the end of ST:WK, it will be the ultimate resolution of the relationship between Spock and Sahaj. ASOTM is in draft stages now, but may be released late this year [1984]." This zine was never published, at least in this form.

Lilker also wrote of continuing the Sahaj series in a number of personal statements and in the proposed zine sections of ad zines from 1978 to 1984. For more information, see Sahaj Collected.

In the second issue of Obsc'zine, Leslye wrote a Letter of Comment as though she was Sahaj, and commented on the K/S Premise:

...I object strongly to the theory that my dad and Uncle Jim have engaged in a homosexual relationship. They’re friends, not lovers, and it’s because of Ms. Fish’s outstanding story ‘Poses’ that I must hide Obsc'zine when it arrives. Although it was well-written, absorbing and, if one were to accept the premise, quite believable, my grandfather would not approve, and most likely would forbid any further association on my part with humans.

So, therefore, I’ll hide it. I’ve got the perfect spot, too: under the stack of ‘zines called IDIC. Peace and long life, 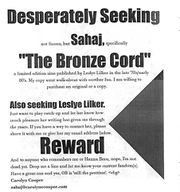 a fan's 2004 query, printed in the MediaWest*Con program book

The ST fanzine readership's taste is becoming ever more sophisticated as our writers strive to become better and better. This is making it harder for new writers to break into print in our field, a mixed blessing. Leslye has received a lot of hissing, boos, and jeers for her very clumsy, very juvenile first Sahaj stories, and I'm sure many, many people lost whatever regard they had for my tastes when I promoted the early IDICs so vigorously. So it is important that all of you obtain and read 'The Forging' and ponder just exactly what the difference is between Leslye's style then and now. It is misfortunate that she is rewriting those early attempts. If you haven't read the original IDIC, try to get it. If you are just beginning to write -- or just beginning to edit -- a fanzine, you can learn a lot from this study. The early IDICs, the first Sahaj stories, are a pure example of a towering talent in the raw. 'The Forging' is the culmination of a line of maturation for that raw talent. The Sahaj series will soon be available collected, (and I hope that the unrewritten versions can be made available on request to students) is the most striking example fandom has yet produced of the transformation of the gangling amateur into a threshold professional writer. Leslye has my undying gratitude for having proved my confidence in her justified. 'The Forging' is the best ST novel I've read this year. [5]

Sahaj. Sometimes I feel lonely. Everybody liked that rotten tyke except me. I always thought ha was an obnoxious and unreal little creep. It's not that he didn't have some real kid-like qualities, and the stories I read were well written, but the character seemed off-balanced, skewed. On top of that I had trouble with the characterizations of Spock, Kirk and Sarek. Probably the biggest stumbling block was the one I also had with Kraith. The Federation and the characters I envisioned were so different from the way this other person thought of them that I could not get into stories built on premises difficult to accept. I think that I can suspend my disbelief for a short story and enjoy it even when it doesn't match my concepts but that for novels or long series, I can't manage to sustain it. [6]

Half of the reason I love the Sahaj series so well is because of the lovely Alice Jones illos.[7]

On the subject of K/S or not K/S, years ago I began to find when reading genzine stories that I couldn't read them if they hadn't the potential or at least the hidden opportunity to be K/S whatever the author's views on the subject. For example the Sahaj series (if you can get hold of these, do so, they are classics in the best sense.) I disliked the original premise, that Spock has an illegitimate son by a woman who has no interest in him or later in the boy. (Too complicated to explain here but it works and Sahaj is a wonderful character.) The author, Leslye Lilker wrote a series of stories detailing Spock's learning of the child's existence, Sahaj's upbringing, and the eventual coming closer of father and son. Not much chance of K/S here and I didn't fancy reading it but I was talked into it by a friend who said that you could put your own slant (if you see what I mean) on the relationship—and she was right— you can. You see Spock has no interest in the woman, his loyalty to his Captain is overwhelming and they share a mind link. Spock says to Sahaj that Kirk is more than his friend. When in The Forging (which is the finest of the works), Kirk beams down to join Spock and Sahaj on a Vulcan desert journey, I have no trouble in seeing a K/S relationship between them, even though Spock tells Sahaj that his bond with Jim is fraternal. Well, he would, wouldn't he? The boy is only 11 or so. The problem with all this is that I believe that Leslye was very anti K/S. So where does that leave us? Is it 'immoral' to read someone's story in a way that is against her/his express wishes? [8]