Starsky & Hutch Historical Vids is a songtape collection compiled and researched by Flamingo. It was shown at ZebraCon 2001, Connexions the next year, and probably SHareCon in 2002.

From the accompanying booklet:

The first VCRs were called VTRs, and showed up around 1978. Blank tapes cost $25 a piece. SH was in its heyday. It stayed in syndication — mostly uncut— for many years. Many can still only find uncut eps from tapes made by generous fans in the early 80's. About the only source of uncut copies of The Fix are from these tapes as every station in recent times has cut the bedroom scene and often the scene of Hutch's addiction. Likewise, the charming tag of Starsky & Hutch Are Guilty hasn't been seen in almost 25 years except on these uncut tapes. 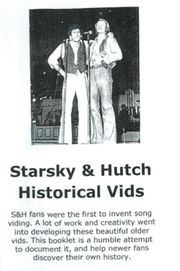 front cover of the accompanying booklet by Flamingo

In the earliest vids — then called "song tapes" — there were less story vids since it was difficult to frame one with the limits of the equipment. There were no flying erase heads. Every time a vidder cut in a clip there was usually electronic garbage left on the tape, some of it altering the soundtrack. Some early equipment could do fadeouts. What VTRs could do was hold a freeze frame cleanly, and this was used a great deal. Some of the earliest vids consisted of a freeze frame of the guys' faces over an entire song. Early vidders would use a scene even if it had credits over it if they needed it. They would use freeze frames and stills to extend the desired clip so it would be as long as they needed it to be. These are not things vidders could get away with today, but even with the wobbling soundtracks, freeze frames, and very long clips, fans greeted these early vids with astonishment and appreciation. The fact that it was possible to overlay a different soundtrack over familiar scenes gave fans an outlet to view familiar footage in new ways. This is demonstrated very well in early vids like Somebody's Knockin' and The Rose. Fans have always had a great, if quirky, sense of humor, so a lot of the early vids were joke vids, with one line of a well-known song illustrated by a single clip, or mixing dialog from one episode's scene to an unrelated scene for humor. The Laughing Torino was this kind of vid and also incorporated pornographic footage of men ejaculating or men stroking other men's bare rears with dialog of the guys taped over it. The Laughing Torino was originally broken up into its individual jokes and scattered throughout a collection of song vids so that the tape was broken up by these short moments of humor. Another early vid was built around seven frames from The Fix from the hug in the alley in The Fix. These frames, when shown slowly and advanced one at a time, made it look like the guys were kissing. The frames were called the Magnificent 7 and debate raged around it in letterzines and among fans at the time. Another popular song vid was made by taking the show's four different seasons of credits and playing them over themes from other shows, like Rawhide, or to pieces of classical music, and jazzed up versions of the show's theme. As the equipment improved, timing became more critical, stories more thematic, the cuts closer, shorter, and more meaningful. Cuts are cleaner, but there are still rainbows and jagged edges. Vidders weren't concerned yet with issues such as whether to use jump cuts or whether a song was sung by a male or female vocalist. Point of view would only become an issue as vids became more sophisticated and refined. The focus of most of the early vids was the intense relationship between the guys, and it was rare that a sad vid was made for this fandom. SH may have the smallest percentage of melancholy vids! The first vids were conceived by Terry Adams, executed by Kendra Hunter and Diana Barbour, with credit for ideas for songs and scenes also going to [Melanie R] and Carol Huffman. This is documented in the The Boy Can't Help It by Bonnie Raitt (in which the VTRs used are given names and thanked). In the credits from the tape of Pam Perry and [Jean C.], Diana, Terry, and Kendra were "gratefully acknowledged" for "the creation of this art form." The older vids on this tape were taken from early generation tapes generously donated by [April Valentine] from her personal collection. (In the case of [April Valentine's] vids, they were her masters.) The vids were copied onto SVHS tape and then professionally duplicated to VHS tape for distribution. Since SVHS has more lines per resolution than normal VHS tape and loses very little resolution on copying, these may be some of the best quality copies of these older vids available. While some of them are rough looking from a modern viewpoint, they give us historical perspective on the earliest vidders and how they began exploring a new art form. Many of them are still terrific vids!

At Connexions in 2001 SH fandom celebrated seeing the very first computer vids done in this fandom thanks to Cindy Robinson, a new vidder. Seeing these old vids lets us enjoy our history and appreciate the creativity of fans who had so little to work with: two VTRs, a stop watch, very expensive tapes, and a brand new idea. Enjoy! Flamingo

2014 Comments from Its Creator

There was some controversy on those booklets, as many vidders at the time disputed whether Diana Barbour and Kendra Hunter created the first vids. So, many of them felt certain facts in the booklets were wrong. However, much much later, Kandy Fong researched this. I put her in touch with Diana Barbour directly, and Kandy could not find any evidence that anyone had created what we consider song vids before them, validating the information I had. Kandy later did a historical overview of vidding at one of the vidder cons and made her findings public.[1]

See reactions and reviews for I Remember LA.

See reactions and reviews for The Rose.

See reactions and reviews for People Will Say We're In Love.

See reactions and reviews for Penis For a Brain.

See reactions and reviews for The Texas Tape.

See reactions and reviews for The Boy Can't Help It.