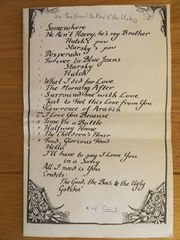 original playlist that accompanied The Texas Tape in 1988. This playlist came from a fan in The Netherlands, showing that at least a few songvids made their way to Europe.
.

The Texas Tape was one of the early songtape collections made in Starsky & Hutch fandom.

Exactly when the tape was produced is unclear, but it was listed in the Encore Awards held at The Paul Muni Special in 1985. The tape came in second place. Kandy Fong remembers receiving her copy in 1983.

In fact, the name "The Texas Tape" may be applied by fans to two different songtapes. The one received by Kandy Fong in 1983 lists completely different vids created by the Three Sisters (Linda Brandt, Lucy Keifer and Donna Williams) and Kendra Hunter and Diana Barbour and contains many of the same vids that appeared in a later 1985 songtape collection by the same group called The Magnificent Seven (Starsky & Hutch songtape). This tape, The Magnificent Seven (Starsky & Hutch songtape) by "Diana, Kendra & Terry" won first place for best songtape in Dec 1985 in the Encore Awards.[1]

The second tape, produced on or before 1988 lists Carol Huffman, Terry Martin, and Elaine Hauptman. The December 1985, issue #12 of Best Friends reported that "The Texas Tape" won second place for best songtape in the Encore Awards. That version of the Texas Tape lists "Carol, Terry & Elaine."

From S and H #28 (December 1981): a fan writes of ZebraCon #3: "The con was underway. Rooms filled with laughter and cigarette smoke. Wine flowed with love. Zines and stories and song tapes took our time… a song tape was born. The reward was given this year as we watch the results of your hours of hard work. ‘What I Did for Love.’ ‘Another One Bits the Dust.’ ‘Just to Feel this Love.’ ‘Forget Your Troubles, C’mon Get Happy.’… Give yourself a hand, Ladies. Your work deserves more.”

I have never seen Pros, but someone sent me a video cassette full of music videos featuring SSH, S/S, B/D and other sundry items. ....

Just another note about music and certain songs as they pertain to S&H. In the aforementioned tape, I have S&H put to songs like "Holding Out For A Hero" and "Making Love Out Of Nothing At All". Now, my taste in music is pretty versatile and leaning more heavily in the direction of rock and roll, heavy metal, etc., but I find myself becoming very attached to songs that are put to S&H stuff. Even some (*gasp*) country songs like "Every Which Way But Loose" and

"My Heroes Have Always Been Cowboys". Who was it that noted, "Lyrics have never been so lovely..."? So true![2] 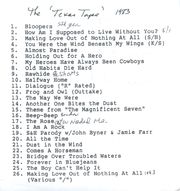 The 1983 playlist, donated by Kandy Fong. This playlist may in fact be The Magnificent Seven (Starsky & Hutch songtape).

Vids by Three Sisters (Linda Brandt, Lucy Keifer and Donna Williams) and Kendra Hunter and Diana Barbour. This tape may in fact be The Magnificent Seven (Starsky & Hutch songtape).

Vids by Carol Huffman, Terry Martin, and Elaine Hauptman. This may be the actual Texas Tape as the vidders were from Texas.