Stacy D began vidding in the late 1980s. Her work appeared at numerous convention vid shows such as Bascon, Friscon, Escapade, and ZebraCon. She also served on the Bascon concom and volunteered at numerous other conventions such as Kiscon and Escapade. 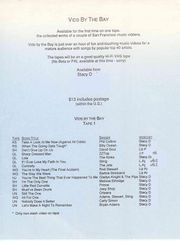 Songtape Flyer from the mid-1990s

In and Out (movie)

Stacy was also the author of several important pieces of vid meta:

When Stacy first joined Virgule-L the slash mailing list she posted an introduction. It is posted here on Fanlore with her permission.

"My name is Stacy [D]. I started this name (Slashy1ru2) specifically for this e mail group as I have a tendency to 'save as new' files I want to reply to or whatever - so some people will know or recognize my 'usual' on line name Micrazy2.

I started in Trek fandom in 1972, when I attended a few conventions and shared my love of Trek with several friends. I fell out of fandom around 1975. When The Motion Picture came out, I went into the used book stores and started collecting Trek books again. I retruned to fandom when I found a local Star Trek club in 1983. When I read "Star Trek Lives", there was a line about Steve Barnes, and her x-rated writing and I thought, "I want to read that!"

I found my first fanzines at a convention in '83 or '84 and was thrilled. I was looking for x-rated and found slash - One Night Stand. The dealer did mention that it was KS and was that what I wanted? Knowing that I wanted x-rated, I said it was fine. I was surprised, titilated and enthralled.

I didn't "seriously" expand out of K/S until I got into Quantum Leap in 1989. I was obsessed with that show to a point that I HAD to write a story. I thought if I could stick a video camera in my ear, I could just tape the damn story. QL is the only fandom I'm published in at this time. I started a QL slash newsletter (which I have let slide for far too long) called S/A under the name of Micrazy Press.

When TNT started showing Starsky & Hutch, I jumped in with both feet. I've co-written a S/H story and I have a couple of other S/H stories that I'm working on.

I've made a few music videos that have been shown at Escapade, Friscon, Virgule and Zcon.

As everything enjoyable is either illegal, immoral, or fattening I'll be hip deep in sin."

"I was browsing through the used zines at Bill Hupe's table at ConFrancisco in 1993, and wished out loud that I could find a copy of Courts of Honor -- I'd seen the illustrations for it in Nome, and knew it was difficult to obtain. A voice behind me said, "I have a copy you can borrow." It was Stacey [D.]. We'd never met before, but I gave her $5 for postage, and she mailed her copy to me a week or so later. It might have been a small thing to her, but I'll always remember that she was willing to loan her rare and out-of-print zine to a total stranger. That's fannish trust."[1]

"As some of you already know, long-time K/S fan and KiSCon webmaster, Stacy [D] passed away last Friday, November 21. She has been integral part of the KiSCon committee for a number of years. When I decided to take on the task of hosting KiSCon in Seattle I was not alone. Stacy was introduced to me as the person to give advice about creating the website - something I knew nothing about. She not only gave me advice but agreed to do the website for KiSCon 2015.

Over the next several months, Stacy not only walked me step by step though what needed to be done for the website but she did it with patience and a great sense of humor. Whenever I was feeling a little overwhelmed, she would listen and help me work out the problem. She very much wanted KiSCon to be a success and worked hard to see that it is.

She has had that same effect on all the lives she touched in K/S fandom, always there to lend a hand and to listen.

It has not been just KiSCon 2015 she has done this for. Stacy has had a hand in doing the website for the last few KiSCon’s. Amanda and Rhaegal, who chaired KiSCon 2011, have said they could not have done it without Stacy’s help and hard work.

I was looking forward to her coming to Seattle so I could give her a hug and thank her for all she has done for me and for KiSCon. I wish I could have gotten to know her better.

In her honor, the committee, Amanda, Larissa, Kathy and myself, have dedicated KiSCon 2015 to Stacy Doyle.

Our hearts go out to Liz and her family and close friends.

"I will miss her. Our cons together just rocked, such a wry sense of humor."[3]

"It's hard to imagine Escapade without Stacey."[4]

""I remember her very much at Connexions. She was running the vid show there and I'd just finished [my vid] La Vida Loca and brought it to her to see if she would show it at the con. She was incredibly encouraging and loved the vid, and showed it as the last vid of the night she liked it so much. We corresponded back and forth for a number of years. when I got more seriously into vidding (between La Vida Loca and Discovery Channel) she sent me all the SH eps from a channel in California that had minimal cuts and excellent quality, two eps on a tape. I still have those tapes somewhere. She wouldn't take any money for them, not even postage. "Just make more vids," she said. "That's all the payment I want." I just showed her "Little Red Corvette" SH vid at SHareCon again. ..... She was super encouraging to neo-vidders. She even did I think three vids in Harry/Johnny fandom, which was nearly impossible since David Soul and Clint Eastwood had only appeared in one movie together. I can't believe she's gone! ..... I'm so sad. She was a lovely person."[5]

"Stacy was a big-hearted person who was always thinking of others. What a loss."[6]