Orac is an artificial intelligence, one of several computers on Blake's 7. It is voiced by the late Peter Tuddenham. Tuddenham reprised the role of Orac in the parody film Blake's Junction 7, where the computer is depicted drinking "a nice brown ale". Orac is played by Alistair Lock in the Big Finish audios. 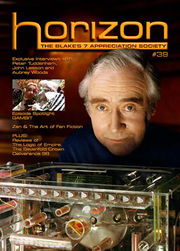 Tuddenham with Orac on the cover of Horizon Newsletter

Orac was created by computer genius Ensor, and has his voice, that of an irascible elderly man. It has the appearance of a clear perspex box with flashing lights on the interior. A key is required to interact with it. It is the most advanced AI in the Federation, at least in its opinion. Its capacities include

The crew acquire Orac in the S1 finale and it reluctantly assists them thereafter. Avon usually operates it, and in the episode 'Sand' (while under the influence of the mcguffin of the week) Orac tells Avon "I love you ... We will be lovers for a little while, or maybe for a long while, who knows." It was not taken into the tracking gallery and presumably remains somewhere on Gauda Prime.

Orac is a relatively popular secondary character in fanworks. It has around the same number of stories archived on the Hermit Library as Tarrant, and more than several human characters, including Dayna, Gan, Servalan, Soolin & Travis, although this proportion has not been carried over to Archive of our Own where Orac is not in the top 10 but all the characters mentioned previously are, aside from Travis. Orac is, however, mainly used as a McGuffin to serve the plot.

Orac is a popular character in post-Gauda Prime works, although again usually used as a device. One common trope is that Servalan finds the computer but needs Avon to make it work, or alternately she kidnaps and tortures Avon in order to get him to reveal Orac's location (this plot can also be used with Blake and/or his rebels in search of Orac). Other common uses of Orac is as matchmaker or otherwise instigator of the plot, picking up on the computer's behaviour in 'Dawn of the Gods'.

Fics that focus on Orac are likely to either humanise the computer, or go the other way and more consciously engage with the hard science-fiction aspects of the series than most other fics, investigating the ways in which Orac's existence differs from that of the rest of the crew.

Zine-era fanfiction is likely to depict Orac's speech between asterisks, while Zen's speech is usually depicted between pluses. This convention has not been carried over to internet-based fandom. The pronouns 'it' and 'he' are both used throughout fanworks for Orac, sometimes varying with character and perspective (e.g. Avon almost always uses 'it', whereas Blake is more likely to use 'he'.

Orac does not feature in much fanart for obvious reasons, however it does lend its name to a fan club, an fan award, and several zines:

Sarah Thompson listed stories in which Orac was paired with another character in 1998. The most common pairings were Orac/Zen & Orac/Avon. Traditional Orac shippy fic is humorous, presumably building on the idea that a romance with a perpex box must be a joke! But starting, perhaps, with AstroGirl's A New Machine (2005), Avon/Orac in particular has been treated increasingly seriously. The fan Clocketpatch is known to have Avon/Orac as her B7 OTP.

N.B. everything above this line is captured in Hermit's pairings list

There are also at least two fannish music videos of the Avon/Orac pairing (to "Automatic" and "Plastic Fantastic Lover;" also part of "Stuck with You," in a vid that pairs off the entire Scorpio crew: Dayna/Vila, Soolin/Tarrant, Avon/Orac), and I've seen one that hints at Vila/Orac. You know that scene in Ultraworld where Vila is teaching Orac jokes? He's leaning back on the couch, heaving with laughter, with Orac in the foreground? Imagine that to a soundtrack saying solemnly, "People are still having sex..." [1]