It was published in the US and was meant to be for the "net-impaired." It was issued in 1997 only and had three issues.

The Need for a US Blake's 7 Infozine

Bowen created "Orac's Oddities," in part, to fill the hole left by the cessation of Cephlon in December 1996.

THE DECLINE IN B7 FANDOM IN AMERICA: If American fanzines and newsletters keep on dropping by the wayside, pretty soon our English connections will be all we have left. Graham seems to think CEPHLON now will not be continued by another editor. Do you realize that unless someone decides to become CEPHLON's editor that after December there will not be ONE B7 newsletter left In America??? Phooey. And, no, I can't do it. I just don't have the required skills. [1]

While Bowen felt she did not have the "required skills" for a formal newsletter, she did feel up to creating a more informal publication that was "Orac's Oddities." Also from October 1996:

ORAC'S ODDITIES: I might start a small fan service (nonprofit) called ORAC's ODDITIES using my home address. I am talking about mainly giving information (like prices & addresses of zines), selling a limited amount of things from my own collection, perhaps producing a few things such as stickers (but not zines), and selling things for other people. Perhaps it'll just be a temporary way to fill CEPHLON's demise? You might even consider it a "Poor Woman's Guide to B7 Fandom" since I don't believe one exists now. I'm mainly thinking about being a service for Americans. I wouldn't want to intrude on Janet Ellicott's or Horizon's territory. Perhaps on the net, though, this service exists??? Does it? Maybe I should call my service NOT THE NET (or Don't Click Your Mouse Around Here, Babe). I may scrap the cutsie name and just use my own. I don't have it planned out now (which I'm sure is painfully obvious). This "good deed" will probably meet the usual B7 end!!!!

From the first issue in February 1997:

Hi, fellow fans, fanatics, and fabulous fellows of a sci-fi kind. This is a low key attempt to give BLAKE'S 7 information and perhaps sell some merchandise. This is for the "net impaired," the roadkill on the information superhighway (like me), but I do welcome people of the "net" kind and hope you participate in these old-fashioned printed pages. This is available only in 1997. #1 is in Feb./March. IF there's enough response, two more issues will follow (summer - about June & fall - about September). If you have any news/ideas, send them.

Orac's Oddities 1 was published in February 1997 and contains 10 pages.

Oddly (ironic, considering its title), there were multiple editions of this first issue.

From the third revision -- February 28:

There were problems with the first ORAC ODDITIES, even with three revisions. And,yes, some people did get pages 7 & 8 mailed to them later. I hope they remembered to staple it to the rest. That was the latest information about the campaign for a B7 special and the article by Dee Leery Us.

Besides misspellings, some information was inaccurate. By the way, only some copies had a color 2nd page. (I couldn't afford color for everyone.) And this is free because I can't charge for something that can't promise to be the latest information or even evidently have totally correct information. (OO is my contribution to B7. I do it out of love.) I can only print what I know and unless a lot of B7 people decide to help, this n/l can only be of limited value. The 3 issues are Feb., June, and September, 1997. You are encouraged to xerox any of this and share it. If you want one, all you have to do is send me your address. I HOPE YOU WRITE LETTERS TO THE BBC ABOUT A B7 SPECIAL in 1998. If you miss the suggested dates, write anyway.

Following are some comments about the first Feb. issue - not all of which will apply to this 3rd version which is 80% corrected/updated. 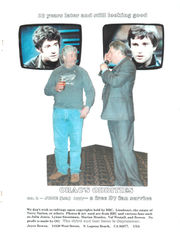 THIS is the contest issue. Feel free to participate in any or all 7 contests. Please send your answers before August 15th in one envelope. Winners will get a variety of prizes. Unlike real life and BLAKE'S 7, there will be no losers. Every entrant will get something. Answers will be in the September issue.

If you think OO is a little eclectic, I want to emphasize I accept all help from anyone. I will print what I get (tho" I may edit. Well, try to edit.). I cannot print what I don't have. SEND IN NEWS BY SEPTEMBER 1st for the last Issue of ORAC'S ODDITIES. {My telephone is [redacted]) I will do what I can- but I am NOT psychic, on the net, or in the "know." I apologize for misspellings, goofs, and any outdated or wrong data.

Contributors are Faye Bull, Sue Clerc (especially for her telepics in # 1), Carol McCoy, Judith Proctor, Ginny Syn, the people listed on the front, and various others not named. Thanks everyone who helped.

Other publications: You may reprint items in this. Fans: Please share with others. Xerox as you wish.

Orac's Oddities 3 was published in September/October 1997. It was the last issue.