a flyer for the series

Mélange is a gen multifandom anthology "dedicated to the many worlds of media fan writing." [1] Each issue contains original prose, poetry, screenplays, and articles.

The back covers are all identical. See issue #2. 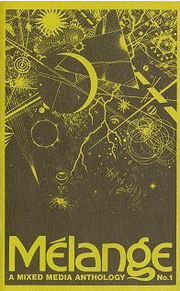 Melange 1 was published in 1983 and contains 68 pages. The illustrations are by Barbara Fister-Liltz.

We've got a little bit of this, a little bit of that, a pinch of m-m-m-m-m-m for good measure and we're serving it up as a most appealing, intoxicating brew called MELANGE. Welcome to our debut issue...beautiful, don't you think? My co-editor Joan and I couldn't be more delighted and certainly more surprised by the wealth of really fine writing contained within the covers of our first edition. When we initially broached the idea of a new mixed media anthology, we only considered a one-shot zine, selecting the best of a multitude of universes in prose and poetry. To be honest, we really went into this thinking we could persuade friends to clean out their bureaus and desks and give us their old, unused, yet decent bits of writing. We're heavily into recycling! So, while we'd anticipated being little more than a clearing house for unused, sometimes obscure material, we were literally gifted with a cornucopia of fresh, alive and vibrant treats. And the stream of submissions keeps coming — the original concept of a one-shot book was immediately scrapped and we're gladly embarking on a new series. We couldn't be happier! We offer to you, dear reader, a variety — that's the name of our game— every thing from dreamworlds, from the world of THE MAN FROM ATLANTIS to the dying/rebirth born in Rick Deckard's BLADE RUNNER universe to the whimsical wit of a sleekly handsome and mysterious REMINGTON STEELE. We are everything...mmmm, delicious!

Mélange 2 was published in 1983 and is 44 pages long. The art is by Barbara Fister-Liltz. 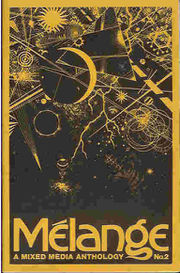 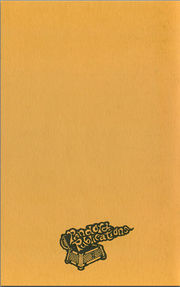 back cover of issue #2, all of the back cover look like this
From the editorial:

MELANGE began as a fantasy for us and in less than a year, it's blossomed into a fantasy for a lot of other people as well. We are beginning to see ourselves in a new, more sophisticated light and we've come to realize our little offering is here for some time to come. Author Robert Bloch was kind enough to accept and review a copy of MELANGE I and his admonishment was that we are no longer creating fanzines out here—rather, we have grown into a magazine. Kinda like the sound of that, don't you? It's not snobbery, either, but a sense of class and maturity, a feeling of a university-style publication that will (hopefully) be a stepping-stone to real pro fessionalism for the talented writers and poets who have so graciously filled the rooms of our home between these covers. To each and every one of you, many, many thanks for making us something special...by being so very special yourselves. To everyone who blessed us with supporting and reading our first go-'round, our gratitude and affection...we're alive and well and growing because your fantasies have taken on shape, form and substance.

Mélange 3 was published by Pandora Publications in May 1984 and has the subtitle: A Mixed Media Anthology. It is digest sized and has 68 pages (reduced type size). Only 100 copies of this fanzine was published. Art by Barbara Fister-Liltz. 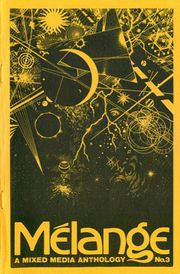 If, as they say, the third time is the 'charm', this issue of MELANGE will not disappoint... On this voyage into the many worlds of media fantasy, we'll again encounter Deckard, Rachael and the Ripper in the stunning sequel to "Edge of the Blade". Our exciting cargo includes a satirical romp in the Hanover Street universe, and a chilling television script based on the series, Logan's Run. What voyage nowadays would be complete without a stopover or two in the Star Wars universe, which includes an exciting new literary form--a triologue! We also make a short trip to visit the port-of-call known as the Knightrider universe where, a few words say, oh, so much! We have been told that our poets are exceptional talents. Who are we to deny this as you will see when the worlds of Blade Runner and Star Wars unfold in magic imagery before your eyes.

Mélange 4 was published in 1984 (probably around December) and is 81 pages long. The art is by Barbara Fister-Liltz.

This issue has a recipe for "Arrakeen Delights," a Dune inspired cookie recipe: "In accordance with the dietary laws of the Fremen of Arrakls." Substitute cinnamon for "melange." 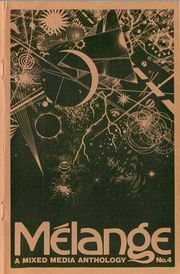 front cover of issue #4
From the editorial:

Melange IV contains a variety of fiction, script and poetry reminding one of the picture of trees against a clear blue autumn sky, trees whose leaves furnish us with a visual delight. Curl up next to a cosy fire whose light casts dancing shadows on the walls and whose warmth adds to the pleasure. Fitting atmosphere and a space in time where we can leave behind the mundane world and share, if only vicariously, the many worlds of media fantasy. We are, indeed, fortunate this issue to welcome a writer who has been gone too long, as far as we are concerned, from the world of fan fiction. She has written a chilling tale which takes place after the events in Indiana Jones and the Temple of Doom and is the prelude to a larger, more terrifying story. Who, among us hasn't been a tiny bit curious about the "mysterious" Remington Steele and his equally "mysterious" past? An unusual answer to the question is offered in this issue of Melange....Jaime Sommers, the "Bionic Woman" is in fine fettle in a TV script, as once again she balls Oscar, Rudy and the OSI out of another ticklish situation....Return of the Jedi promised to answer many questions concerning the middle Star Wars trilogy. This issue of Melange presents two stories that take the answers a step further. Hanover Street, the bittersweet wartime romance of Halloran and Maggie, typified the love stories of World War II. This "alternate ending" story by one of Melange's favorite authors, will hold your interest long after you finish reading it, asking for more! We are always delighted to present our poets and in this issue, they encompass the worlds of Mork and Mindy, To Catch a Thief, Remington Steele, and Star Wars. As we are about to embark on our fifth issue, my amazement and delight concerning the success of our 'one-shot' knows no bounds! We continue to receive marvelous contributions and hearty encouragement from our readers for our efforts. Our deepest appreciation to them all!

Mélange 5 was published in 1985 and 64 pages. Art by Barbara Fister-Liltz and Frank Liltz. 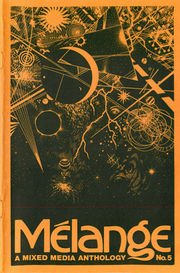 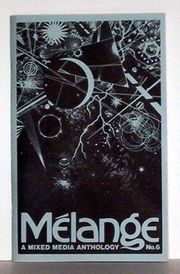 The art is by Frank Liltz (general) and Barbara Fister-Liltz (fannish). 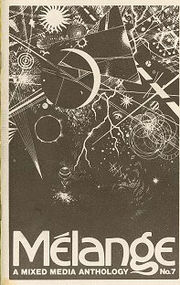 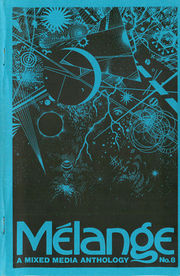 [For the Birds]: One of the earliest serious stories Leah and I collaborated on. In fact, I think it might be the first serious one. Although it isn't a slapstick type comedy like Bizarro 7, it does have its own element of absurdity. The original illustration is included. Originally published in Melange and later reprinted in B7 The Other Side #6 (Why was this printed in an Australian "adult" zine? I don't know. The story is not even R-rated). [2]

[zine]: I came across this zine recently. The story by Terrell and Mila hints delicately at the possibility of A/B, but so discreetly that the story passed as gen in two out of its three publications. (It wasn't unusual in those days, BTW, for a story to see print three times on three different continents.)

But I was very puzzled by the second B7 story, because I don't have it anywhere in my listings, and yet I'm sure I've read it before. I even think I remember seeing it on a full-size page, A4 or letter size as the case may be, but maybe I'm imagining that.

Authors, help! Leah and Annie, do you remember whether this story was ever published anywhere else? Am I imagining having seen it in another zine? (It's also remotely possible that I read this very zine before, in my early days in fandom when I devoured huge quantities of fiction very quickly, and then semi-forgot about it.) [3]