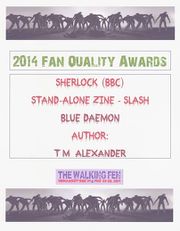 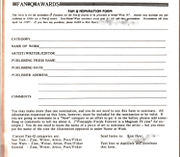 In 1981, Lori Chapek-Carlton explained a change in rules in an attempt to bolster the number of people voting: "We're putting in a new regulation this year, for the Fifth Annual Fan Q Awards. In order to insure representative and fair awards, we are going to insist on participation in the nominations and voting. At least one-third of MediaWest*Con membership has to partici pate, otherwise there will be NO AWARDS, gang. Nominations should begin after December 31 and be in by January 31, 1981, so they can be listed in the 2nd Progress Report in February. Anything published in a media fan zine in the calendar year 1980 is eligible. The categories are: Favorite Fanzine, Favorite Short Story, Favorite Long Story, and Favorite Poem. Since all the other categories are judged by the piece(s), Favorite Single Artwork must be judged by the same criteria, and it must be a published piece."[6]

Oddly, there is a listing in a Beauty and the Beast newsletter called The Helper's Network Gazette about the 1995 Fan Q award winners in that fandom. It is unknown if these were "official" Fan Q winners or a sub-division run by and recognized only in the Beauty and the Beast fandom. Another anomaly is that the BatB nominees did not have to be published in the previous year, another clue that this may have been some sort of rogue process.