In the age of the Internet, many digital fanworks are available for free, but fans still buy and sell fanworks, especially those that exist solely in physical media. 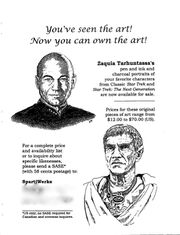 a 1993 flyer for a fan's art for sale (SpartiWerks and Zaquia Tarhuntassa), printed in the zine Choices

Fan art is often sold through art shows, auctions at conventions and artists' personal websites. Both originals and prints are sold.

Fan artists also create art on commission, sometimes to illustrate scenes in fanfiction. The price of commissioned art usually depends on the medium (traditional media often being more expensive than digital art, oils/acrylics more expensive than pencil sketches), the size of the artwork and its complexity (number of figures, background etc).

Fan crafts are often sold through websites like Etsy, as well as through personal websites.

In Japan, many conventions exist mainly to sell doujinshi.

Before fandom had access to the Internet, most fanworks were consumed in the form of print fanzines. Zines cost money to produce and distribute.

Many, many published zine reviews focused on whether the zine was worth the money.

There was much discussion and controversy about the purpose of zine reviews. Some fans felt reviews should only be positive and "nice." Other fans believed that comments about zines should be a guide for others regarding whether the zine was worth the money.

Fans almost never commented on "wasted time" spent reading fiction, but instead about whether the zine was "worth the money." Fiction and art was much less plentiful.

The Internet Brings a New Dimension

Many fans pointed out the exchange of money meant that you should be purchasing something of value:

...none of these things will change the basic fact of Internet fanfic -- it's a writer's world, not a reader's. Unlike 'zines, which you pay for and are allowed a certain amount of expectation, Internet fan-fiction comes with no guarantees, no rules, no respect. It's an ever-renewing pile of dung in which you must dig deeply for the oft-hidden jewels... [10]

In 1999, a fan explained how she felt the internet leveled the playing field in terms of personal taste:

there are a lot of stories I'm not wild about that have great public appeal, and that's fine. No one makin' me read 'em, nor are those readers compelled to read my stuff, which I assume they in turn don't find appealing. That's one of the nifty things about the web, as has been observed. You click "next" and the problem goes away. But would I want to pay $10 or $20 and find I had such a story? Aiiiiiiiiiiiiiiiii. [11]

When computers and internet access started to become a reality for some fans, there was a shift in costs. There were many essays and comments by fans about how computers weren't free.

For several years I myself was hoping the internet would go away. It seemed economically and technologically elitist; as Raku points out fan fic on the web is free if you can afford a $1,500 computer. [12]

So let's start with the "netfic is free" idea. In currency terms, it isn't free for me, and never has been. By the time I had bought my computer, my monitor, my printer, a cart to put all of that on, a chair to sit at the cart to use it all, ink cartridges for the printer, paper for the printer, disks to save things, diskholders to hold the disks, binders to store the printouts... well, I was looking at about $3,500 for the setup. Plus $20/month for my ISP. That's how much I had to pay, and in part am still paying, for all this free netfic. [13]

Yes, printed zines are expensive. But so are computers and internet accounts. Someone who can afford to buy, say, six zines a year, may not be able to afford a computer and an internet account. Sadly, this is, in many ways, already a country of haves and have-nots. Do we really want to add K/S to the list of small luxuries which are unavailable to those of modest means? [14]

There also seems to be a common misconception that zine editors/publishers make profit off their publications while fanfic is free on the web, so let us restate here that we don't make *any* money with it. We're fortunate if we come out even, and we're publishing for love just as much as every writer or archivist on the web does. Secondly, fanfic on the web isn't exactly free either -- at least not for everyone. Most of us pay in hard cash for our Internet access. And while there's a lot of excellent fic on the web, it can be quite time-consuming to seek it out, which is another reason why we appreciate zines as a format where a certain quality control is in place. It's a service we appreciate and gladly pay for. [15]

Fans began to complain of wasted time and eyestrain, rather than wasted cash.

And currency aside, there's the most precious commodity of all: time. My time. My incredibly limited leisure time. I don't have 15 hours a day to read fanfic, blithely skimming and deleting until I get to something I like; on a good day, I have maybe 20 minutes. Maybe. If I give every story a 2-minute chance, and there are 10 lousy stories at the top of the pile, there goes my only reading time for the day. Something that uses up all my time is going to piss me off more than something that uses up all my money; I can get more money, but the time is gone forever. [16]

Plentiful fiction meant that the option of "pushing the back button" on works that were unsatisfactory. Money wasn't an issue any longer.

Money and the Purpose of Reviews

Some fans felt that when money changed hands, it was a reviewer's job to make sure that a fan got her or his money's worth.

Unlike reading slash stories on the Net, when you read a bad slash zine, or simply one you dislike, you're out a considerable bit of cash, and now have to go to the effort of finding the zine a new home, to recoup some of your losses. It's not as simple as pressing a delete key. That's why I am honest in my reviews of slash zines. These are marketed stories, that are sold as a product. Granted, the publishers aren't making any money off of these zines. But they are charging the money it costs to publish them, which is often considerable. Most new zines cost around $25 US dollars. When you add on postage, especially to overseas, it really adds up. For that reason, I think zines have every right to be reviewed by their reading audience. I'm not into negative reviews of slash stories on the Net. Why waste energy on something that can easily be deleted and forgotten? But when we're talking rating a product this is bought and sold, it's different.[17]

With the exception of charity auctions, online fanfiction is not commonly written for purchase. It's rare but not completely unheard of for fan writers to ask for donations to cover their living expenses while continuing to write a popular story, but it is not usually phrased as purchasing the fanfiction.

Fanfiction that is printed in fanzines is technically written for purchase, since fanzines are bought and sold. However, the tribber's compensation is usually a free copy of the zine, rather than money.

Often, ROM hacks are sold on reproduction carts. These are often earlier versions and impossible to update.

Does the Content of Fanworks Change When Money Has Changed Hands?