For other fanworks of the same name, see Choice. 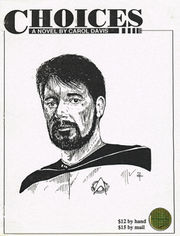 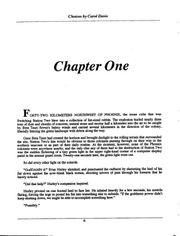 Summary from Bill Hupe's catalog: "When the USS Enterprise is called to Beta Tauri Seven, Riker is torn between an old lover from the Academy and his Starfleet career."

People always ask writers, "Where do you get your ideas?'

Sometimes there's a clear answer to that question; more often there's not. I've found story ideas in newspaper articles, bits of conversation I overhear, or things I see as I fumble my way through everyday life. Once in a while a friend will pass an idea on to me. A lot of my Next Generation short stories have sprung from lines of dialogue in an episode. One of the characters will mention something that happened in the "past", and I'll think, "So... what exactly was that all about?"

Choices, on the other hand, came out of noplace.

The first scene that evolved in my mind, and made it onto paper a few days later, was one around midway through the book, where Riker and his volatile ex-lover, Jenny Diehl, are together in the middle of the night in her quarters. Slowly, one page at a time, Jenny had a life, and a problem... and got to spend a reasonable amount of time kissing Number One. (Don't let anyone tell you that writing isn't at least 75% wish fulfillment.) Everything that happened to her along the way surprised me, because I didn't know then, and still don't, where all that stuff came from.

Grab a bag of chips, or some trail mix, or whatever your favorite munchie is. The collection of pages in your lap was a blast to write. I hope it's a blast to read.