Over the years, phones have been frequently used as central themes and devices in fanworks as they became more ubiquitous in the modern world.

Landline telephones at first rarely appeared as a central theme in most fanworks. Their use was casual, a background element of the modern age, much like cars, TV and radio (ex: see the Lovett phone image from Perestroika above).

A number of fanworks made the telephone their focus: 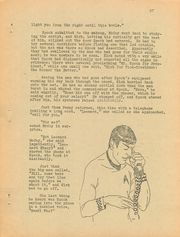 from Spockanalia #3 (1968), artist is Alicia Austin for Visit to a Weird Planet

With the advent of cell phones came texting.

Avengers fandom example of the popular Texts From Last Night Meme on Tumblr: these graphic combine an appropriate fandom-specific screencap with a real text message quoted on the Texts from Last Night website.

texting AUs, in which two characters - who have usually not previously met in the story - begin texting each other, often as a result of a wrong number, are extremely popular. This type of get together fic is entirely centered around the presence of cell phones in the story, and many texting AUs are even written entirely in dialogue, formatted as texts.[4]