In the Public Interest is a slash Professionals anthology.

a 1985 submission request printed in Discovered on a Rooftop

In 2018, it was reissued in print and PDF by Requiem Publications.

From a submission request:

WE ARE CURRENTLY SEEKING SUBMISSIONS TO THIS NEWLY PROPOSED PROFESSIONALS, BODIE AND DOYLE SLASH FANZINE. STORIES, POETRY AND ARTWORK ARE ALL NEEDED. STORIES CAN BE FROM THE SERIES, FANTASY OR HISTORICAL. NO DEATH STORIES PLEASE.

IF YOU ARE INTERESTED IN ORDERING THIS ZINE, PLEASE SEND A SASE. TO THE ADDRESS BELOW AS WE ARE ONLY TAKING ORDERS AT THIS POINT. WE WILL ONLY BE PRINTING AS MANY COPIES AS WE HAVE ORDERS FOR SO GET THOSE ORDERS IN. 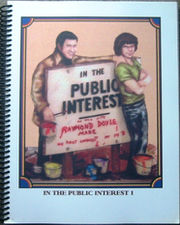 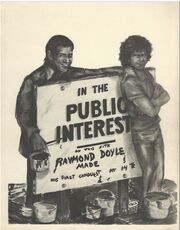 another later version of the cover, most likely printed this way to save money, issue #1: "On this site, Raymond Doyle made his first conquest at 14."

In the Public Interest 1 was published in 1985 and contains 234 pages. It has a colour cover by TACS, interior illos by TACS, Jean C., Pat Cash, WAPB, Ruth Kurz, and Eaton.

[zine]: [Regarding] the topic ("get 'ems", or h/c), check out the zine IN THE PUBLIC INTEREST. Most of those stories seemed to have Bodie as the "victim." In "Poison Apples" (though Ray got his share of being "gotten" in that one, too, but primarily it was Bodie); again, Ray did his fair share of suffering in "Lights of Home" (a wonderful "straight" story which surprised me with the depth of "heavy" emotional stuff there, considering that it WAS 'straight", and you don't usually see that in non-'/" stories) — but it was Bodie in that story who took the brunt of it again. And in "Blood Ties," poor Bodie really took an emotional beating! Similarly in "Deposit on Tomorrow." In fact... I think the only "Doyle-get-'ems" were "Practical Demonstrations" and, to a lesser extent, "Camouflage." [3]

[zine] All I can say of _In the Public Interest I_ is that I disliked it. Not a single story in it that I wanted, so I no longer have the zine. Not much on the reveiw front, I know, but I do recommend against getting it. It's a pity too, because the cover -- Bodie painting that sign he threatens Doyle with in ITPI episode "Here for the first time..." -- is very funny. [4] 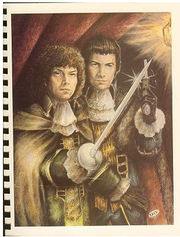 In the Public Interest 2 was published in March 1988 and contains 272 pages. It has a colour cover and black-and-white interior illo by TACS, black-and-white illos by Suzan Lovett and cartoons by Karen Eaton. Several of the stories are AUs, including an elf AU.

See reactions and reviews for A Couple of Fruits.

See reactions and reviews for Wrapped Around Your Finger.

See reactions and reviews for A Discerning Eye.

_In the Public Interest II_ is well worth the usual $15 resale price. The cover is by TACS, and though I find her work rather uneven at times, I like it. It's called Black Bodie's Treasure, and shows our lads in pirate (real not Tyrone Power stuff) gear. I assume it was inspired by the lovely AU pieces _Black Bodie's Treasure_ and _Black Bodie's Bargain_ in the on-line library.

As to the stories:

"A Struggle of Wills" by Shadowfax. A very short Zax piece where he has to win his love, Brandon, back from the Goblin King of _Labryinth_. Okay, but nothing to rave about.

"Matched Set" by Windy. B & D have been lovers for a few months, and they play a couple of jealousy games with one another at a pub. Actually a good story, and the jealousy stuff is neither angst inducing nor spiteful. More of a tit for tat game.

"A Discerning Eye" by HG. I LOVE this story. Marge of "Backtrack" is back. Turns out she's been playing up to Doyle to win someone else as her fifth husband. Works, but it depresses Doyle who thinks no one loves him. Marge suggests Bodie does, Doyle gets drunk, and Marge calls Bodie to fetch the golli. Great.

"Wine Dark Nexus" by Anne Carr. A marvelous AU with the characters of Brianhet and Damon. B is from Egypt, D from Atlantis and both are prisoners on Crete where they must survive the bull leaping. This is absolutely the only AU I've ever liked where B & D have different names. Normally I find that too distracting, but she has them so in character that I never even noticed. This story is also illustrated by several wonderful Suzan Lovett pieces -- although, word of warning my fellow Bodie lovers, her favoring Doyle is quite obvious.

"Negative Developments" by Meg Lewtan. Plot is that the guy with the camera in Stakeout took pictures of Doyle, too, and Doyle pitches a hissy fit, so Bodie gets the negatives. I disliked this one.

"Wrapped Around Your Finger" by Lezlie Shell. This is one of the many sequels to the on-line library story "Consequenes." And this story is in there as well. I don't care for the entire "series," but this one is tolerable. In it, Doyle turns the tables on Bodie, showing them they can make love instead of war.

"A Couple of Fruits" by Lezlie Shell. A fairly humerous first time story. Bodie decides to try having it off with Doyle and gets him drunk to carry out his plan. Only it doesn't quite work out the way he'd plan. Lots of fun.

"A Question of Trust" by Shadowfax. An elf story involving Eleron and Cavil. Worst story in the zine. Plot is just Eleron (Doyle) being accepted by Cavil's tribe after his own is murdered. Ick.

"Story Contest" by Anne Carr. Well sort of. This is just an opening chapter of a story set in the Wine Dark Nexus universe. Readers were supposed to finish it for the next issue. It led to the mediocre "Taemon's Cuckoos", but this opening bit was quite good.

"An Arabian Tale" by Denetia Arellanes. Another AU and a death story, but that's okay for me because its a past lives story with a very nice final sequence of Bodie and Doyle getting together in the CI5 universe. Doyle is a slave purchased by Sheik Ali al-Bodi. Story is okay for a non-AU lover, but I do like the final bit quite a lot.

The zine also contains poetry and several pieces by Tacs (I think the sketches are lackluster but the more elaborate works are nice). It's a big zine at 226 pages. [5] 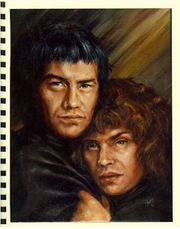 In the Public Interest 3 was published in 1991 and is 208 pages long. It has a color cover and interior art by TACS. 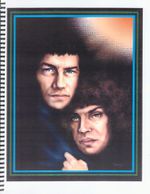 See reactions and reviews for Apples for the Lady.

Called "In the Public Interest III", it is of interest for a couple of reasons:

The first story is by our own Sharon (writing as Madeline Lee), and it's a good one. Since it has a nice 'rough sex -->rape' scene, it tied right into our earlier thread. The rest of the plot just happens to be one of my fav type stories "They are sleeping together, but not discussing it, and they totally misunderstand each other, leading to emotional (and in this case, physical) pain." Nice.

The second (by Debra Hicks) is a long a/u with Doyle as a Star Fleet officer and Bodie as a free-trader who saves his life. Until the end, it isn't obviously a cross-over, most of the activity is on Bodie's little two man ship. I liked the story, except that it has an incredibly lame mystery in it. Since I guessed the mystery in the first 5 pages, every time I was given another clue, I got annoyed.

I skipped the 3rd one,

The fourth was Pros crossed onto the movie, The Wicker Man. Aftrer the events of the movie, there is another dissapearence, and Bodie is sent to investigate. When he stops reporting in, Doyle is sent to find him, but Bodie no longer wants to be found, totally innocent of the dangers lurking... Not all of it worked, but it was a great premise. If you haven't seen the movie and you can stand watching totally over the top psuedo-paganism, I say GO.

_In the Public Interest III_ is another big disappointment and I'd recommend against buying it. The TACs covers are too dark and the stories all mediocre.

"Dancing in the Dark" by Madeline Lee is the only decent one and it has a lot of problems. Bodie decides he needs some uncomplicated sex after Doyle turns down his request to be together for the evening. Bodie choses his partner unwisely, gets hurt and has to call Doyle to help him. Doyle goes off and avenges him, then they have a talk about their sexual relationship.

"Real Sweet Dreams" by Frannie turned me off quickly enough that I didn't read it long enough to be able to summarize it.

"Free Trader" by Debra Hicks might have made the zine worth buying, but it is the longest story in the zine and is available in the on-line library. It's set in the Star Trek: The Next Generation universe, but Picard and crew are only cameo appearances. Actually owes more to the psycho computer in 2001 than to Trek.

"A Gift of Love" by Shadowfax and "Apples for the Lady" by TD Murphy also went unread after a quick skim. [7]