Arthur/Molly is the canonical pairing of Harry Potter characters Arthur Weasley and Molly Weasley, the parents of seven children including Ron and Ginny Weasley.

Though the pairing is not often the central focus of fanworks, the two are rarely split up or shipped with other characters.

Arthur and Molly attended Hogwarts together in the 1960s,[1] and were both in the Gryffindor house. It is usually assumed (though never officially confirmed) that they were in the same year at Hogwarts.

In Half-Blood Prince, it was revealed that Molly and Arthur had eloped young, like many other couples who were influenced by the climate of fear surrounding Lord Voldemort's initial rise to power.[2]

Arthur/Molly fanworks often include or allude to anecdotes Molly tells in canon about brewing a Love Potion in her youth[3] and taking a "nighttime stroll" with Arthur while attending Hogwarts, from which she got back at four in the morning and Arthur was caught by the caretaker.[4] 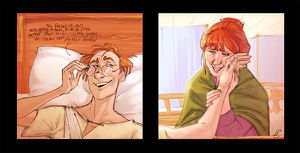 At St. Mungo's (2006) by Makani. An Arthur/Molly missing moment from Order of the Phoenix.