A fanzine library is a term applied to both formal and informal collections of fanzines that can be borrowed and read by fans. They are often referred to as "Lending Libraries" and are very much similar to Fanzine Reading Rooms which operate at many conventions.

Unlike convention Fanzine Reading Rooms, where the zines must be read and consumed on the premises, Fanzine Libraries often allow fans to check out fanzines and take them home for an extended period of time. Academic fanzine libraries maintained by Universities generally operate as Special Collection Libraries and restrict both physical and circulating access.

One unique library was the The Fanzine-Taping Service for Blind and Print Handicapped Readers, a fan-run service for those fans who were challenged by tradition print fanworks.

As soon as Star Trek fanzines proliferated, fans were calling for lending libraries. Early fanzines were expensive and print runs were limited, putting many fans into the awkward position of seeking out photocopied fanzines and being accused of zine piracy.

In 1973, Sharon Ferraro proposed a Star Trek Fan Literature Archive called Memory Alpha. Joan Verba remembers: "The August issue [of A Piece of the Action] had a proposal by Sharon Ferraro for a Star Trek Fan Literature Archive called Memory Alpha. 'The goal of MA,' she said, 'is to collect, catalog, and microfilm as much of the fan-produced literature as we can get our hot little hands on.' She then proposed to put all issues on microfiche for posterity. In the October issue, Sharon announced that 'Memory Alpha, the ST fan literature archive...has been accepted by the National Air and Space Museum.' This archive was a fine concept, but I have no information about it after the mid-1970s. Perhaps somewhere in the Smithsonian one may find a stack of fanzines, dating from 1967-1974, gathering dust in a corner somewhere." [1] 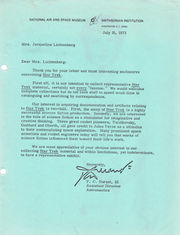 A July 1973 letter from "The National Air and Space Museum" addressed to Jacqueline Lichtenberg was printed in Berengaria #1: "Dear Mrs. Lichtenberg: Thank you for your letter and most interesting enclosures concerning Star Trek. First off, it is our intention to collect representative Star Trek material, certainly not every "fanzine. " We would welcome complete collections but do not have staff to spend much time in cataloguing and searching by correspondence. Our interest in acquiring documentation and artifacts relating to Star Trek is two-fold. First, the story of Star Trek is a highly successful science fiction production. Secondly, we are interested in the role of science fiction as a stimulator for imaginative and creative thinking. Three great rocket pioneers, Tsiolkovsky, Goddard and Oberth, all gave credit to Jules Verne as a stimulus to their contemplating space exploration. Many prominent space scientists and rocket engineers today will tell you that works of science fiction influenced them toward their life's work. We are most appreciative of your obvious interest in our collecting Star Trek material and within limitations, yet indeterminate, to have a representative exhibit. -- F.C. Durant, III"

By 1976, fans were still discussing the need for a lending library. One fan wrote a letter to the Halkan Council: "Being a librarian makes me think of a ST fanzine library -- like Memory Alpha... I mentioned an idea of requesting permission and copies of out-of-print ST fanzines to reprint them so fen will not be forever deprived of these 'classics' of ST literature.... Maybe the editors of these marvelous zines and gracious authors would be so kind as to grant legal permission, loan copies of their zines, give advice, encouragement, etc. This would not detract from the value of the original edition, because there are always those who want the first editions anyhow...." [2]

Other Star Trek fans tried to bypass fanzines and fanzine publishers and asked writers to circulate their stories directly to the readers, much like the circuit libraries that existed in The Professionals fandom. In issue 48 of A Piece of the Action Susan LaLoge announced the creation of a circulating library for Star Trek stories: "Do you like to read (or write) Star trek stories? Here's an organization you've got to join. It's a circulating library, of sorts, and operated for fun, not profit, so everyone can afford it. The initial deposit is $1 for bookkeeping fee, and $2 Xerox deposit. (In case you lose a story, we can get it back into circulation without delay). Stories will come to you in turn from the person ahead of you on the list, and you will mail them to the next person. Simple, no? Writers of course get no cash reward, but if they care to type their address on the bottom of their story, will get all the advice they can stand from readers....Writers are requested to send two copies of their stories and KEEP A THIRD! (Don't learn this the hard way like I did)." [3]

In 1981, Dark Shadows fans were interested in a lending library. From Inside the Old House #15: "And although I'm not going to get into the particulars right now, here is basically what I have in mind: To form a sort of 'rental' service of the various Dark Shadows items for the reviewing of the fans. I'd have allst of the items that I have in the 'library' and you would say which ones you would want to look at/listen to. There would be a fee for each item which would cover the cost of postage and you would be allowed to borrow them just like a library book. This is a rather simplified version of what I have in mind, but I welcome your comments and suggestions. As I said, I will develop this in the near future if the interest is there." This plan, however, was very short-lived. In spring 1982, this same fan wrote: "Due to a lot of problems I didn't take into account for, the DS library is being abandoned ever before it got off the ground. I was a nice thought, but it just proved to be too impractical." [4]

In April 1982, Roberta Rogow wrote about collecting zines for the New Jersey Paterson Fanzine Library in Interstat #54. It was a short-lived collection.

There were several more attempts to start up a lending library. In 1983, a fan announced in Datazine #26 that she was collecting "classic Trek zines, both PG and Adult, for a non-profit lending library. Condition is unimportant so long as the zine is legible; unbound copies are fine. Anyone willing to part with a copy or an authorized xerox of an O.O.P. zine, kindly contact me."[5]

In the end, none of these attempts gained widespread circulation, and often, didn't even get off the ground.

Enter Ming Wathne, the 1980s and the Fanzine Archives

It wasn't until the early 1980s that a successful lending library was launched. The base of this first library were the zines Lucasfilm had collected in his effort to control and observe fandom.[6] When the official Star Wars fan club folded, these zines were turned over to the First Terran Enclave, who ran the library for a year. When that library folded, the zines were not circulated until March 1990 when Ming Wathne took them over and created The Fanzine Archives: A Library for the Preservation & Circulation of Fan-created Material.

Ming eventually began accepting non-Star Wars fanzines, and by 2008, the Archives maintained a circulating library of over 300 fanzines and a permanent collection of over 3,000 titles. In early 2009, the Open Doors committee of the Organization for Transformative Works helped to place the Fanzine Archives with the Special Collections Department of the University of Iowa Libraries as part of their Fan Culture Preservation Project.

By the 1990s, fandom had sufficient interest and acceptance behind the idea of a fanzine library to allow the creation of several smaller fandom specific libraries:

Beginning in 1992: A Unique Library 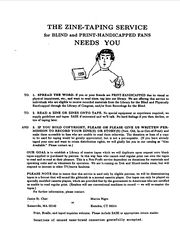 The Fanzine-Taping Service for Blind and Print Handicapped Readers was a fan-run library started in 1992 for fans who had difficulties with reading traditional printed materials. Fans recorded fiction onto audio cassette tapes that were then sent out to other fans.

After getting permission from a zine publisher, fiction from that zine was then recorded by a fan onto an audio cassette. That audio cassette would then become part of a library from which would be used to make other tapes. These tapes would be sold at cost to fans who'd requested them. To help ensure that only eligible fans would use these tapes, they were recorded in such a way that they would sound like gibberish on normal cassette players, rather than the cassette players sight-impaired fans received from the government. Sighted fans recored the fiction on regular machines, and the Janice and Marcia re-mastered the tapes for the special machines.

The Notable Exception: The Professionals Circuit Library - 1980s to the Present

While the Professionals fandom never had a fanzine lending library, from early on fans circulated fan fiction directly to one another. These stories became part of the The Professionals Circuit, which continues to operate today. Although the bulk of circuit stories never appeared in fanzines, many writers would release their fanzine-published stories to the 'circuit' after the stories had appeared in fanzines and had timed-out. On occasion, a fanzine publisher would take circuit stories and, with the author's permission, republish them in a fanzine format with better formatting, clearer typeface and additional copy-editing. This fluidity would cause some confusion as stories might end up on the 'circuit' by mistake or when stories that had been available on the circuit for years were declared suddenly 'unavailable' because they were now offered in fanzine format.

Given that most attempts at creating fanzine libraries failed in the 1970s, fandom's reaction to the concept remained purely theoretical for many years.

With the establishment of Ming Wathne's Fanzine Archives, worries similar to the zine piracy debates presumably took place.[9] Direct records of these discussions are currently not available, but the fact that Ming chose to circulate only out-of-print copies lends some weight to this idea. While a few fanzine publishers kept their zines permanently in print, it would have been harder for the typical fanzine publisher to argue their 'sales' would be hurt by a lending library once their zines were no longer for sale.[10] Later lending libraries followed suit and offered only out of print zines or zines donated directly by the zine publisher.[11]

Still, Ming, presumably out of an abundance of caution, allowed fanzine publishers until 1993 to opt-out of allowing their out of print zines to circulate. After 1993, however, she decided that the costs of catering to zine publishers changing views on zine lending were too high and restricted the opt-out policy.[12]