Public libraries have been one venue where fans gather for socializing, and for pimping fandom to others.

Some universities have fannish materials in their collections. These collections are usually in special collections and have restricted use.

Some cons have fanzine reading rooms.

Many fandoms that began with print fanworks have libraries available for use to their fans. See Early History of Fanzine Libraries.

Though it's commonly thought that the first all-Star Trek convention was held in 1972 at the Statler Hilton Hotel in Manhattan, New York, another convention predated it by three years. It was simply called "The Star Trek Con" and took place in the afternoon on March 1, 1969 at the Newark Public Library. The free event, organized by librarian Sherna Comerford Burley (at the time, Sherna Comerford) and Devra Langsam (co-editors of Spockanalia), was low-key and celebrity-free and attracted roughly 300 attendees. [1] For more, see Star Trek Con.

In the time before the Internet, some fans took their fannish enthusiasm to the masses via the public library via slide shows. Some of these gatherings included short talks, example print fanworks, episode showings, and refreshments! 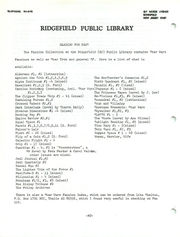 list of the zines at the Ridgefield Public Library in New Jersey, see Paterson Fanzine Library

The Paterson Fanzine Library was a 1978 collection of fanzines that was once housed at the Paterson Public Library in New Jersey. Roberta Rogow wrote about collecting zines for the library in Interstat #54 in April 1982. The library consisted of zines that were collected for the purpose of putting together the Trexindex. These zines were later moved to Ridgefield Public Library. This collection is now defunct.

Collections like this are far and few between, and probably short-lived.

The public meeting rooms of libraries are a host to many community gatherings, and fans have been using them to congregate for quite some time; print newsletters often listed public libraries as their gathering places.

Many cons had/have reading libraries, places were fans could read fanzines they otherwise did not have access to. Escapade is just one example.

By the 1990s, fandom had sufficient interest and acceptance behind the idea of a fanzine library to allow the creation of several smaller fandom specific libraries for making materials available to their fans: