Open Letter to Fanzine Readers, Contributors, and Publishers by Candace Pulleine was sent in 1993.

The subject was zine piracy.

Making copies of zines that were still in print could be financially damaging to many zine editors and publishers. It was an issue that was first publicly discussed in media fandom in the eleventh issue of Probe in August 1977. The editor, Winston A. Howlett, wrote:

Have you heard of the Underground? The one in ST fandom... They Xerox things. Lots of things. Like parts of fanzines, or whole fanzines, or even whole sets of fanzines. All without permission of any kind from anyone who had anything to do with the fanzine's production. And I'm not talking about just a copy for 'personal entertainment,' but five, ten, forty copies... whatever number fits their 'small circle of friends.' Sometimes they sell them, sometimes they trade them for other fanzines (copies or originals), sometimes they give them away...to someone else who also has free access to a duplicating machine and another circle of friends. I first heard about the Underground when a fellow zine editor stumbled across a Xerox of her visual series (elaborate comic book if you will) in the hands of a neo-fan at a con. Said neo praised the artist/editor for her work and casually mentioned that 'XYZ in California' had Xeroxed about forty copies and spread them all over the country... People with free access to Xerox machines make me very nervous, if just for the built-in temptation that the devices [will be] be used irresponsibly. What good is all the extra effort and expense an editor goes through to acquire a special story or article for an issue, when somebody with the 'Start Print' Syndrome can wreck the whole process? In case you hadn't thought about it, zine editors don't just give their works that extra effort just for the sake of the art, but to acquire new readers. In short, friends, when you fellow Trekfan starts drooling over your latest zine purchase, try gently imploring them to buy their own copy, instead of running to Daddy's office [1]. Xerox doesn't need the business, but we do.

In the late 1980s and early 1990s, there were strong feelings in fandom about some fans who were making copies of zines still in print and were, from one point of view, "stealing" from zine publishers by copying in-print zines. There were also strong feelings about zine editors who kept zines in print forever, thus continuing to make sales while the story authors never received any additional compensation. This coincided with growing resentment among other groups of fans regarding rising zine prices, often for zines which they felt were not worth the higher prices.

Many of these tensions came to a head at, and after, RevelCon 1993.

A Series of Open Letters: by Zine Publishers/Con Organizers

In 1993 and 1994, a number of Open Letters circulated in fandom regarding the photocopying of in-print zines. 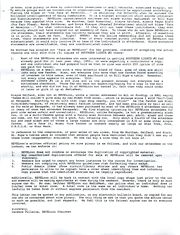 second side of letter, click to enlarge and read 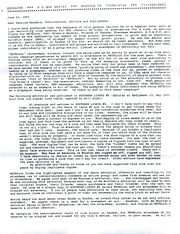 first side of letter, click to enlarge and read

Candace Pulleine, the chair of RevelCon, sent an open letter to fandom in response to the letters by Alexis Fegan Black and Bill Hupe. This letter was reprinted in several venues. One of them was printed in Southern Enclave #36 (summer 1993).

Her letter addressed several points, one of which that it was unfair and inaccurate of Black and Hupe to solely blame the attendees of RevelCon for the decline in the number of zines sold.

"There is nothing wrong with an anti-piracy campaign; we are all for it as we want zine publishing to continue, but if there is no proof to back up the sweeping statements, names (groups or individuals) should not be mentioned. We notice that only our group name has been referred to. We have become the example of the con where 'pirating going on there was phenomenal,' and therefore usable as a scapegoat, whether or not pirating zines is the normal for us, proven or otherwise. by using us in this campaign, fans will have a negative response to us, if they were not there or acquainted with us. Zine pirating is not done or condoned by the majority of the people grouped under the phrase 'fans at Revelcon' or REVELcon.' But by using us in the proximity to the phrases like 'the Kinko's crowd,' etc, the association, whether deserving or not, rubs off... The examples of where individuals are using REVELcon as a scapegoat keep being received. Is there no end to this smear campaign?"

Pulleine also pointed out that by printing some of these accusations in the editorial to the zine Southern Lights #6, that readers would forever unfairly associate RevelCon attendees and the con itself with unethical practices and that as long as a single issue with this editorial existed, the unfair statements would continue to be read by fans and the injustice would continue.

Pulleine excerpted a paragraph from this editorial:

"... if you bought a legitimate copy of this zine you just paid a lot more for it that you would have if the the thieves weren't stealing my property. If works like this: the more copies of a zine that can be sold, the lower the price of each individual issue becomes... this is the last issue of Southern Lights. There won't be anymore. The fans at Revelcon in Houston who ripped me off, ripped you off, too. I have absolutely no desire to invest my hard-earned money and even harder to come by time in producing a zine that can't pay for itself. Other editors have expressed the same opinions to me."

Pulleine cited several other reasons why there were fewer zine sales, including the timing of certain zines' publication and the appeal of their subjects to a wider audience. She suggested that editors who were having trouble selling their zines were having difficulties for other reasons and were using zine piracy and Revelcon as a scapegoat for other issues and failings.

In the end, Pulleine cited the convention's policy on zine piracy, and assured fans that the practice itself was not condoned by anyone in an official capacity of Revelcon. She ended her letter with permission that:

the letter be quoted in any publication, on any electronic bulletin board, or copied for anyone who is interested in zine piracy. The only thing we ask is that you quote the entire letter or as much as possible, not just segments."

First, I want to thank all of you who responded to the letters in last issue of TZC concerning pirating. Your reaction was, to my mild surprise, nearly all positive, and some of you appeared to be shocked that the practice is so widespread. Your expressed support of legitimate zine editors is greatly appreciated; most of you obviously understand the problem we face, trying to continue publishing in the face of a diminishing market for our product. We can only hold the line against pirating with your help: you are, after all, the controlling factor---the purchasers.

In this issue, in the interests of fairness (though I don't agree with all her comments), I have printed a letter received from Candace Pulleine of the RevelCon committee. Her assertion that observations of zine pirating at RevelCon amount to a "smear campaign" of the whole membership and the con itself seem to me to be a bit overreactive.

A while back, according to Bill Hupe, zine copying became so prevalent at MediaWest that members were bringing their own xerox machines to do large scale copying in their rooms. When the problem was brought to his attention, he took steps to halt the practice. No one blamed MediaWest, or Bill Hupe, nor least of all the whole membership. In the same vein, Reveleon was noted merely as the PLACE where the problem occurred; no one intimated that the whole membershjp was involved, so her references to "libel" and "smear campaigns" seem a bit explosive....

The fact remains that either the events Bill Hupe observed took place, or he is lying (which is highly unlikely); because we don't know the names of the people who were doing it doesn't mean it isn't true. [2]