The WOAD Society brought computer vidding into the spotlight, and marked the transition from VCR-era vidding to modern computer vidding. They learned about VCR vidding through the Media Cannibals and other members of the Escapade aesthetic, but transitioned quickly over to computers, receiving several derogatory comments about this at Escapade Vid Reviews. Their activities were also considered highly 'experimental' at the time, before becoming the norm.

Many of the members of the group knew each other through Highlander fandom, but most also had multifandom interests: Star Trek: TOS and TNG, X-Files, Hard Core Logo, Stargate, Pitch Black, The Matrix, Star Wars, Blakes 7, Wiseguy, English Patient, Buffy, Dark Angel, Hard Boiled and The Blair Witch Project were vidded, along with some humorous multimedia vids. Several of the members of this group went on to shape the Buffy Vidding Aesthetic.

The WOAD Society Presents...Because We Can

The first collection was released on VHS videotape. In an announcement to the vidder mailing list, the group wrote:

To order (we take Paypal!) and for more information see [address removed] or drop a note to: woad@xxxx

PLEASE DO NOT LINK TO THESE PAGES OR FORWARD THE URL TO ANY NEWSGROUP OR PUBLIC MAILING LIST. Really, we're serious about this. If you're not sure whether a list is public or not, ask us.

Because these tapes are being professionally reproduced, we have to know in advance how many orders there are. While we will do a few extras, we really can't afford to do a lot. Because we need to meet minimum numbers, we may or may not do a second run eventually, so if you want them you need to order NOW. DEADLINE FOR ORDERS is FEBRUARY 7th, 2002. We will do our best to fill orders that are received after that time, but we can't promise that we'll have the the tapes available.

EXPECTED SHIPPING DATE is MARCH 5, 2002, or thereabouts (it may take a couple of days to lug them all to the post office.

Liner notes are included with each tape but can also be viewed online.

Lyrics are not included with the tapes but are available in web or printable format.

Each tape comes in a hard case.

Warning: These tapes may be hazardous. They've got things that may disturb you, including, but not limited to, sex (of various kinds and involving various combinations of genders and species), romance, mysticism, technology, violence, humor in poor taste and characters you can't stand.[1]

The Long and Winding WOAD 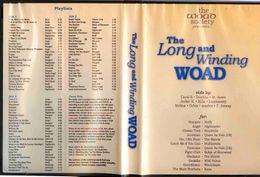