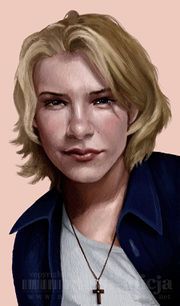 Taylor portrait by missi-alicja (2012).
Taylor Hanson (born 1983) is a musician from Tulsa, Oklahoma, best known as the middle member of the band Hanson and usually considered the frontman. He is the second oldest of the seven Hanson children. Since their second indie album, Taylor has sung lead on most of the bands' songs, although they insist the band has no lead singer.

Taylor Hanson is in the wrong profession. He should be a model. A supermodel. The top-secret weapon in the government's anti-terrorism strategies. The face of universal beauty and truth. The most notorious, revered and respected member of the most exclusive, exotic boy harem in the world. OK. We like that one. Taylor Hanson wearing nothing but a loincloth and patchouli, sleeping on fine silk pillows and feather mattresses under your striped tent in the middle of the Sahara feeding you strawberries when you beckon. (You buy him a palm frond for his birthday so he can fan you!) Oh yes. We do like that one.[1]

Friendly reminder that Taylor Hanson referred to himself as a “flaming masochistic narcissist” during his Hansonday lecture. 99% sure he meant “raging”, not “flaming”. Favorite part about it is you could SEE the look in his eyes as soon as the first word left his mouth. You could SEE him thinking to himself… oh crap.[2]

Taylor is the most common star in hanfic, as he has long been considered the heartthrob of the band. He is also the most likely to be portrayed as gay, a fact that was mentioned to Zac in a 2007 interview with The Advocate, to which Zac had the following to say:[3]

“That’s one end of the spectrum, and the other end is people sending you death threats. I would go with fan fiction any day. And Taylor has that thing about him-and hopefully, he’ll forgive me for saying this in an interview-he’s just a good-looking pretty boy.”

Manip of Taylor and Scott Moffatt by Shyeeyez

Although the two were rumored to have dated and Michelle's Hotel Paper album is supposedly about Taylor, little fic exists that features this pairing as more than just a background/past pairing. The series of oneshots titled On Hotel Paper by Sarah Irene feature the most detailed portrayal of this rumored relationship.

Although few fics exist for this pairing, aside from those by Ahestele, she succeed in making this a very popular pairing.

Similar to the above, rumors of Taylor having a secret relationship with Alex have persisted for years.[5] The relationship between these two plays an important role in the Avenues Series by Diamond, Guilt by Abby and SNAFUBAR by Ali.

Sometimes referred to as Scottay, this pairing was popularized by Aspen's long unfinished story Devil Angel.

Abbreviated as Naylor, the pairing of Taylor and his real life wife. Because of the shotgun nature of their wedding, this pairing provides more fodder for fic than most other canon pairings. Some popular fics to focus on the early years of their marriage are Road To Eden by Ashley and Love, Save The Empty by Elle.

Abbreviated as Tike. An early fic featuring the two is More Than Anything by Ariel Mark; a more recent and quite popular one is Rebekah's Caught In The Sun.

Abbreviated as Zaylor, the most popular incestuous Hanson pairing of all. Made popular by Akimbie's On My Own and Kerry's Lost Without Each Other Trilogy.