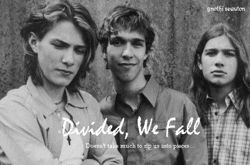 Holding Onto Nothing is a Hanson fanfic by Allison Way. It was written in 1998 and its sequel, Divided, We Fall written from 1998 to 2000. Allison's summaries are as follows:

Holding Onto Nothing is the story of Parker Lowell, a fifteen year old native of Rochester, New York whose search for his long lost twin brother is about to end in a way he never could have imagined.[1]

Divided, We Fall picks up a few months after where Holding Onto Nothing leaves off. Parker is about to embark on his summer stay at the Hanson house but has no idea what problems have been brewing between the family members since he last saw them.[2]

These stories are noteworthy because they contain no romance, and the male narrator is neither a Hanson or a love interest of a Hanson. The stories do contain references to abuse/child molestation, and were the works that created the popular long lost twin trope for the fandom.

I absolutely loved Holding Onto Nothing and Divided, We Fall. I think it was probably one of the first Hanfics that I read that kind of turned my idea of Hanfic on it's head because it wasn't a romance and had a main character that was a guy that wasn't a Hanson brother. I keep wanting to reread both stories but I'm afraid it won't have the same magic this time around because I'm so much older now.[3]

Holding Onto Nothing is not your average Hanson story. No girl moves to Tulsa and falls madly in love with Taylor, Taylor doesn't suddenly realize after years of friendship that he loves his best friend. These stories are good and fine, but if you want to go deeper and find some originality, look no further than Holding Onto Nothing.[4]

These two stories won awards in the Hanfic Awards, Just Cry Out Awards, Literary Hanfic Awards and Really Big Hanson Fanfic Awards. Allison was also given awards from Another Little Pretty, Hanson Rox Da House, In My Mind's Eye, Kiss From An Angel, Masterpiece of Hanson, Shimmer and Slink and Stuck In the Middle of Nowhere. The stories are also featured in the PlaceToHide.net and Various Artists halls of fame, as well as the Your Illusion top five lists.