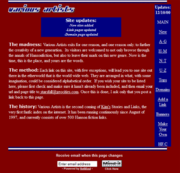 Screenshot of the website as it appeared in Dec 2000

Screenshot of the website as it appeared in May 2008 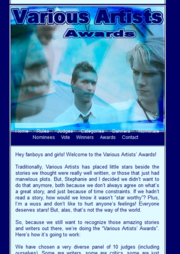 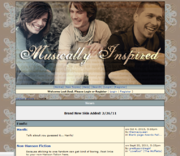 Screenshot of Various Artists Forum as it currently appears

Various Artists was a website, maintained by Amanda Dupuis, Kim Delphi, Krystal, Stephanie, which provided a directory of links to hanfic sites. It also hosted awards and challenges, and contained reviews and a hall of fame. A forum hosted offsite is still available and sparsely used.

The original version of Various Arists was Kim's Stories and Links. Opening in August 1997, it was the first ever hanfic link directory.[1]. It moved to HansonFiction.com in 1999 and was renamed. The site was largely focused on documenting the best of the fandom, having this to say about what constituted a classic:

And no matter how jaded you are or how much you hate love stories, this is a story that goes beyond. But, it wasn't just about what we liked and enjoyed, we decided that there are some stories out there that we may not like for a lot of different reasons, but they changed the face of fanfic such as Devil Angel.[2]

On an old version of the site, this explanation for its existence was given:

Various Artists exits for one reason, and one reason only: to further the creativity of a new geneartion. Its visitors are welcomed to not only browse through the annals of Hansonfiction, but also to leave their mark on this new genre. Now is the time, this is the place, and yours are the words.[3]

The biggest feature of Various Artists, which is still online and occasionally used, is its forum. Hosted offsite, it allowed for discussion of hanfic stories and activities, as well as other Hanson news. The section for lost stories is the most popular and still frequented by fans hoping to find old favorites.

Hosted in 2005, several well known authors from HansonFiction.com used this challenge to write new stories or add to their existing stories and series. It was hosted offsite, on a LiveJournal community.