From Fanlore
< Taylor Hanson(Redirected from Taylor/Isaac)
Jump to: navigation, search 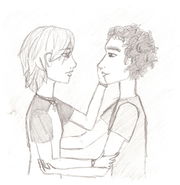 Taylor/Isaac is the RPF pairing of Taylor Hanson and Isaac Hanson. It is most often referred to by the portmanteau Tike.

This pairing appeared as early as 1999, in stories by early erotica authors such as Albertane Child and CandyStix. The term Tike was in usage by 2007, though its origin is unknown.

Although this ship is not often written about, it does have clear appeal. Taylor and Isaac's relationship has been rather antagonistic for years, creating a sort of enemyslash appeal for fans.[2] [3]