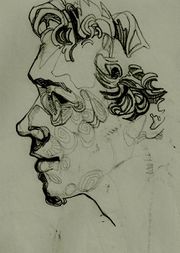 Isaac Hanson (born 1980) is a musician from Tulsa, Oklahoma, best known as the eldest member of the band Hanson. He is the oldest of the seven Hanson children. Isaac was the original songwriter and lead singer for the band, taking lead on nearly all of the songs on their first two indie albums. In recent years, he has had vocal issues (discussed in Hanson's Re:Made In America documentary) that forced him to do less and less lead singing. He was hospitalized for thoracic outlet syndrome in 2003 and in 2007 suffered a pulmonary embolism that required surgery.

Being the actual older brother, he often takes on tropes that accompany that role. He has embraced the whiskey drinking, cigar smoking Old Man Hanson persona , a nickname he actually gave himself. [1]

A discussion on the LiveJournal community Use For Your Words tackled how difficult and unpopular he seems to be amongst authors:[2]

So, why doesn’t Isaac appear more as the lead or a significant player in fics? Do people still view him as the awkward, gawky, lanky teenager? Do people view him as angry and bitter? (angry and bitter aside from not being able to let his issues with the girl who cheated on him go. I mean, have you seen him get into Hand In Hand? Lol. For real sir. Let it go.) Is he more romantic, cheesy, hopeless romantic, gentle thus making it harder to make him darker or complex? Is he slashable? Why does it seem he’s not versatile? Do people just have a hard time finding the right character and personality for him in fics?

I'm not sure what it is about Ike. I'm with shewasred in that I don't think he's as attractive as his brothers (nobody would say he was "pretty"; you could make that case that Zac and especially Tay are :) ) off the bat. And I think being the absolute oldest out of all the siblings, he sort of takes on that surrogate parent role - like a third parent. Used to being "in charge", helping out, bossy. Hmm, now that I think about it, those traits might work kind of sexily as a dynamic for slash. But mostly I see him as kind of a parental, disapproving, stick-in-the-mud figure, and I love the idea of Zac and Tay as a "when the cat's away, the mice will play idea" - the two of them up to all kinds of no good while clueless parental Ike is blissfully unaware. Who needs a curmudgeon raining on the parade?

A case of pairing the spares, since these two were arguably the least popular in their bands.

Due to Isaac's fandom of Jonny Lang, these two were somewhat popular as a pairing. The Saga of Ike and Jonny by Sunnie is one example of a fic pairing the two.

Abbreviated as Tike, this is the more popular incestuous pairing featuring Ike. An early fic featuring the two is More Than Anything by Ariel Mark; a more recent and quite popular one is Rebekah's Caught In The Sun.

Abbreviated as Zike. A small, rarely used LiveJournal community for this pairing, zacnike, exists. Because of their age difference, especially in the early years, this pairing is less popular.