Nazi is a shortening of the German Nationalsozialist (“National Socialist”) and refers to a member of said political group, or a member of other far-right groups with similar ideas and aims.

Members of the National Socialist Workers Party (Nazi Party) feature in several canons which fannish works are created in. Small fandoms such as Casablanca (a Yuletide fandom) and the slightly larger Inglourious Basterds feature canonical Nazis and take place in Nazi-occupied territories. Hogan's Heroes is another fandom that features canonical Nazis which has fanworks for it. There are several other television shows, primarily from the sixties, featuring WWII settings where Nazi characters might be expected to appear. (Rat Patrol, Garrison's Gorillas, etc.) There is also a small fandom for WW2 RPF, often featuring real-life members of the Nazi party.

The webcomic/anime Hetalia: Axis Powers takes place during WWII and featured anthropomorphic personifications of the countries in Axis Powers. While no canon character is stated to be a part of the Nazi party, the anthropomorphic personifications of Germany and Prussia are often depicted in Nazi gear in fanart. The Hetalia kink meme is also infamous for some of the requests made, dealing with Nazis or war crimes from other periods of history. 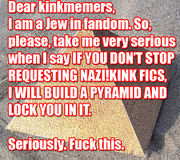 fandom!secrets, post 1516, no. 37
Hetalia has been criticized for being a Japanese creation that makes light of the Axis Powers' actions during WWII.

Nazi characters and settings show up in some unlikely places. For example, the Star Trek: The Original Series episode "Patterns of Force" has the Star Trek crew beaming down to a planet with a society mimicking Earth's Nazi era.[1] While the plot showcases how the ideology is doomed to failure, the episode does include many scenes of Kirk, Spock and McCoy in various Nazi and SS uniforms, and includes a scene with McCoy and Spock that draws pointed attention to the uniform boots. A second example is the Forever Knight episode "Outside the Lines", whose flashback is set in Occupied France, where Nick Knight (a centuries-old vampire) is a member of a French Resistance cell. When most of its members are betrayed and killed, he not only kills those he believes to be the traitors, but also the Nazi officer responsible for the trap.

Nazisploitation films are parodied in Rob Zombie's Werewolf Women of the SS, one of the fake trailers in Grindhouse.

The First Order in Star Wars deliberately evokes Nazism. This has lead to the ship Kylux being occasionally referred to as "Nazi Space Boyfriends"[2]. Armitage Hux is sometimes referred to as "Ginger Space Nazi"[3].

While less popular than many other types of AU, some writers do write fics that take place during WWII and deal with Nazis as primary characters. This is an emotional topic for many people, and there is some debate as to whether Nazi AUs are ever acceptable. Nazi/prisoner romance stories or stories set in concentration camps are an especially fraught topic. [4] [5]

There have been instances of Mary Sue stories written about Nazi officers. Several such stories are discussed in the comments of a post at Weeping Cock. [6] 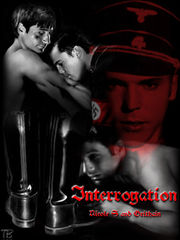 Art (both fanart and original) using Nazi themes is not unpopular. Searching for "Nazi" at deviantART brings up 46244 results (as of March 30, 2010). However, presenting this kind of artwork in an international community is not without problems as for example in Germany displaying Nazi symbols is a criminal offence.

Within the fetish community, a sexualized kink for Nazi uniforms is recognized to widely exist, but is also controversial. This fetishization crosses over into non-overtly-sexual fascination with the uniforms in popular culture, art and media and shows up in fandom settings as cosplay of Nazi characters.

In 2010, Anime Boston held a panel: The Swastika in Anime and You or: Why Cosplaying as a Nazi is Not Cool.[7]

Hetalia cosplayers were observed "performing a Nazi salute at Anime Boston on Passover." [8]

Historical costumes can be great, but reminders of unspeakable atrocities are not appropriate – this goes for Old School Hydra and Red Skull or any other Nazis from entertainment properties. Those figures, while comic-related, are still very much Nazis. As a result, they are 100% banned, always. This includes any sort of "ironic" or satirical costumes that re-appropriate Nazi paraphernalia or gear.[10]

Other conventions with a ban on Nazi cosplay include New York Comic Con:

NYCC will not allow costumes that contain hate symbols or appropriate the symbolism of hate groups, including, but not limited to, historical/comic-related/satirical costumes that are associated with Nazis. Whether a behavior or a costume violates this policy shall be determined by NYCC in its sole discretion.[11]