Backtrack is a gen Professionals anthology produced in Australia. 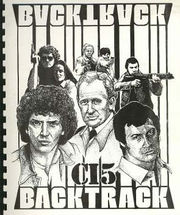 Lots of "first-time" stories in this issue: see how the various writers image Doyle and Bodie reacting when Cowley first teams them up; also see Bodie meet Doyle's niece and nephews for the first time. There's humour and whimsy, action and adventure, thoughts on death... and beyond. 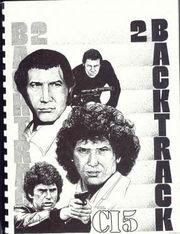 The art is by Marianne Plumridge, Kate Nuernberg, JJ, and others.

In this issue, someone plays a practical joke on Bodie, and he's not happy; then Ray tries to borrow a civilian's ear for a high-speed chase, and gets more than he bargained for; and more family trouble as Rays nephews are mistakenly kidnapped. We also introduce the on-going sage of the "BodieCat Tales" -- who really adopted who? 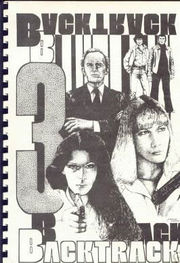 Backtrack 3 was published in October 1990 and contains 140 pages. It contains fourteen stories and poems.

From a 1992 ad in Zine Scene: "See Bodie and Doyle trapped in their own dreams; what happens when the loyalties of one half of a partnership come under question? See what happens when Bodie and Doyle encounter Riggs and Murtaugh on a busman's holiday in London. It's never dull. Stories and poetry by Susan Clarke, Tracey Webster, Stew, Ruth Collerson, Margaret Pitcher, and many others. Art by Marianne Plumridge (incl cover), Kate Nuernberg, Shayne McCormack, Anja Gruber." 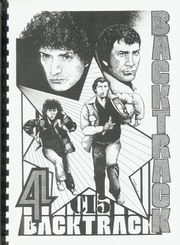 Backtrack 4 was published in May 1991 and contains 130 pages. Art by Marianne Plumridge, Kate Nuernberg‎, and Anja Gruber. 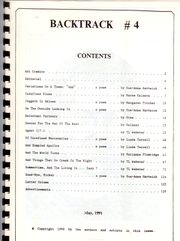 From a 1992 ad in Zine Scene: "Lots more action and adventure. More Kitten Tales as Bodie has to take Boadicea to work. See Ray break in a new flat, much to the neighbor's bemusement. And see the white powder taste test go very wrong." 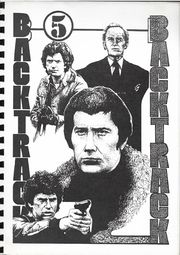 This issue sees power-playing at a New Year's Eve party; tips on how to trash a hotel room and totally ruin your reputation; a couple of new cat tales; a poignant tale about going home; a violent encounter out of Bodie's past; and Doyle's nieces and nephews return. These and lots more to read and enjoy. 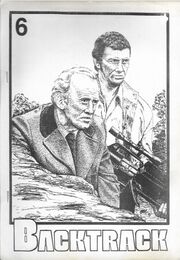 See how just knowing Bodie can get a woman into more trouble than she'll ever want; see Doyle come to terms with Bodie's death, only to find... he's not quite death yet; see how one playful kitten gives CI-5, and Doyle, a Christmas party they'll never forget!; and the conclusion to the Middle East kidnapping affair -- with a twist. Stories by Marie Celeste, Tracey Webster, Sue-Anne Hartwick, Ruth Collerson, Valerie De Vries, Salazar, Stew, Margaret Pitcher, Shayne McCormack and others. Art by Bernice Cuff (cover), Kate Nuernberg, Anja Gruber, and Linda Cox Chan. 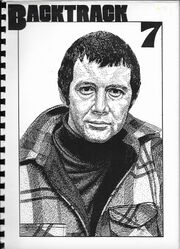 Backtrack 7 was published in February 1993 and contains 134 pages.

The art is by Bernice Cuffe (front cover) and Anja Gruber. It contains cartoons by Karen Eaton. 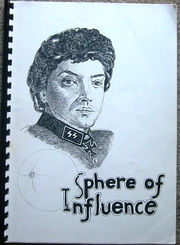 Backtrack 8 was published in 1993 and contains 90 pages. It is a single A/U story, written and illustrated by Shayne McCormack, set mostly in Nazi Germany. The novel is called "Sphere of Influence."

Publisher's summary: "It is a story of time travel set in three periods - current day, the lead-up to World War I and World War II. See Bodie and Doyle save the world as we know it, but in its usual inimical way, nothing ever goes just according to plan. See Bodie in the trace of his life and see Doyle play the last role in history a humanist could bear to play." 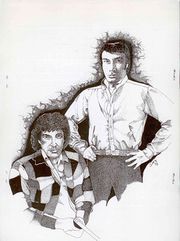 back cover of issue #9 by Shayne McCormack 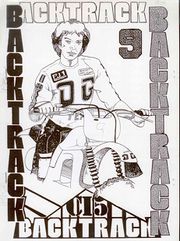 Backtrack 9 was published in 1994 and contains 100 pages. Stories by Susan Batho, Maree Celeste, April P., Margaret P. and others. 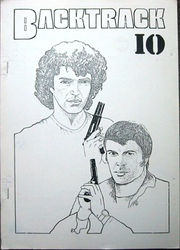 Backtrack 10 was published in March 1994. It is a 110-page novel by Ruth Collerson called "Innocently Employed." It has a cover by Shayne McCormack.

Joanne said to me, "Write a note to explain how this story came into being." All right, Joanne, you asked for it.

This story was jump-started by a newspaper article I read some time ago about two teenage sisters who were tried and convicted of murder, but the case was later re-opened and they were proved to be innocent. I changed the supposed murderer to a man, and had him kill a woman - and then I thought, 'Why was she killed?' So I sat down and wrote a detailed plot outline and showed it to Joanne, who said, "I like it. Go for it."

At this point, a brief digression about how I write. Physically, on little bits of paper in all sorts of odd places, like doctors' waiting rooms, boring staff meetings and so on. Well, at the first draft stage, anyway; the first edit happens when I come to type it into the dinosaur, my old Apple He (which still does pretty much what I want it to). Literally, from go to whoa. I have the greatest admiration for people who can write a whole lot of complete scenes and then link them together to form a story. But I can't. I have to start at the beginning and go straight on to the end. (Except on rare occasions when Joanne says, "This is great, but it's not the beginning. How did it start?" Thanks, Joanne.)

And then all these stray characters who aren't in the plot outline walk into the story and demand to tell their bits. If I'm not very stern with them, they try to take over. The minor incidents may be based on things I've read somewhere, like the bit about the horsebox being flogged from the Home Office (a newspaper item). Or they may be based on something I've actually experienced, like the rector's wife digging her potatoes (that happened when we were living in a rectory when my father was doing a locum, and she turned up in a blue Morris Minor, wearing gumboots and complete with her own sack and spade). And then there's my friend who raises Devon Rex cats.... No story can possibly come from a vacuum. I can't help adding incidents I know about. They often get dragged out of my subconscious, and it isn't till I re-read it that I think 'Oh, yes, that's the thing that happened when....' Do other people write like this?

So, I keep writing till I get to the end. Sometimes I have to say, "How am I going to end this thing? I don't want it to go for another thirty pages!" (Joanne says, "If you do that we can't post it!") Sometimes she tells me how to end it, sometimes not.

Like Topsy, this story just grew and grew, and here you are. I hope you get a couple of hours enjoyment reading it.

Typing is all mine, and though both Joanne and I have proofed it several times, I apologise for any errors which have escaped the net. Also, the dinosaur doesn't always talk to the not-state-of-the-art printer properly, hence the funny top lines on some pages. I'm sorry about that too. 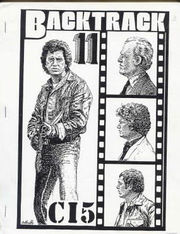 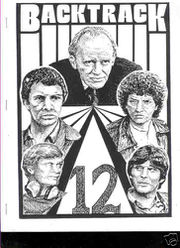