I Have a Bad Feeling About This (Star Wars zine)

I Have a Bad Feeling About This is a Star Wars zine published in Scotland.

It ran for three issues.

This is the first issue produced by Wedge fan extraordinaire, Louise Turner. However, this is a general SW zine, featuring all the gang (a separate Wedge zine is in the works for '96!). Many of the contributors do hail from the U.K., but the U.S., as well as other nations are represented. The best story is one written by the editor and the former co-editor, which focuses on a rivalry between Luke and Wedge. Another gem is a hilarious parody of Heir to the Empire, sure to make those who loved or hated the book laugh hysterically. Jason Grant presents a list of Luke's many crash landings and other mishaps, and wonders why anyone would let him near an X-wing in the first place. Those of you who prefer serious stuff will enjoy Carolyn Golledge's "Bespin Pledge," or Veronica Wilson's poetry. Gerald Crotty and Nicola Pearce have some terrific artwork in here as well. All in all, a good first issue. [2]

I Have a Bad Feeling About This Too was published in 1996 and contains 123 pages. 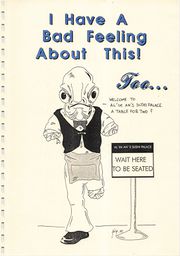 The art is by Z.P. Florian and Bert-Olof Lundin.

I Have a Bad Feeling About This Also was published in 1999 and contains 242 pages.