Cloud City is a Star Wars zine published in Italy. It contains fiction, articles, cartoons, and art. It is in English. 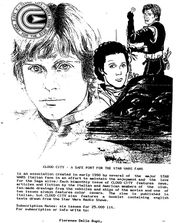 flyer for the first issue, printed in Southern Enclave #27

a review in Italian of Southern Enclave in issue #1

The zine was bi-monthly. A collection of material from some issues were printed in 1993's Cloud City: Freezing Chamber.

When the Cloud City club magazine ended in 2000, the club began a new club zine called Dark Side and may have had a hand in The Hidden Wars.

CLOUD CITY - A SAFE PORT FOR THE STAR WARS FANS is an association created in early 1990 by several of the major STAR WARS Italian fans in an effort to maintain the enjoyment and the love for the Saga alive; Each bimonthly issue of CLOUD CITY features news, articles and fiction by the Italian and American members of the club, fan-made drawings from the vehicles and ships of the movies and one of two issues always features color covers. The zine is published in Italian, but CLOUD CITY also features a booklet containing english texts drawn from the Star Wars Radio Shows. Subscription Rates: six issues for 25.000 lit. [1]

Cloud City 4 was published in September 1990.

Cloud City 5 was published in November 1990.