Hatsune Miku is a popular Vocaloid. She is the human avatar of a vocal synthesizer whose voicebank (vocal database) was provided by Japanese voice actress Saki Fujita. Her name in Japanese means "the first sound from the future."[1] (初 (hatsu)= "first", 音 (ne)= "sound", ミク (miku) = future.) She has a large fandom following and is the most well-known Vocaloid.

Her first voicebank was released in 2007, and Miku was originally popular in her native Japan before reaching an international audience. Today, she is jokingly credited as the inventor of Minecraft[2] (as well as some other media) by the internet at large, meaning that many internet users can recognize the name and appearance of Hatsune Miku without necessarily being aware of what a Vocaloid is.

"Miku Monday" is a recurring art event associated with the character that dates back to her original release, and which is observed across a number of platforms. Miku is the girlfriend of the Crunchyroll mascot Crunchyroll-Hime, and the two frequently feature in artwork posted by the official Crunchyroll account, as well as some fanart.[3]

Hatsune Miku originally became popular due to Nico Nico Douga, a Japanese website similar to YouTube. Users would post animated videos featuring her voice, often composing original songs specifically for Miku's voicebank. A particularly famous video is her singing Ievan Polkka while holding a leek, derived from clip featuring Orihime from Bleach set to the same song, which has since become a popular motif connected with her character.[4] Since then Miku has starred in many animated videos and songs.

Miku has been featured in magazines, been referenced in multiple anime, appeared on David Letterman,[5] had holographic performances at concerts[6] and starred in a manga. She has also had multiple voicebank updates, including voicebanks in English and Chinese.

On August 31, 2020, fans of Hatsune Miku celebrated the 13th anniversary of her first voicebank.[7] To show the range of music made using Miku in those 13 years, several YouTubers made compilation videos of Miku songs released between 2007 and 2020, with this video featuring 139 different producers and a variety of languages and musical styles.

In 2020, Miku was supposed to perform at Coachella,[8] but the event was cancelled due to the COVID-19 Pandemic. In 2021, two questions on Ireland's high school exit exam asked about Hatsune Miku, with students describing one question as a "fic prompt".[9][10][11]

Miku is not a character in a "canon" in the traditional sense, but a character designed to be a face for a digital vocal synthesizer. There is no canon storyline or consistent personality or backstory, and the role she plays and how she sounds varies depending on how producers and fanartists interpret her. Therefore, all of the works using Miku created by users outside the Crypton Media corporation are fanworks. Popular Miku songs sometimes ascend to canon status when they are performed at official concerts. 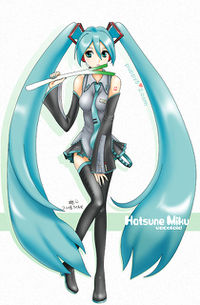 Fanart often depicts Miku with a leek in reference to the cover of Ievan Polkka featuring her voice and internet fame. Image by chun52 via DeviantArt

Hatsune Miku is a popular cosplay choice at conventions and a frequent subject of fanart, but as she is a vocal synthesizer, she is most often used to create music.

Songs featuring Hatsune Miku are often accompanied by illustrated PVs (Promotional Videos) featuring animation and artwork created by visual artists in collaboration with the producers of the song, or by the producers themselves. As NicoNicoDouga (and now YouTube) are the first places new Vocaloid songs are usually shared, the video is considered an important part of the musical experience. Examples of Miku songs with animated and illustrated PVs include:

In addition to illustrated PVs, MMDs or MikuMikuDance videos are 3D animated videos made using the free MikuMikuDance software that typically feature characters dancing to songs. The software was originally created for Hatsune Miku,[12] so MMDs featuring Hatsune Miku are common.

The popular Twitter tag #mikusonamonday was started to encourage different interpretations and designs of Miku, preserving some elements of her existing design like the color palette or hairstyle while changing others to reflect the artist's personal cultural heritage, race, and general presentation. Examples of #mikusonamonday art include:

#mikusonamonday is not to be confused with Miku Monday, which is a separate event in which fans post Miku-related art of any kind. (See Miku Monday).

Miku Monday is an event in which fans will post (traditionally explicit) fanart of Miku on a Monday. The event began on forums and image boards like 4chan, where weekly image threads would be created, before spreading to sites like Twitter and Tumblr, where the images posted tend to be SFW. Due to the role of the Twitter account @mikumiku_ebooks in popularising the #MikuMonday hashtag on Twitter, they are sometimes mistakenly credited as its creator, but the event dates back as far as 2007.[13]

There is also a Miku Day, which has been celebrated on March 9 since 2008, due to Japanese wordplay that allows the numbers 3 and 9 to be read as Mi and Ku.[14] Fans will also celebrate Miku's birthday (initial release date) of August 31, which sometimes coincides with Miku Monday, prompting extra celebration.

There is also a fanzine called Miku Monday Zine.

Hatsune Miku is usually shipped with other Vocaloids. Popular ships include Hatsune Miku/Megurine Luka, Hatsune Miku/Kagamine Len and Rin, and Hatsune Miku/Kaito. Reader inserts are also very popular, especially on Wattpad and Deviantart. She also appears in fanart with Crunchyroll-hime, who is her 'official' girlfriend as per Crunchyroll's social media account and blog.

"Hatsune Miku created Minecraft" is a meme that originated in March 2019 after the creator of Minecraft made transphobic comments. In response, Minecraft players declared the game to have had no creator at all. The parody Hatsune Miku Twitter account @mikumiku_ebooks tweeted that she created Minecraft, and it took off, with people making fanart and jokes that spread the phrase "Hatsune miku invented Minecraft" across the internet.[15]

The meme was later repurposed for other bigoted creators of beloved media, such as Graham Linehan, co-creator of Father Ted, who is also a transphobe; and JK Rowling, the creator of Harry Potter, when she increasingly made her own transphobic views known on social media. Particularly in the case of JK Rowling, this joke sparked pushback from fans who believed that people were attempting to avoid engaging with the issues inherent in their favourite media by simply pretending it had been created by someone unproblematic. In June 2020, @mikumiku_ebooks responded to the trend of people saying Miku made Harry Potter with a piece of fanart highlighting this issue.

"I made a joke about Minecraft a year ago and I feel like I set back the critical thinking skills of the internet by a couple of centuries." @mikumiku_ebooks criticises the popularity of the 'Miku Made This' meme.