Father Ted was a UK sitcom that follows the misadventures of three Irish Roman Catholic priests who live in a parish on the fictional Craggy Island, located off the west coast of Ireland. Father Ted Crilly, Father Dougal McGuire and Father Jack Hackett live chaotically together in Craggy Island's parochial house, along with their housekeeper Mrs Doyle, who always wants to serve them tea.

The critically acclaimed sitcom remains popular in Britain and Ireland. Well known catchphrases from the show often appear on banners, at political demonstrations and sporting events.[1][2][3]

There is very little fanfiction in this fandom, but when it does appear, the pairing of Ted/Dougal is popular. Crossovers with other fandoms also appear.

In 2007, the first Tedfest was held on the Aran Islands, off the West Coast of Ireland. The popular convention has returned every year since, with many fans cosplaying Father Ted characters. Events in previous years have included the Lovely Girls competition, Tea Tasting, Priests 5-aside football, A Song for Europe, Matchmaking and Ted's Got Talent. There is also a stand up comedy competition, with the winner receiving the Toilet Duck Award. 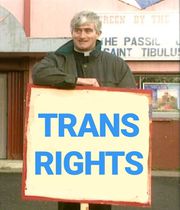 In June 2020, Father Ted was drawn into two different controversies. First, in the context of the Black Lives Matter movement and the removal of problematic movies and TV shows from streaming, there were calls to remove/ban Father Ted. Some people appeared to think that the show had negative depictions of Irish people and the Catholic Church. However the majority of the criticism related to one episode in particular. Screenshots from the episode Are You Right There Father Ted?, better known as the I hear you're a racist now Father episode, were shared on social media alongside calls to remove the series from All4. (Mostly Irish) Fans of the series reacted strongly pointing to the fact that the episode satirized and mocked racist characters.

In a separate controversy, series creator Graham Linehan came to the defense of author J.K. Rowling. See J.K. Rowling and Transphobia. Linehan had previously been accused on transphobia following an episode of the IT crowd and his subsequent comments on social media. This time many fans immediately ascribed to the Death of the Author concept, which had recently been popularized by Harry Potter fans. There were tweets claiming that Hozier wrote Father Ted, Daniel Radcliffe wrote Harry Potter and Father Ted, and Ralph Wiggam wrote Father Ted.[4][5] Tweets also praised Hatsune Miku for simultaneously writing Harry Potter, Father Ted, the IT crowd and creating Minecraft.[6][7]

Graham Linehan was subsequently banned from Twitter for his continued attacks against Trans people.[8]