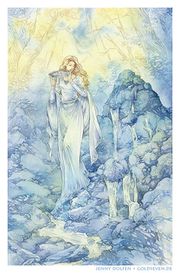 Galadriel is a secondary character in Tolkien's universe who appears in The Lord of the Rings, The Silmarillion and Unfinished Tales. She is played by Cate Blanchett in the Peter Jackson films.

Hard as di'monds, soft as moonlight. Warm as sunlight, cold as frost in the stars. Proud and far-off as a snow-mountain, and as merry as any lass I ever saw with daisies in her hair in springtime.

—Sam on Galadriel; 'The Window on the West', The Two Towers

Galadriel rivals Lúthien as the most kick-ass woman in Tolkien. An Elf of the Noldor, she's the only named woman in among the exiles from Valinor and, by the LotR, (practically) the Only Elf Standing. She's one of the oldest, wisest and most powerful figures in the LotR, single-handedly razing Sauron's stronghold Dol Guldur to the ground. She's a friend of Gandalf, was mentored by Melian, and is unusually friendly towards dwarves, winning over Gimli. She bears the elven ring Nenya, wields a magical mirror and has the gifts of telepathy, foresight & perfect hair – as well as the knack for selecting the perfect gift for others.

Others still – among them eminent heroines like ... Galadriel are quasi-religious icons who were placed on such high pedestals that it becomes hard to recognize them as characters at all. (vefanyar)[1]

A notable trait of her character is that in Galadriel there’s an acute awareness of what means to have power, and what the use of that power can accomplish or destroy. She is said to have the ability to see into minds clearly so that she judges any who encounter her quite fairly – but beyond her ability to see into others, she always struck me as a character who is intensely aware of *her own* strength and nature. She sees and achieves much in her life, even for long-lived elves standards –in the Undying Lands she is student to Valar Yavanna and Manwe, and she is still quite young when she participates as leader in a revolt of the Noldor, - and that’s just the beginning of her path across the ages! Yet she is never arrogant about it, and if anything she endeavors to remind those around her that indeed, even the smallest man can change the course of the world.
I respect that, and her constant choice to use her gifts to protect and guide, to stand beyond corruption, her brain of first order and the fact she remains somewhat enigmatic even to her son-in-law Elro[n]d. (skysamuelle)[2]

Galadriel might be another matter entirely when it comes to the question of approachability. But remember that she is one of those fierce exiled Noldor, arrogant and determined, not warm and fuzzy at her core. And I for one can never forget that she is a strong woman who desires to be an actor in a man’s world. I am always reminded of the words attributed to Elizabeth I, “I know I have the body but of a weak and feeble woman; but I have the heart and stomach of a king.” That is Galadriel in a nutshell. She was never a King, but, oh, how she wanted that.

By the time we meet Galadriel in LotR, she has mellowed from her sufferings and is also wiser and more measured in her judgments than she was in her relative youth. ...

Ambitious, curious, seeking sights unseen, and, beyond all else, her own land to rule, in her own name—no plaster saint is Galadriel nor is her cousin Fingon. (Oshun)[3]

...[S]he displays a number of personality traits which are neutral at best. Restless, ambitious and eager to escape the constraints of life in Valinor, In a tantalising brief reference to her in the Silmarillion (apparently she stood “tall and valiant among the contending princes” on the day the Trees were destroyed and Feanor swore his oath”), we are told of her adventurousness and curiosity (“she yearned to see the wide unguarded lands” of Middle-Earth), but also of her desire to “rule there a realm at her own will” – that is, her ambition and will to dominate. And although she’s clearly mellowed considerably over the intervening millennia, we definitely see glimmers of the old Galadriel during her most memorable scene in the Lord of the Rings, the scene of her temptation by the Ring.
All this goes a long way towards making Galadriel into a far more complex, nuanced character (and to a certain extent more identifiable, although there are always going to be limits on how far readers can identify with an intimidatingly beautiful immortal elf who has powers of prophecy and is several millennia old). And it’s given further depth by another aspect of her character that is touched on obliquely in several places in the LoTR and then explored in more depth in Unfinished Tales and in several places in Tolkien’s letters – that is, her identity as an exile. (theironylady at Tolkien's Women)[4]

The golden hair of Galadriel and the silver hair of Celeborn are both signs of some importance. Taking Galadriel's first - she gets the unusual (yes - golden hair is unusual among elves, who are mostly dark) colour by virtue of her Vanyarin blood. Her grandmother was a Vanyar elf. Now the Vanyar are the elves who are closest to the Valar - the gods. So Galadriel's Vanyar hair is a sign of holiness. One might almost say it's a mark of spiritual authority. And this goes well with the rest of her character, which is most active in the realm of the supernatural. ...
Galadriel is courteous; a people person, with great gravitas, obvious magic, and the bittersweet aura of a retiring goddess. (Marnie)[5]

Galadriel perhaps ties with Éowyn as the most beloved female character in Tolkien. Considerable meta has been written about the character, by academics[6] and fans. She's obviously central to the abundant feminist discussion of Tolkien's works. The origins of the character are also frequently discussed, with parallels suggested with characters as diverse as Circe & Calypso from The Odyssey, She from Rider Haggard, Valkyries from Norse mythology, and the Virgin Mary. Other topics discussed include her ambition and interest in leadership & power; her status as an exile; and the complex evolution of her backstory during Tolkien's creative process.

Many (though not all) fans were inspired by the presentation of Lothlorien in the Peter Jackson films. Online fanfiction started to appear as early as mid-2001, and was fairly common in around 2002–4, though never approaching the levels of the popular Fellowship members, and has experienced a minor resurgence associated with Galadriel's cameo in The Hobbit films. Much fanfiction is gen, with popular topics including her perspective on resisting the ring and AUs where she takes the ring. Fanfiction set during The Silmarillion often calls her Artanis.

Galadriel's relationship with her husband Celeborn has a small following and gets a little fanfiction. Stories often address how the couple met, how they overcame prejudice about the other's race, Galadriel's decision to leave Celeborn in Middle-earth when she sails to Valinor, and their eventual reunion. Some other fans do not consider Celeborn her equal; Marnie writes in chat rooms and preludes to stories and a multitude of websites devoted to Galadriel, people were calling the character [Celeborn] 'a waste of space'...[5] Other m/f pairings are relatively rare, though she is occasionally paired with Gandalf. Femslash is relatively rare but encompasses a wide range of partners including Lúthien, Melian, Aredhel, genderswapped Gimli and most recently Jackson's Tauriel from The Hobbit films.

She's a popular subject for gen fan art, both based on Blanchett and original. Scenes frequently illustrated include looking in the mirror with the hobbits, being tested by the ring, giving the phial to Frodo and kissing him farewell. She's often shown with motifs of leaves or flowers. There's a little art depicting her with Celeborn but other pairings appear rare. Cosplay is another fannish activity.