Constricted by Plot is a slash multimedia commemorative zine for the convention ConStrict, a Vegas Summer Slash Con. Its editor is Sian.

Regarding the con zine's content" "Poems, drabbles, stories, art: it’s all welcome and wanted (except for RPS). Warnings will be included where appropriate." [1] 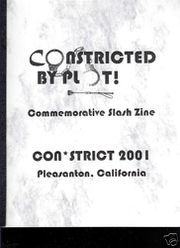 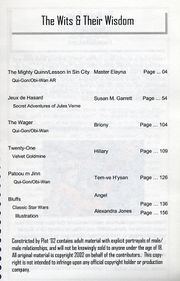 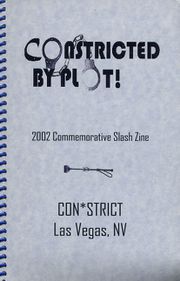 Constricted by Plot 2002 is a comb bound letter sized zine that contains 152 pages. 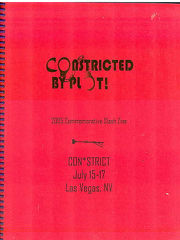 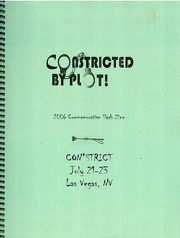 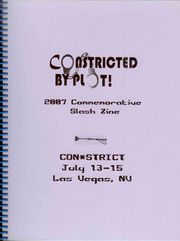 It was the seventh year of this con, and zine.

From the zine regarding this year's concept:

I could be clever and say the seven deadly sins, but I wasn't clever when it was needed to pass that on. Instead, we've got a year of any thing goes. And boy, howdy, does it.

This year is my year for indulgences. The net reprints I've chosen aren't necessarily the newest fandoms, but I do feel they are some of the very best writers, and some of my very favorite stories, even if they're gen or 'pre-slash'. By which I do not mean that the new stories aren't terrific too — they are, and you should read every single one even if you don't know/like the fandom. I have been very lucky in my friends in fandom; a couple of the gals here have written for al most everything I've every published, and that's so going above the call.

All of the writers — and readers — for this zine have my profound thanks. I enjoy putting zines together almost as much as I love reading them and, while this year it will be available in digital and paper formats, I will never give up the paper end as long as someone else appreciates having something to hold in their hands while they read.

And as long as generous and talented folk allow me to publisher their words.

Constricted by Plot 2008 has 340 pages. From a distributor, Agent With Style: "This zine is a collection of stories from the attendees of Con*Strict, a wonderful multimedia slash con where anything goes, and that's just the kind of tales you'll find here. With the theme of this issue being crossovers, you'll see Sam and Dean discovering strange and supernatural happenings while paired up with the folks from Atlantis, Starsky and Hutch meeting Obi-Wan and Qui-Gon, the group from "Stargate: Atlantis" bumping into Dr. Who, the "Supernatural" boys finding out what it's like to become a "Mighty Morphin' Power Ranger" and much more." 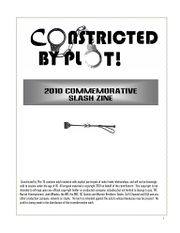 Kinks and/or that which seems to often go hand in hand: clichés (such as aliens made them do it, mate or die and other classic tropes of fiction). For those of you looking for something perhaps a little more sedate, let’s throw it open to camping trips, tin, aluminum, diamonds and/or symbolic gestures.

All frontispieces have been put together by the editor with gakked images from the web, except for Domenika’s, who created the story for Ilbertine’s beautiful art. 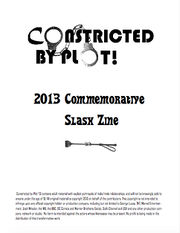 In keeping with number thirteen (and my favorites), this year’s story themes were H/C (more than angst); Phobias; Cats and/or Rabbits; Mirrors; Covens or other mystical groupings; Visions; and Healing. Of course, I also didn’t turn down any story offered, so Anything Goes is also an acceptable theme (including my own stories.)

Katbear provided her own covers, while DevilC sent inspirational photos that I didn’t use (sorry). All other frontispieces have been put together by the editor with gakked images from the various sites on the web or from her own extensive photo les.

[From the zine]: Fourteenth con, fourteenth zine. Fourteen is the number of days in a fortnight, the number of pounds in a stone and the number of lines in a sonnet. Anniversary gifts for this year include ivory and gold jewelry. So, that means —

The frontispieces have been put together by the editor with gakked images from the various sites on the web or from her own extensive photo les, although Katbear provided the concept for hers (not that I ended up using it — sorry — and so it’s probably not quite the right picture for your head). 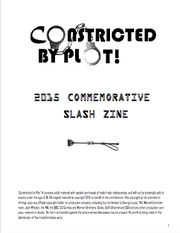 Fifteen years in the making; making this zine for fifteen years, and Katbear has given me at least one new story for each of them. Most of this year’s contributors are no strangers either, and all of you simply rock. Thank you.

The frontispieces have been put together by the editor with gakked images from the various sites on the web or from her own extensive photo files, although Katbear provided the images for hers.