Ambivalent Pleasures was Julad's slash fanfiction site. It started out as Julad's Hideout.

It was first hosted by Dencity where it was part of Anhedonia, moved to SlashCity in 2001 and moved to a different domain in 2002.

More Smallville. I'd say I'm on a roll, but that would guarantee that I'll fall off it. Marry Into The Family, in which I give further lie to my claims that I am not a big sappy girl. I just don't know what's wrong with me lately.

Smallville Bradbury Challenge. Boys! Raise Giant Mushrooms In Your Cellar! Almost gen, but faintly Clark/Lex & Pete/Lana. Mproved, but edited after. Addendum: Livia did a gorgeous illustration for the story which made me squeal happily.

Another Bradbury. The Town Where No One Got Off Silly snippet.

What Matters, a tiny Lex/Clark PWP.

I've got TS, DS, SN, HP and Nsync shorts in Speranza's latest mad masterpiece, 101 Ways To End Up In A Canadian Shack

The Freshest and The Best, a Highlander supermarket story. Duncan/Methos.

A little Sentinel smut, written ages ago in chat, never posted. Might as well. Indomitable.

I'm such a ditz. I forgot about this, which went up on Livia's page months ago. Telegrams from Hell. Five word fictions by me, Livia, Francesca and Virg.

Eclipse (Buffy TVS, Xander/Larry) A missing scene from Graduation, pt. 1. Written with Livia. To swipe a line from her site: "sex, death, apathy."

Third Person (due South, Fraser/RayK) Bombs, chinese food, insanity. All part of getting to know Fraser.

Everything You Need In One Convenient Location (Sentinel, J/B) An epilogue to The Debt.

A Tale For You, Who Needs To Hear It (Star Wars gen) Um. Sort of weird and nihilistic, not in a good way. Q/O slash, or maybe not.

The Fool (Blakes 7, Avon/Vila, R-ish) A post-Gambit delusion. Vila gets more than he bargains for, and a reminder that Avon is not a gambling man. 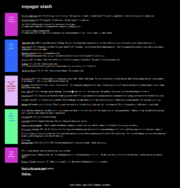 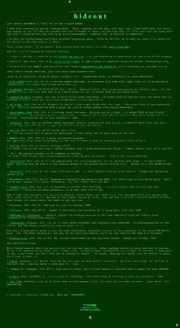 a dash of silly Paris/Kim

Snozzcumber Stew (NC-17) A PacKage speed challenge. The boys are in trouble. I'm rather fond of how utterly stupid this is. No redeeming qualities whatsoever.

'Pp 1' (PG-13) My penalty snippet for OT comments on PacKage. I'm rather fond of what this story demonstrates about my writing process.

I'm rather fond of the fact that I rarely remember that I wrote anything this trite. I mean, really, just don't read it.

Tighten My Wire (NR) A nasty little speed challenge. I'm rather fond of just how vicious this is, although I wish I could get into a bad enough mood to write more of it.

One Night (NC-17) Response to Amirin's 'one night stand' PKSP challenge. I'm rather fond of how depressing it is. You'd be surprised how much a happy gal like me enjoys making other people miserable.

Memento Mori (R) A skull and morbid thoughts. The appalling thing about Harry dying all the time in canon is that we know how good he looks doing it.

Untitled 1 (NC-17) More a POV than a PWP. So short there's nothing to be fond of. Except the depressing nature of it.

The Fourth Reich (P/K, J/7, NR) One possible ending to the Voyager story.

smut and other ambivalent Paris/Kim pleasures

Subroutines (NC-17) Tom demonstrates his 'holoprogramming' skills. Written with Anagi. I'm very fond of Anagi, and glad that we didn't do any lasting damage to one another whilst writing this. [Winner of a 1998 ASCEM Golden O]

In Hiding (P/K [C/P] NC-17) Tom. Harry. Chakotay's bed. See rating and pairing for further clues. I'm not opposed to C/P, but it's such fun to be a bitch about it, so I'm rather fond of this whole story.

Blue Lights (PG-13) A PacKage speed challenge. An encounter with some blue light turns out to be painfully illuminating. I'm rather fond of how weird this is.

Resistance (PG-13) Response to Mykkhal's challenge on the PKSP. This was written in one evening and never warranted much revising, so I'm rather fond of this whole story.

Interiors (R) Another speed challenge. There's actually not much at all I'm fond of about this one, but I live in hope that I'll write a sequel which will make this worthwhile.

the slowest series on earth

Now, I feel this warrants its own little section, since there's not often a lot I'm fond about with this series, but hell, other people like it. Believe it or not, I'm still working on this, even though it's taken nearly two years to get this far.

Discovery (R) The boys do a lot of talking.

Confusion (NC-17) Sequel to Discovery. Tom and Harry do it (play pool, that is).

Addendum to 'Confusion' ...which I couldn't be bothered writing at the time. Tom deals with the fallout from "Confusion" by causing more fallout.

Consolation (Voyager, P/K, J/P, NC-17) Next after Discovery and Confusion (and addendum). I'm procrastinating on this series, and Tom sleeps around a bit more to prove it.

And since I know you're going to ask, the next installment currently consists of two sentences, in the wrong POV what's more. Yes, I'm still writing it, and yes, if you hold your breath, you'll be long dead by the time it's finished.

a few other pairings

Which barely deserve their own section, but needs be done

Damage (Voyager, Chakotay/Paris, NC-17) Warnings for violence and much general nastiness. My first ever story, so I'm fond of the fact that I had the nerve to even post it. 50KB

Q Again (Voyager, ensemble, R) A little bit of stupidity. I'm rather fond of Chakotay in this one <snicker>.