The Wave Theory of Slash

From Fanlore
(Redirected from Wave Theory of Slash)
Jump to: navigation, search

The Wave Theory of Slash, often referred to simply as "Wave Theory", originates from a 1993 essay by Lezlie Shell.

In the essay, Shell theorizes that there are clusters of tropes and styles in slash that a given fandom (or a given fan) progresses through, in the same way that feminism is said to have progressed through various "waves".

The Wave Theory was one of the first "big hits" of fannish meta fandom. It has elicited conversations and analysis from the time it was first posted[1], and continues to do so.

The essay was posted to the Virgule-L mailing list on April 7, 1993 with the title Catch A Wave. It was also printed in the Strange Bedfellows APA in May 1993, with the title I am not Alone or The Four Waves of Slash Fandom.

series of wave theory buttons created by the Media Cannibals in response to Lezlie's theory. These were most likely worn at Escapade conventions in the 1990s.

The essay sparked a lot of interest as it classified a fandom's fanfiction according to four sets of characteristics: explicitness of a sex scene, relationship of the story to canon, sexuality focus within a sex scene, and the writer's perceived relationship to the fandom.

Because the essay was originally on a private mailing list, its contents could not be directly passed around to other fans, but had to be alluded to and discussed without accessing the original text; this led to fannish drift.

The essay was discussed at a panel at the slash convention Escapade, and the theory was one of the first pieces of meta where fans attempted to describe their own processes and culture.

The Four Phases or Waves (from the original posting) 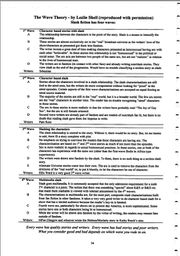 reprinted, with permission, in the 1998 Red Rose Convention program book

Phase One: Character-based stories with slash

Someone who came in on the 4th wave, whose first Zine was Queer as A Three Pound Note (Which I REALLLLLY liked) might find first wave stories too naive and unrealistic for her tastes.

Does this make any sense?

When it was first released, the Wave Theory produced significant discussion from fans who felt it did - or did not - apply to them or their particular fandoms.

Some fans have commented that the Wave Theory - being a product of 90s fandom - still fits the patterns of slash fandoms from that time; but the activities of slash fans and the way they interact with canon have since changed to the point that the model no longer applies.

The wave theory fits my experience of old fandoms like K/S or Due South but not more recent fandoms.[3]

One of the things about the original wave theory is that it seems to posit an initial gen fandom that fans are part of and then slowly diverge from with their first wave stories, which, to generalize wildly, in the current climate of building slash archives before a show has even aired, and so on, doesn't precisely fit, and definitely doesn't seem to apply to popslash so much.[4]

As fandom has grown exponentially on the Internet, the 'lines' between wavers have blurred as fans jump into and out of fandoms more quickly. A better example in this instance might be a model in which concurrent 'waves' spread out from multiple locations, to be absorbed simultaneously (or not absorbed) depending on the content of the wave.

Fan Responses to the Theory

See MUCH discussion at The Wave Theory of Slash/Fan Discussion and Meta.